A Simple Favor Is A Delightfully Unhinged Comedic Thriller 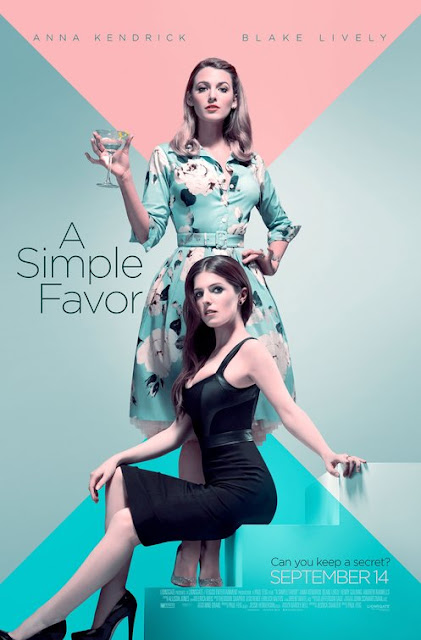 A Simple Favor is the latest in a long line of movies to be woefully mismarketed. Conventional trailers and commercials for the latest Paul Feig directorial effort try to portray the feature as being in the vein of recent financially lucrative Fall thrillers like The Girl On The Train and Gone Girl, but A Simple Favor is far different than those two movies. Instead of being a straightforward dramatic thriller, A Simple Favor is instead a movie that is to loopy thrillers what Rampage was to big monster movies, a big-budget star-studded homage to that just revels in all kinds of trashy twists and "Gotcha!" shock moments. Also like Rampage, A Simple Favor is super fun to watch.

Mommy video blogger Stephanie Smothers (Anna Kendrick) lives by the words of Mike Ehrmantraut by refusing to do things in half-measures. When it comes to anything in her young child's life, she thrusts herself into it head-first, she signs herself up for every possible volunteer position at her son's elementary school, for instance, and that's only the tip of the iceberg for how committed she is to doing as much as she can as a mother. You'd think she wouldn't have much in common with fellow mom Emily Nelson (Blake Lively), who's so detached from the whole parenting gig, but it turns out these two seemingly polar opposites end up becoming best buds in no time as they bond over long conversations and martini's during their son's play dates.

In their initial interactions together, particularly in a conversation that reveals that Stephanie Smothers has a quasi-incestuous skeleton in her closet, that A Simple Favor slowly unveils that it's a far more risque and unhinged creature than its clean-cut suburban exterior up to that point would suggest. Things only get more delirious once Emily abruptly goes missing and Stephanie Smothers once again immerses herself in a set goal with that goal entailing her getting to the bottom of finding out what happened to Emily. Watching Anna Kendrick become her own version of Hercule Peroit turns out to be a whole lot of fun to watch, especially since Kendrick maintains her trademark brand of everyday awkwardness in the midst of her sleuthing.

As Smothers tries to uncover more and more secrets about Emily's mysterious past, all the while getting closer and closer to her husband Sean Townsend (Henry Golding whose work here proves Crazy Rich Asians was no fluke, this guy just oozes classic movie star charisma), A Simple Favor indulges in delightful twists and moments of "DUN DUN DUN!" suspense like there's no tomorrow. Logic gets tossed to the wind in scenes like Smothers removing all of Emily Nelson's clothes from her closet...only for the clothes to suddenly be put back up when she next returns to said closet!! Does that scene make any sense from any perspective? Of course not. Is it fun to watch in the way it's executed here? Very much so!

A Simple Favor is very much more interested in grandiose narrative zigzags meant to make you go "WHAT??" in disbelief more than anything else and the cast & crew commit to that sensibility wonderfully. Though director Paul Feig has been mostly known for doing more smaller-scale comedies with lead characters that are very much rooted in reality, he handles the more heightened aesthetic found in Jessica Sharzer's sharply written script wonderfully. On a downer note, I did find myself wishing the visual style of the movie wasn't so constantly artificial looking, more theatrical visual elements in his direction and in John Schwartzman's cinematography would have really made this film feel like a successor to the classic thrillers it's clearly channeling.

Excelling on a visual level in this motion picture without question is the costumes, Renee Ehrlich Kalfus gives the two lead characters vastly different but equally distinctive wardrobes that nicely reflect their wardrobes, with Emily especially getting to walk around in some over-the-top pieces of attire that nicely reflect her characters upper-class sensibilities. The costumes are, like the performances and the story, dialed up to 11 in A Simple Favor, a movie that constantly demonstrates an unexpected but welcome twisted sense of fun that results in some real surprises, including an unintentional(?) homage to the scene in Spider-Man where all the New Yorkers throw trash at the Green Goblin.
Posted by Douglas Laman (NerdInTheBasement) at 11:10 AM