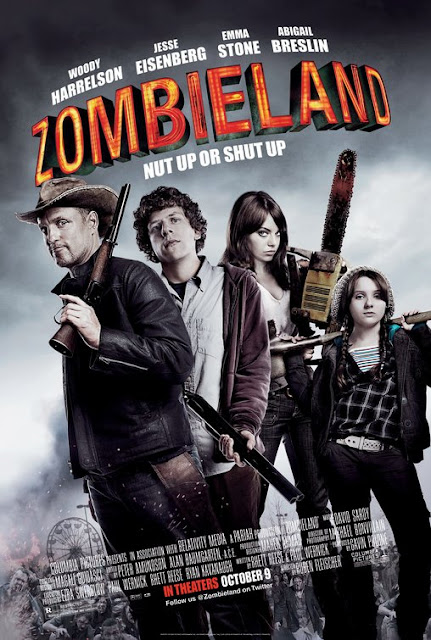 The two writers behind Zombieland are Rhett Reese and Paul Wernick, a pair of individuals who are most well-known today for writing both of the Deadpool movies. Watching Zombieland through the lens of it being a precursor to the pair's work on Deadpool, one begins to notice some similarities between the two projects. Most notably, both are extremely violent works containing a large amount of dark humor that inhabit well-trodden grounds of genre fiction (superhero movies and zombie movies) with lead characters who have varying degrees of self-awareness of the circumstances they're stuck in and provide narration to the audience on circumstances that are playing out on-screen. Like the two Deadpool movies, Zombieland is also funny, even moreso, in fact, than the pair of Deadpool movies Reese and Wernick would pen in the years to come.

Your usual zombie apocalypse has broken out and former shut-in Columbus (Jesse Eisenberg) is trying to do anything it takes to survive, to the point that he's made out an extensive list of tips for how to survive this scenario. Reese and Wernick's script is a lean piece of work (the film runs only 88 minutes with credits) that refuses to waste any time so it isn't long before Columbus runs into Tallahassee (Woody Harrelson), a hardened man who loves killing zombies any way he can. Columbus decides to tag along with the well-equipped Tallahassee as he tries to make his way back to his hometown, where he hopes to reunite with his parents, though the journey gets complicated once sisters Wichita (Emma Stone) and Little Rock (Abigail Breslin) enter the picture.

Though it takes place in a post-apocalyptic wasteland populated by gruesome zombies who wouldn't be out of place in a 28 Days Later follow-up, Zombieland is a movie thriving on taking advantage of all kinds of fun details offered up by its universe. Sometimes that takes the form of how Columbus's zombie survival tips get rendered in on-screen text or an extended scene where the four lead characters thoroughly trash an abandoned gift shop in slow-motion or especially a sequence that depicts those same protagonists deciding that, since they're passing through Hollywood, why not stay in one of the numerous luxurious mansions movie stars used to occupy?

It may be the end of the world, but that doesn't mean director Ruben Fleischer eschews any chance for this movie to, as Tallahassee once says, "enjoy the little things" which make up for some great comedy, much of which skilfully tends to flesh out the characters in the process of providing yuks (the best example of this is Little Rock explaining the mechanics of Hannah Montana to Tallahassee as Popular from Wicked blares in the background). All of these character-based gags end up adding up over time and help get one invested in these people by the time the climax rolls around. The surprising amount of emphasis placed on character arcs that Reese and Wernick brought to the Deadpool movies is also found here in Zombieland, which decides to make its core character arcs about how these individual characters who are all isolated and looking out for themselves end up uniting with one another.

On the other hand, in terms of characters, Reese and Wernick also bring over from their then-forthcoming Deadpool movies their sometimes troublesome way of writing female characters (Wichita and Little Rock get reduced to damsel-in-distress roles for the vast majority of the finale which feels like a massive waste) but at least Emma Stone manages to shine in her role (one of her last supporting gigs before 2010's Easy A launched her to leading lady status) despite the writing occasionally hampering her character. Meanwhile, Jesse Eisenberg, in his most high-profile leading role up to that point, makes for an engaging protagonist and does a great job of getting comedy out of Columbus's dorky tendencies without it feeling like the movie is just making a mockery of this character.

Woody Harrelson's is the absolute stand-out of the cast by far, though, Harrelson sells his characters assured warrior persona without a hitch and his sense of comedic timing, particularly in his humorous interactions with Columbus, is flat-out incredible. Let this be one of an infinite number of reminders on how Harrelson has such remarkable range as a performer, it's impossible to see his glib but caring teacher character from The Edge of Seventeen or chillingly merciless Colonel villain character in War for the Planet of the Apes in his riotous performance as Tallahassee in Zombieland, a performance that provides some of but far from all the laughs in this hysterical motion picture. I mean, how can you not love a movie that makes a pivotal character moment out of the prospect of Jesse Eisenberg fighting a zombie clown?
Posted by Douglas Laman (NerdInTheBasement) at 10:46 AM