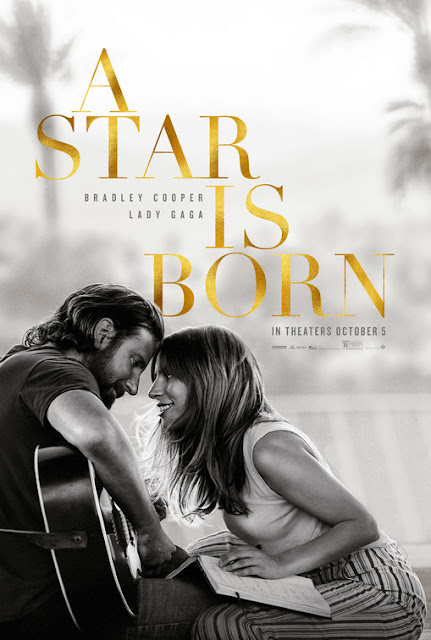 Living out here in a suburban town in Texas, I'm isolated from any and all big film festivals as well as all the major movies that premiere there so, naturally, that means I've been removed from all the hype surrounding A Star Is Born ever since it premiered a little over a month ago to rave reviews. I've been hearing non-stop about just how good this movie is, and yet, when I finally got to see this new motion picture over the past weekend, I was shocked to discover that not only did it exceed the massive amount of hype it had generated but just how surprising it's best qualities were. Even though it had been screened so many times before its proper domestic release date, there were still plenty of tricks up A Star Is Born's sleeve for us Texas yokels removed from the festival circuit!

The modern-day music scene is the backdrop for this version of this version of the well-trodden romantic drama, with country singer Jackson Maine (Bradley Cooper) fulfilling the male lead role in this incarnation of the project. Like all past leading men characters in A Star Is Born, Maine is a man dealing with alcoholism (this version also gives him an addiction to pills), with Maine specifically being a performer who just does his concerts in a daze as something to do in between drinking. After one of these concerts, he happens to stumble into a bar just looking for something to drink when, suddenly, one of the performing singers catches his eye. Her name is Ally (Lady Gaga) and he's immediately captivated by her.

After her performance, the two begin to talk and A Star Is Born takes an unexpected but highly welcome approach in depicting the first night that these two spend time together. Taking a cue from Richard Linklater's Before movies of all things, we follow Jackson and Ally around as they exchange dialogue in a realistic manner (they constantly stumble over the other's sentences, for instance) while walking around mundane environments, most notably a local supermarket. The Hollywood glitz and glamor of the original A Star Is Born from 1937 is traded in for a quieter and more intimate portrait of two people getting to know each other and it proves to be an utterly captivating way to introduce the viewer to our two lead characters.

These opening sequences set the table for the scrumptious cinematic meal A Star Is Born is serving in a number of ways but perhaps most notably introduced in these early scenes is the down-to-Earth nature of motion picture. Though at first used to make the interactions between Maine and Ally impressively realistic, A Star Is Born soon reveals that it'll primarily use this specific aesthetic to lend gravity to the turmoils the two characters are experiencing. This is especially true of the way it tackles Jackson Maine's struggles with addiction, there's a harrowing quality to the way A Star Is Born depicts Maine's lowest points because they're shown as realistically subdued pieces of self-destructive behavior (even the inevitable big award show snafu that crops up in each version of A Star Is Born is handled here with more restraint) rather than showy depictions of turmoil hand-crafted to be shown as clips during the presentation of the Best Actor category at the next Oscars.

Jackson Maine's story in A Star Is Born is that of a man struggling to allow himself to be vulnerable to the ones who love him and writer/director Bradley Cooper makes the great decision to let those aforementioned lowest moments or instances of him being emotionally open with another person (the latter of which can be beautifully seen in a moment of Maine recalling a childhood attempt at suicide) just linger on-screen in extended single takes that allow the pathos of these sequences to cover the audience like a thick blanket. If there's any major takeaway from Bradley Cooper's superb filmmaking on display here, it's that he's got a fascination for depicting people at their most humanely vulnerable moments and that fixation ends up informing perhaps the best scene of the entire film, the destined-to-be-iconic Shallows sequence.

If you've seen the trailer for A Star Is Born (if you've been to a movie theater in the last four months, I'm sure you've seen it, it's been attached to every movie!), then you know there's a scene where Ally gets up on-stage for the first time and sings a song with Jackson Maine, but my Lord, even knowing that it's coming, this sequence just takes on a whole new level of vivid life in the context of the motion picture itself when you've gotten to know the character of Ally in greater detail. Just watching those few moments where Ally debates going out there on the stage had my heart in my throat with her decision to walk out there in front of that crowd of people sending a wave of triumph through one's body that's only amplified by this moment being accompanied by a great piece of lighting courtesy of cinematographer Matthew Labitique (who does absolutely phenomenal work here).

Once she gets out on-stage, Ally doesn't suddenly turn into a superstar with confidence to spare. Even as she belts out the song with Lady Gaga's magnificent vocals, the camera lingers on her exhibiting obvious signs of nervousness, she covers her face, she fidgets, she acts like I or anyone else would in this situation. Lady Gaga gives an impressive performance throughout all of A Star Is Born, it's truly remarkable how much she sheds her own real-life media persona to become a wholly new character, but in this sequence, in particular, she excels as a performer in channeling the cosmos of emotions Ally experiences in this moment. The fact that the song she and Jackson are performing, Shallows, is an incredibly well-crafted piece of music.

That powerhouse sequence is easily the high point of A Star Is Born, but even after it's come and gone, the film, despite some subplots (like Ally's pivot towards pop music) that don't feel as fleshed out as they could be, rivets with its unpolished look at the complex and frequently grim turns the relationship between Maine and Ally takes, one that allows for actors Andrew Dice Clay (who knew he had this kind of convincing dramatic performance in him?) and especially a restrained yet emotionally devastating turn from Sam Elliot as the brother of Jackson Maine. Both Clay and Elliot, like Cooper and Gaga, soar in the emotionally raw confines that inform so many of the best moments in this excellent take on A Star Is Born, a movie so good that I don't even mind (that much) that Anthony Ramos A.K.A. John Laurens from the original production of Hamilton (who, here in A Star Is Born, plays Ally's best friend) somehow never got a chance to sing!
Posted by Douglas Laman (NerdInTheBasement) at 5:34 PM