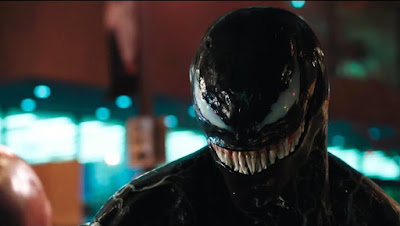 I was wrong. I was so very wrong. I was convinced that a Venom movie couldn't do well at the box office, that audiences just weren't gonna show up, but it turns out this character can indeed sustain his own feature at the domestic box office, can he ever! With a whopping $80 million opening weekend, Venom scored the biggest October opening weekend of all-time, easily shattering the $55 million bow of Gravity in the process. That's also the seventh biggest opening weekend ever for Sony/Columbia and marks only the seventh movie ever for the studio to open to over $80 million (six of those seven features are based on Marvel Comics characters) and, on top of all that, it's the seventh biggest opening weekend of 2018.


I knew Venom was popular but I never knew just how widespread the love for this character was. Sony/Columbia decided to play towards that fanbase by making sure this Venom movie could come off like 2016's Deadpool movie, a comic-accurate apology of sorts for a previously botched version of the character. The fact that the Venom marketing leaned heavier into darker horror-tinged elements than typical superhero fare also helped it stand out from the crowd while Tom Hardy's reputation as a beloved Academy Award-nominated actor (plus the participation of Michelle Williams and Riz Ahmed) likely gave an air of prestige to the proceedings. With no other PG-13 action blockbusters arriving until 2 Fantastic 2 Beasts on November 16th, Venom has the marketplace to itself for a little while, maybe it'll even crack $200 million domestically. Look out world, Sony's Marvel Comics Universe is officially a-go, won't be long now before Jared Leto's Morbius and Tom Hardy's Venom are scarfing down frozen tater tots together...

Venom wasn't the only new release to excel this weekend. Bradley Cooper's directorial debut A Star Is Born grossed $41.2 million over the weekend, the second-biggest opening weekend (only behind the $42 million bow of High School Musical 3: Senior Year) for a musical that isn't the 2017 version of Beauty and the Beast in history. That's the eighth biggest opening weekend ever for Bradley Cooper and the ninth biggest October opening weekend ever. No surprise this one had such a strong bow given the excellent marketing campaign Warner Bros. put together for the film and the massive amount of hype surrounding it. It shall be interesting to see if A Star Is Born holds like recent early October hits like Gone Girl or The Martian, if it does, it could manage to cross $150 million domestically.

In its second weekend of release, Smallfoot dipped 35%, a slightly better hold than the second-weekend decline of Storks, grossing another $14.9 million in the process and bringing its domestic total up to $42.7 million. Right behind it was last weekends top movie, Night School, which fell 55%  for a second-weekend gross of $12.2 million and a domestic total to date of $46.7 million. Fellow Universal holdover The House With A Clock In Its Walls grossed another $7.2 million this frame, a 42% drop from last weekend, for a $55 million domestic total to date. In its fourth weekend of release, A Simple Favor grossed another $3.4 million, a 47% drop from last weekend, for a domestic gross of $49 million.

The Nun dropped another 52% this weekend, allowing it to haunt up another $2.6 million for a $113.3 million domestic gross, putting it ahead of fellow horror holdover title Hellfest, which dropped 59% this weekend to add $2 million for a domestic total that only stands at $8.8 million. Crazy Rich Asians kept on going in its eighth weekend of release as it grossed another $2 million, a 49% decline from last weekend, bringing it up to a $169.1 million domestic total. Rounding out the top ten was The Predator, which plummeted a massive 76% for a $900,000 fourth weekend gross, bringing its domestic gross up to only $49.9 million.

Like with A Wrinkle In Time earlier this year, Disney wants to get Christopher Robin past the $100 million mark domestically and they did so by putting it back into 1,638 locations this weekend, which resulted in a disastrous $455,000 haul and an anemic per-theater average of only $278. With $98.1 million in the bank so far, the title needs $1.9 million more to get past that $100 million mark. The Old Man and The Gun continued its so-so run in limited release this weekend as the feature grossed $385,000 from 49 locations for a per-theater average of $7,857 and a domestic total so far of $575,455. Good news Beautifully Broken, you no longer have the worst wide-release opening weekend of 2018! That distinction now goes to Shine, which grossed a measly $218,789 from 609 locations for a per-theater average of $359. That's the second-worst opening weekend ever for a movie opening in wide release, only ahead of the $96,076 bow of the 2008 feature Proud American.

Next we have is The Sister Brothers, which grossed only $207,229 from 54 locations for a per-theater average of $3,838 and a domestic total of $693,727. Monsters And Men expanded into 143 locations this weekend and grossed only $177,705 for a per-theater average of only $1,243 and a domestic total of just $304,047. Finally, Loving Pablo finally debuted domestically in an odd release from Universal Pictures, who chose to bow it in 15 movie theaters while also debuting it on video-on-demand retailers, something the studio has rarely ever done. Such an unorthodox release for Universal didn't pay off as Loving Pablo only grossed $16,000 from 15 locations for a per-theater average of $1,067. That's the lowest recorded opening weekend ever for a Universal title according to Box Office Mojo.

The top 12 movies this weekend grossed a total of $167.9 million, the biggest weekend ever in October history and the first time in history that a top 12 weekend total in October has exceeded $150 million.
Posted by Douglas Laman (NerdInTheBasement) at 10:26 AM