Gemini Is Visually Engrossing But Less So On A Narrative Level 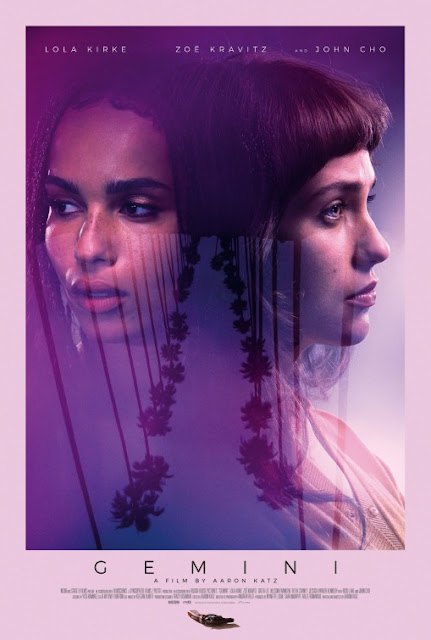 Gemini is one of those movies that's really darn good right up until it isn't. Let that not detract from its best qualities and it has quite a few, it's first two-thirds, maybe even first three-fourths, are a slickly produced homage to classic noir movies that has writer/director Aaron Katz putting his own modern spin on this well-worn staple of cinematic storytelling. Gemini is good at drumming up mystery and intrigue that it's a pity it can't stick the landing and manage to deliver a resolution that feels like a satisfying pay-off to all the build-up. But before we get to the finale, let's start at the very beginning (a very good place to start, or so I'm told!) and see what kind of story Gemini intends to tell.

Much of Gemini is an atmospheric exercise attempting to pay homage to classic noirs but taking the genre in new directions, but even amidst all the atmosphere, there's still a plot nestled in here like a prize stuffed inside a Cracker Jack box. Specifically, we get a plot revolving around Jill LeBeau (Lola Kirke) who works as an assistant to her best pal and noteworthy celebrity Heather Anderson (Zoe Kravitz). After a seemingly ordinary night of them hanging out together, LeBeau comes home from some errands to find Anderson murdered. Shaken from this turn of events, she soon learns that Detective Edward Ahn (John Cho) believes LeBeau is the one who actually committed these murders. Now on the run from the law, LeBeau is hunting down everyone Anderson had some kind of beef with in order to clear her name.

First and foremost, this mystery thriller looks spectacular on a visual level and it's impressive how cinematographer Andrew Reed mixes the visual aesthetic classic noirs with a uniquely modern sensibility that lends Gemini its own visual identity. Most notable in terms of new visual elements Gemini brings to the table is neon-tinted bright colors that inhabit so many of the exterior nighttime sequences. Many classic noirs were done in black-and-white and they tended to use their more restricted color palette beautifully. That being said, it's nonetheless interesting to see Gemini go in the opposite direction in terms of what colors it uses frequently and still manage to evoke a similar mood of ominous mystery as Humphery Bogart headlined-noirs that dominated movie theaters in the 1940's.

The camerawork captures all the bright lights of Hollywood in a haunting manner that smartly knows when to let shots linger on-screen so that the mood of individual scenes can stick with the audience. There are also some truly noteworthy intense sequences that are brought to life with particularly skillful camerawork, with a stand-out example of this being the intentionally claustrophobic camerawork used to depict a scene where Jill evesdrops on two potential suspects in Heather's murder in the closet of a hotel room. Keegan DeWitt's score also does a tremendous job of stoking a foreboding ambiance in the viewer and with all these elements working so wonderfully in tandem together to create a new kind of noir thriller, it's no wonder that Gemini is so dazzling on a visual level.

The characters of Gemini are less successful than the camerawork and score, but that doesn't mean there's no praise to be offered up in this department. Though I appreciate how much Jill LeBeau is an intentional departure from typical noir protagonists in a number of respects, most notably in how she is more realistically making things up as she goes along in her pursuit for the truth, I still wish she was a more fleshed-out character, especially since Lola Kirke's commendable performance keeps suggesting depth to the character that the script can't quite bring to the surface. Out of the cast, the one that leaves the biggest impression is John Cho, who beautifully makes the audience unsure of just how much his detective character really knows or doesn't know.

Clearly, this production is more successful on a visual level than a storytelling level and that becomes especially apparent in the aforementioned ending which eventually concludes things by just puttering out. The ending's especially odd in how it makes Gemini abruptly a character-focused piece when it's been primarily an atmospheric exercise up to that point, making the more underdeveloped nature of the character of Jill LeBeau all the more discernable. Aaron Katz tries to create a simultaneous homage and update to film noirs with Gemini and he finds some successful entertainment in trying to achieve that goal when it comes to this movies cinematography and score, but its ending and certain elements related to its lead character leave much to be desired.
Posted by Douglas Laman (NerdInTheBasement) at 11:49 AM