Beirut Is Mostly An Unremarkable Thriller 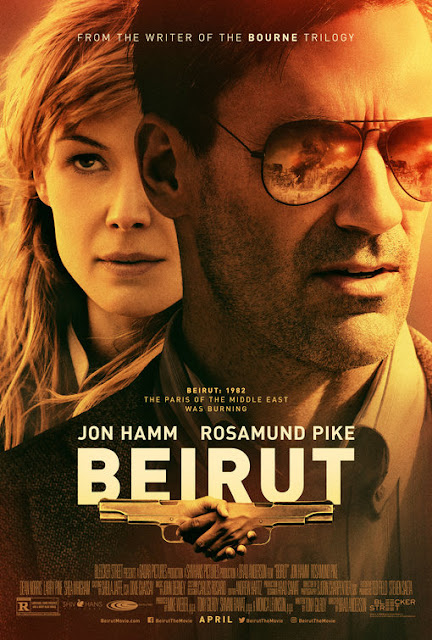 Jon Hamm's career choices in the last few years has made it clear he intends to become a full-time film actor now that Mad Men has come to a close. The movies he's starred in in either the last few seasons of Mad Men or right after that show ended have primarily been box office misfires thus far, though Baby Driver, in which he played a key supporting role, proved that Hamm appearing in a box office smash was not an impossible scenario. One of his most recent forays into cinematic leading man status was this Spring's period piece thriller Beirut, which came and went in its theatrical release with little fanfare (it's now streaming on Amazon Prime).

Hamm plays Mason Skiles, a former U.S. diplomat in Beirut who, after a traumatic experience in the region in 1972, has settled for a decade-long exile in the United States solving labor disputes. He's called back into action in Beirut under the pretenses of giving a speech at a college, but soon learns he's been hired for a far more dangerous assignment. Turns out, his former best friend Cal Riley (Mark Pellegrino), has been kidnapped and CIA and NSA officials, which include Sandy Crowder (Rosamund Pike), want Skiles help in getting Riley back. A reluctant Mason Skiles goes along with the mission, which will take him into the long-standing Israeli/Palestinian conflict and face-to-face with former allies turned enemies.

Competency is the word that comes to mind when I think of Beirut. This isn't a movie that's all that ambitious nor is it one that's bursting with creativity but it at least manages to mostly keep one's interest while it's transpiring. Much of this can be chalked up to the screenplay by Tony Gilroy, a man responsible for a number of similar thrillers like Michael Clayton and State of Play that feel like throwbacks to thrillers of the 1970's. This means a political thriller like this one is well-trodden territory for Gilroy and his comfort in this genre comes through in the best elements of the project, namely in how he gets tension making the constant level of uncertainty over who the lead characters can truly trust

At the same time, Tony Gilroy's writing has its fair share of flaws, including an uncomfortable tendency to treat native residents of Beirut as menacing caricatures rather than fully developed people as well as late-in-the-game reveals about which American individuals are actually corrupt that feel superfluous in the grand scheme of the plot and clunky in how they're executed during the movie. There's also an odd lack of personality in the various supporting characters, something which was certainly not a problem on prior Gilroy scripts like Michael Clayton, and that leaves talented performers like Rosamund Pike and Dean Norris with little to work with in their underwritten roles.

I do appreciate how Hamm's protagonist is at least written with interesting shades of grey and some nuanced elements, namely in how his alcoholism doesn't get magically resolved in the course of this story. Hamm is similarly game for handling complexities as evidenced by his solid lead performance that, when merged with the writing of his character, help carry the movie in some of its weakest spots. Hamm is working under the direction of Brad Anderson, who doesn't leave much of an impression in his work behind the camera here, for good or for ill, beyond showing a fondness for having his characters doused in blinding sunlight. Like much of Beirut, Brad Anderson's direction never really registers one way or another with the audience.
Posted by Douglas Laman (NerdInTheBasement) at 1:35 PM