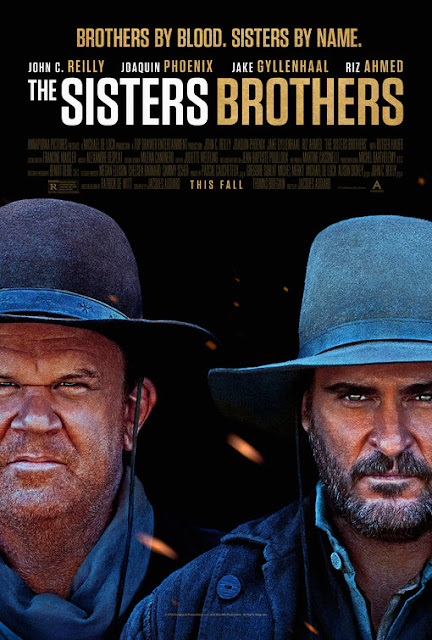 The rootin'-tootin' titular siblings of The Sisters Brothers are two men who have developed a reputation for being handy with a gun and getting whatever assignment you give them finished, albeit finished in an unconventional manner. These two men are Eli Sisters (John C. Reilly) and Charlie Sisters (Joaquin Phoenix), with the former member of the duo looking to find a way out of this life of being a gun-for-hire for bloodthirsty rich folks while Charlie Sisters see's no other life for himself and his brother than the one they're engaging in right now. Meanwhile, a pivotal subplot involves another duo, this time consisting of Southern dandy John Morris (Jake Gyllenhaal) and chemist Kermit Warm (Riz Ahmed), with Morris teaming up with Warm for a potentially lucrative prospecting gig after he was initially hired to hold Warm hostage for the Sisters Brothers.

As Eli and Charlie head off after John and Kermit, the two individual storylines quickly reveal that they're attempting to demonstrate two different ways of approaching life. Most notably, the John/Kermit storyline has a socialist bent to it as Kermit waxes poetically about his dream of building an idyllic socialist colony in Dallas, Texas (that got a good chuckle out of the audience I saw this movie with in my Plano, Texas located screening) while the two leave the past behind in their attempts to forge a new future. Meanwhile, the Sisters Brothers are working under the guise of the worst form of capitalism as they do dirty work for the wealthy at the expense of their well-being while they're also separated from the escapades of John and Kermit in that they're both consumed with the past in differing ways.

The Sisters Brothers is clearly looking to cover a lot of ground in the individual storylines and characters present in the screenplay penned by Jacques Audiard and Thomas Bidegain. The fact that I'm still thinking about this movies intricate contemplation of concepts like selfish behavior vs. selfless behavior and the grey areas where those two types of behavior overlap a few days after seeing it means the film has certainly done something right in the manner in which it explores these ideas. While watching it though, The Sisters Brothers has a tendency to slip from contemplative to aimless in a manner that doesn't feel intentional, it's inherently slow-paced nature occasionally results in moments that don't feel like chances for the somber tone to sink into the viewer, but rather instances where one wishes the movie would finally giddy on up.

The films uniquely unhurried vibe is specifically more troublesome in the John/Kermit storyline since the two characters never feel as richly developed as they could be. It's fun to see Jake Gyllenhaal and Riz Ahmed pull off a stealth Nightcrawler reunion, but the individual roles they're playing lack a specificity to make them truly engaging, particularly Southern Dandy John who has had a troubled childhood and not much else to his name, making extended sequences focusing exclusively on him more meandering than they should be. On the other hand, the aforementioned slower pace of things fits the storyline involving the two Sisters Brothers like a glove as we get the chance to see what a difficult day-to-day life these two lead characters endure.

Eli & Charlie resemble George & Lennie more than they do, say, The Lone Ranger & Tonto with Eli constantly having to look out for his disturbed brother and the both of them struggling to escape any of their assignments alive. This is a dynamic intentionally meant to undercut the grand mythos of classical Western protagonists and it's one of the best-realized elements of the entire movie, especially since the characters are brought to life by Joaquin Phoenix and John C. Reilly. Despite this being the third movie he's headlined this year, Phoenix never once echoes his other two 2018 performances in his turn as Charlie Sisters. Instead, he creates a wholly new creation that's manipulative, dangerous and also completely broken, a trio of character details Phoenix brings to life exceptionally well.

Accompanying him at all times is John C. Reilly, an actor whose versatility across more than two decades of cinema continues here with maybe the movies best overall performance. Unlike his brother, Charlie Sisters isn't too keen on the whole idea of bloodshed (though he can fire a gun when the situation calls for it) and this more soft-spoken but no less distinctively pronounced character is one that John C. Reilly excels in portraying, particularly in his moments of extreme vulnerability like a scene showing his character trying to engage in wistful roleplay with a sex worker at a saloon. That may sound like the set-up to some wacky scene from an Adam McKay Western comedy he'd headling with Will Ferrell, but in The Sisters Brothers, it's a prime opportunity for Reilly to show what's driving this man's weary but enduring spirit that the actors fully utilizes.

The two lead characters and the performances that bring them to life are probably the best elements of The Sisters Brothers, though a close second has to be the costume designs courtesy of silver screen legend Milena Canonero. Considering she's responsible for the costumes in films like A Clockwork Orange, Dick Tracy and The Grand Budapest Hotel, it's no wonder the Western garbs that the characters are wearing are so well-realized and visually memorable. I found myself more admiring The Sisters Brothers than being outright enamored with it, but its best elements like the aforementioned costumes and two lead performances are something special for sure.
Posted by Douglas Laman (NerdInTheBasement) at 9:50 AM