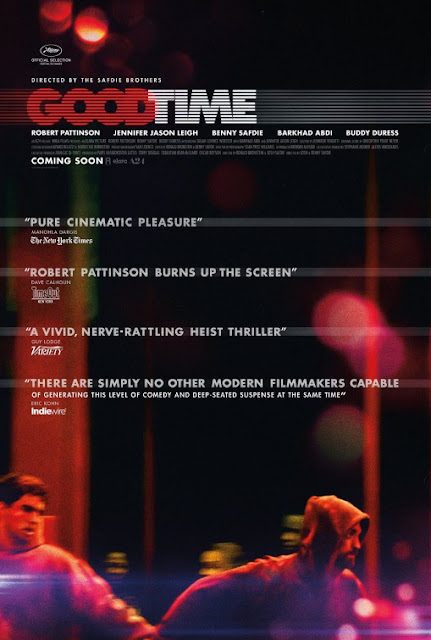 MILD SPOILERS FOR THE ENDING OF GOOD TIME ARE WITHIN!

Good Time feels so much like a singular movie, like it's the manifestation of a precise one-of-a-kind take on the crime thriller genre. Directed by Ben Safdie and Josh Safdie (the two are commonly referred to as The Safdie Brothers), there's plenty of elements here that are immediately distinctive, most notably the visual aesthetic that leans heavily on a bright neon-infused color scheme that coats every environment the story wanders into which range from a bail bond office to an amusement park. Then there's the score by Oneohtrix Point Never, which pulsates right in your ear with its idiosyncratic sound as well as the camerawork that comes up with truly inventive ways to frame various intensity-driven sequences.


All of those assorted unique traits are in service of a story, penned by Josh Safdie and Ronald Bronstein, revolving around two brothers, Connie Nikas (Robert Pattinson) and his brother Nick Nikas (Ben Safdie). Instead of getting an elongated prologue defining their past together, we start in media res with Connie "saving" his brother, who has an undefined mental handicap, from a visit from a psychiatrist (played by Peter Verby). We don't need an extensive look into the past to define these characters when the present will do just fine in terms of establishing what's going on between these two. From the start, we can see there is true brotherly affection here, Connie loves his brother...but how he's showing that love isn't good for Nick.

Connie is a man made up of reckless behavior, as seen in one of the opening scenes of the movie when he and his brother pull off a bank robbery that ends up going South. In the process of running away from the cops, Nick runs into a glass door, falls down unconscious and ends up in prison. Connie wants to get his brother out of the slammer and he needs ten thousand dollars to make bail. The hunt for that extra ten grand serves as the momentum for the rest of our plot and it serves as a brilliant piece of motivation for Connie and every action he commits for the remainder of the film. This right here is some elegantly simple storytelling in motion.

Once Connie goes off on his quest to procure all that money, he reveals himself to be not some master conman but rather this really normal human being who keeps trying to put on a show of being some crafty criminal. All of the various plans he puts together for his goal of securing all that money end up in failure and not the kind of failure you frequently see in these crime movies where one plan going up in smoke ends up leading to unintended positive consequences. Instead, all of the failures just keep piling up for Connie and sending him further and further down the corner he's backed into. You ever hear of a comedy of errors? Good Time is all about Connie being trapped in a crime thriller of errors and the errors are very much his own.

Robert Pattinson, whose quickly joined Kristen Stewart in revealing himself to be a heavily talented dramatic actor once those Twilight movies were done, is top-notch in the role of Connie. I love the way he's always morphing his own personality depending on who he's interacting with, there's a distinctly different way Pattinson composes himself around Jennifer Jason Leigh's entertaining character than there is when he's trying to wrangle information regarding the location an acid-laced Sprite bottle out of a fellow criminal on the lam. That aspect of his performance makes a climactic scene where it's just Connie all by his lonesome as the consequences of his actions are finally dawning on him all the more powerful since it may be the only scene in the entire motion picture where we get a glimpse into the mind of this guy whose always playing some kind of long con with anyone who comes into contact with him.

Pattinson's magnetic lead performance is routinely accompanied by some startling visuals. As said at the outset of this review, there's a dazzling approach to bright neon colors in this nighttime set movie that allow countless shots to pop right off the screen. Cinematographer Sean Price Williams is obviously relishing the unique visual opportunities afforded by this story, there's so much memorable imagery created out of unique lighting choices even in daytime sequences. Even better, the movie knows when to dial back on this neon-lighting choice for a handful of more emotionally intimate sequences like the opening  and closing scenes that are all about Nick and his own internal problems. In other words, the intricately crafted story is dictating the distinct visual aesthetic choices here, not the other way around.

Oh, and since I mentioned them real briefly a moment ago, it needs to be said that the opening and closing scenes of this movie are absolutely brilliant. That final scene of Good Time is a marvel in how it recontextualizes the entire movie and slowly reveals the interior perspective of Nick, all set to a haunting Iggy Pop song. A transfixing crime thriller all about watching a selfish man (portrayed through a brilliant Robert Pattinson performance) collapse culminates in a sequence depicting a twinge of hope that maybe Nick can have his own future. This scene's as beautiful on an emotional level as numerous gripping sequences in Good Time are on a visual level, and considering how visually sensational this feature is, that's truly an accomplishment.
Posted by Douglas Laman (NerdInTheBasement) at 1:27 PM