Water You Waiting For? Go See The Thoughtful And Engrossing Romantic Monster Movie Drama The Shape of Water 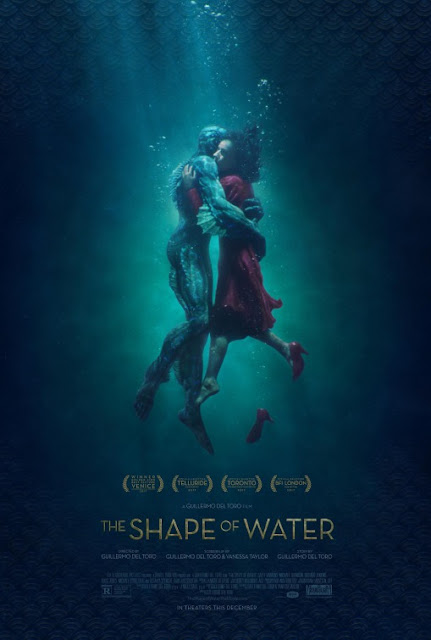 Fairy tales have always been used to impart larger ideas regarding the societies they originated in within the confines of something palatable to the general public and Guillermo Del Toro, a fellow whose filmography clearly indicates a love for fairy tales, has used his movies that are heavily informed by fairy tales of old as ways to explore all kinds of weighty ideas or societally relevant concepts. The Devil's Backbone is ostensibly a ghost story but it's also a tale of how people show off their true selves in times of war while his project most explicitly evocative of fairy tales, Pan's Labyrinth, is set in the real world conflict of the Spanish Civil War. Even his movies about robot and monsters punching each other takes time to demonstrate how walls dividing countries only create more problems, a concept that's become all the more relevant as the years go by.

For the newest and perhaps best overall movie from this director yet, The Shape of Water, Guillermo Del Toro and Vanessa Taylor have penned a screenplay that feels very much like it's like a traditional fairy tale while fully taking advantage of it's American 1960's setting and all the political overtones that are inherently baked into such an era. Our lead character for this piece is Elisa Esposito (Sally Hawkins), a mute woman going through the motions in a mostly humdrum life that works, along with her best friend Zelda Fuller (Octavia Spencer), at a government research facility that's just taken in a strange new creature, a kind of blue-colored sea monster, referred to in the credits as Amphibian Man (played by Doug Jones), from the Amazon jungle.

The creature is being held in a single room by the cruel Colonel Richard Strickland (Michael Shannon), who violently abuses Amphibian Man daily. Elisa and Zelda are tasked with cleaning up the beast's room daily in a quick order but after the two engage in some brief chance encounters, Elisa begins to form a bond with Amphibian Man. What you have heard and seen in the trailers and other promotional materials for this film is 110% the truth, The Shape of Water is unabashedly a fish-monster/woman love story, the kind of concept that sounds like a joke but is brought to heartwarming and engrossing life here as Elisa's bond with Amphibian Man grows more and more intimate over the course of this beautiful story.

As I've said many times before, any story, no matter how seemingly ridiculous or preposterous, can work, it all comes down to the execution of such a story that makes all the difference. Del Toro and Taylor have decided to make the brilliant decision to make The Shape of Water a classical tale, one that treats its fishy lead character with an immense amount of love and zero cynicism. I knew this approach was both in full swing and a good idea early on in the story when the Amphibian Man is simply introduced into the story as a newcomer to the research facility, we don't get extensive monologues explaining how he works, where he came from or any other extraneous background details like that, only some offhand lines of dialogue shed the tiniest bit of light about what this creature was like before he was whisked away to his containment.

Why should we get such information? That's irrelevant to the story at hand, which is instead about Elisa and the relationship she forms with a fish-man in a tank. Even better is that this frequently stripped-down narrative doesn't come at the cost of exploring social issues of the era that reverberate in today's society, on the contrary, the movie heavily orients its plot around how women, people of color and the LGBTQA+ community were treated in this decade. The Shape of Water knows when to keeps things streamlined, but it also knows how to explore real-world problems of the 60's (which still register as problems today, tragically) in an insightful fashion. While speaking of the storytelling of The Shape of Water, it should be noted that another one of its best facets is how it treats the central romance between the two leads with complete sincerity and it works like gangbusters,. We're given such insight into Elisa as a character that one can completely buy why she falls for this Amphibian Man while a gradual escalation to the romantic affection shown between the two individuals allows their romance to feel organic & natural. There's a compelling sweetness here that's vividly captivating, I found myself getting thoroughly swept up in these two societal misfits finding solace in each other's love.

Maybe, among other reasons, such a romance works is because of how Elisa, as well as the other characters in this story, feels so vivid and alive. Our lead character, Elisa, is herself an especially fascinating character who reveals herself to be that tragically elusive figure in fictional storytelling who isn't solely defined by her disability (in her case, being mute) while also being thoroughly insightful on how it is to live with such a disability on a day-to-day basis. Being someone on the Autism spectrum myself whose struggled with social interactions with other people on a regular basis, I can handily say I've rarely seen a film depict the process of struggling to communicate emotions in ways that come naturally to everyone else so poignantly and accurately.

Just as The Shape of Water has a palpable affection for its romantic storyline, it also has a love for Elisa, and the other societal outcasts in her life (including co-worker Zelda and her closeted neighbor Giles, the latter of whom is played by Richard Jenkins). That's why we get those recurring beautifully subdued scenes that just show Elisa on a bus ride as she lets emotions, sometimes good, sometimes bad, wash over her, this story doesn't want to just rush past what she's going through key moments of reflection for this lead character it loves so much. Instead, it wants to let her feelings in these introspective moments wash over the audience, which creates a powerful effect thanks to a combination of those well-realized characters as well as gorgeous visuals and some excellent music cues coalescing into something thoroughly engrossing. It's in these scenes that the mere sight of two raindrops cascading a bus window before colliding takes on a massively heart-rending meaning that's found in spades in this movie.

Of course, Elisa wouldn't be anywhere without Sally Hawkins performing her since the actor does impressive work portraying this character. Hawkins, a pro at using body language in subtle ways (just look at her work in her other 2017 drama Maudie), uses that skill to make her frequent use of ASL (American Sign Language) look and feel so natural while her facial expressions are also terrific, she's just working wonders in handling a character that relies solely on verbal communication. Playing off her for a good chunk of the movie is Richard Jenkens as her neighbor Giles and Jenkins is just charming with a capital C in his role, the guy gets some of the most hilarious moments in the entirety of the film. Doug Jones also deserves major praise for his performance as Amphibian Man, this guy, whose working underneath outstanding makeup and prosthetics, is remarkable in his movements, the tiniest twitch of his head emerges with a clear level of thought put into it. Meanwhile, Octavia Spencer, Michael Stuhlbarg, and Michael Shannon also deliver strong work in pivotal supporting roles in a story that ensures their individual characters get plenty of room to breathe and become actual human beings.

It's nice how it isn't just this collection of actors that fall in line with the unique atmosphere conveyed by the writing and directing of The Shape of Water, the whole rest of the cast & crew just seem to be in sync on what kind of idiosyncratic film they're working on here. Cinematographer Dan Lausten, who has worked with Guillermo Del Toro multiple times in the past, is especially adept at creating some luscious visuals that would feel right at home as illustrations in any classic fairy tale, while on the music side of things, both Alexandre Desplat's score and the licensed songs scattered throughout the runtime are excellent at cementing the intoxicating romantic vibe of the entire production. The Shape of Water is a top-caliber affair that is like the best fairy tales it's so clearly and cleverly emulating in that we'll all still be talking about it for years to come.
Posted by Douglas Laman (NerdInTheBasement) at 1:21 PM