Three Billboards Outside of Ebbing, Missouri Pokes And Prodes The Audience With Realistic But Occasionally Shallow Vulgarity 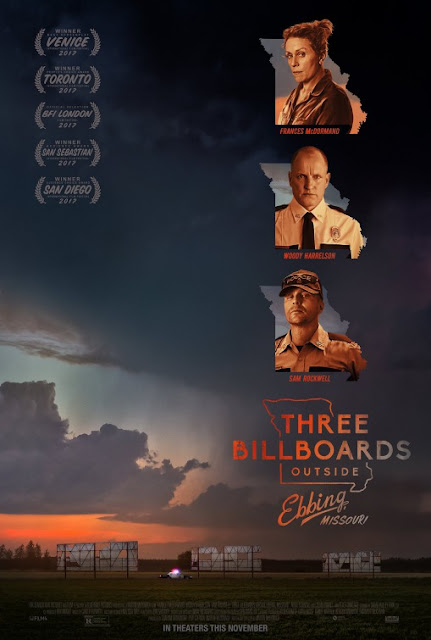 Expectations are a funny thing. I walked into Three Billboards Outside of Ebbing, Missouri certain I knew just what kind of film I was about to watch and walked out of my screening having just witnessed a feature that played against my expectations in many respects. The premise of this new Martin McDonagh motion picture had me expecting a film that was rife with relevant social commentary and instead the final project itself starts out by positioning itself as something akin to that before transitioning into a story that's more about dealing with general themes of loss and grappling with said loss.

Eschewing the chance to offer up insight into sociopolitical affairs wasn't what I expected out of Three Billboards Outside of Ebbing, Missouri, but the film itself skips past my expectations to deliver something that's still really good in its own right. The Three Billboards of the title have been commissioned by Mildred Hayes (Frances McDormand), who has plastered a trio of long-abandoned billboards with text calling out the local police force and specifically sheriff Bill Willoughby (Woody Harrelson) for failing to bring the individual responsible for killing Mildred's daughter to justice. In a development that mimics reality, the person shedding light on all too real problems in a long-standing system garners more controversy than the actual problem since that person in question is trying to upset the status quo.

Those three billboards begin all kinds of chaos in Ebbing, Missouri, especially for police officer Jason Dixon (Sam Rockwell), who is no fan of having the department he works for being called out for negligence. What seems to be setting up a "little guy" (Mildred Hayes) vs. "big establishment" (the local police department) story soon turns into a more nuanced tale that resembles Steven Spielberg's 2005 feature Munich of all things in that Three Billboards Outside of Ebbing, Missouri ends up conveying empathy for people going through tragedy but also ponders the  long-term costs of giving into violent vengeance as a response to that tragedy.

That surprising gradual reveal of what Three Billboards is actually about is one of the best facets of its screenplay, penned by Martin McDonagh, which is peppered with plenty of memorably profane dialogue for Frances McDormand to chew on as well as a number of subtle details that make its depiction of Ebbing, Missouri feel like an all too real town. Most notably, the way characters in the story, including Mildred Hayes herself, frequently use racial and ableist slurs in a casual manner is a bold choice, but it's one that seems to emerge via McDonagh wanting to show how prejudice predominately crops up in the modern day world not via Klansman riding on horseback but rather through creepily relaxed usages of racist or insulting slurs that have become ingrained in the local vernacular.

That element of the movie probably would be more impactful if there were any prominent people of color in the story to help balance out the large number of white folks in the movie saying discriminatory stuff, but it's still an interesting angle that references the oft all too ignored concept of modern-day racism in an appropriately subdued manner. That's about it for Three Billboards confronting real-world politics though as the rest of the project is situated on broader themes like coming to terms with grief. Not confronting real-world issues does mean there are spots of Three Billboards that feel like they could have had a greater impact if they were more cognizant of the outside world but thankfully McDonagh has enabled the characters within the film to get richer and more complex they go along and that adds its own kind of depth to the proceedings.

The characters themselves are brought to life by a fine troop of actors, most notably Frances McDormand in a lead role that allows her to run off as many synonyms for various pieces of profanity as you can think of. She's so good at playing a tough-as-nails no-BS individual that instances of her character showing signs of vulnerability land with a true emotional wallop and a lot of that comes from McDormand's character. Also worth commending is Sam Rockwell, a long-time noteworthy character actor who gets a major role to play in this tale as a bigoted cop who gets heavily transformed (for better and for worse) in the course of this story and it's a character he knocks it out of the park.

McDormand and Rockwell, as well as supporting players like Woody Harrelson and John Hawkes (man, why don't we see John Hawkes in more movies, that guy was aces in The Sessions) seem to be able to channel themselves nicely into Martin McDonagh's unflinching and sometimes absurd vision of the world and that kind of creative synergy is interesting to see because even McDonagh's own script sometimes has trouble grappling between its more thoughtful tendencies and its tendency for heightened humor. That plus its trouble with grappling with the more complex reality of some of the ideas its story hints at do hinder Three Billboards, but this is still a really good movie, particularly in its performances, that deserves a look-see.
Posted by Douglas Laman (NerdInTheBasement) at 12:13 PM