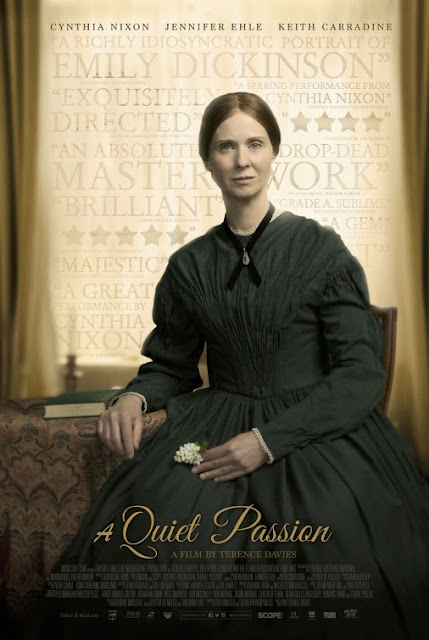 Though I'd heard some positive buzz floating around for it over the last year, A Quiet Passion had flown right under my radar during its theatrical release. Luckily, I managed to catch up on it a few days back and very early on in this movie's runtime, a sequence occurs that managed to convince me that I was about to watch something special. The scene in question depicts Edward Dickinson (Keith Carradine) and his three children, one of whom was famous poet Emily Dickinson, pose for a photograph. The camera positions each of these four people in the middle of the shot and stands back a ways before slowly pulling in. As the camera gets closer and closer to Edward and his siblings, their faces begin to morph into older versions of themselves, with the offspring of Edward Dickinson gradually transforming from children to adults, all of it occurring in a single uninterrupted shot.


The rest of the movie follows Emily Dickinson (Cynthia Nixon) over her adulthood years. While her various pieces of writing get published, Dickinson is not shown to be some sort of figure whose writing plays into some greater divine purpose, rather we follow Emily as she carries out a solitary existence in her families home. Her deteriorating health, along with displaying symptoms that modern individuals believe indicate Emily Dickinson suffered from the anxiety disorder Agoraphobia, meant that a poet whose works would eventually reach a worldwide audience long after she had passed away was happy to spend her days isolated from the rest of the world in her own room, refusing to even do so much as greet guests who entered her families home.


The secluded existence of Emily Dickinson is kept intact by writer/director Terence Davies decision to keep the entirety of the story, save for an opening scene depicting young Emily Dickinson at a heavily religious academy, confined to just the Dickinson home. Major external historical events like the Civil War are talked about, but their visual representation are limited to just on-screen photographs. Why should we see such carnage? Dickinson certainly won't, her experience with such a large-scale conflict will be just through those aforementioned photographs. Here we have a clear example of how Terence Davies is subtly ensuring that the audiences perspective here and Emily Dickson's perspective on this world are one and the same and that tactic most certainly doesn't stop there.

Keeping the entire story contained to one environment with a limited cast (Jennifer Ehle and Duncan Deff, as Emily's siblings Vinnie and Austin Dickinson, respectively, are the most prominent supporting players) means there's a large emphasis on dialogue here, a fitting move considering Dickinson's love for the written word. Davies creates some thoroughly memorable dialogue here that takes advantage of the unique vernacular of themed-19th century to create lines that at first are predominately humorous and demonstrates Dickinson's wry and nonconformist personality. Then we move to a more somber third act that frequently eschews dialogue altogether and just lets haunting visuals do all the talking.

Cynthia Nixon, playing the lead role of Emily Dickinson, seems to be thoroughly savoring the lead role here and has a notable knack for having natural and assured deliveries of the olden-style vocabulary her character constantly delivers. Nixon's a real wonder in her take on Emily Dickinson, she's excellent at playing the characters younger more exuberant personality that refuses to just accept the unjust ways of society. The way Nixon plays her character talking back to figures of authority just makes you want to clap and cheer, she makes Emily Dickinson a figure that seems like she could move mountains in a heartbeat for what she believes in.

But of course, Dickinson becomes more and more restrained as the years go on and she shuts herself out from the world (though the character retains her quick wit as demonstrated by her engaging in an argument with a would-be suitor) and Nixon brings a similar level of quality to this area of her performance. Both the confident and the vulnerable sides of Emily Dickinson feel thoroughly alive in Cynthia Nixon's hands and Jennifer Ehle unearths similar success in depicting Dickinson's sister. Ehle's depiction of a person trying to help their sibling with some form of a mental-based issue or disorder is quietly realistic and makes a pivotal emotional moment between Emily and her sister impossible to watch without getting a lump in your throat.

This is such a beautifully well-realized relationship between sisters that manages to work so well and really becomes the soul of the movie in many ways. It's by no means the only area A Quiet Passion excels in and many of those positive qualities stem from Terence Davies ability as a director to handle executing certain moments or scenes with a quietly devastating quality. The multitude of death scenes in the film are perfect examples of this, no orchestral score accompanies these tragic scenes, we just see human anguish transpire before our very eyes in a realistic manner devoid of stylized tendencies. While maintaining a small-scale nature to this story was basically required the moment it was decided to make said story all about Emily Dickinson's reclusive adulthood, it's especially a smart choice for A Quiet Passion to go down this route since it results in those kind of emotionally engrossing sequences that help make this such a fascinating and terrific motion picture.
Posted by Douglas Laman (NerdInTheBasement) at 3:20 PM