The Man Who Invented Christmas Is Fine-ish Festive Fare 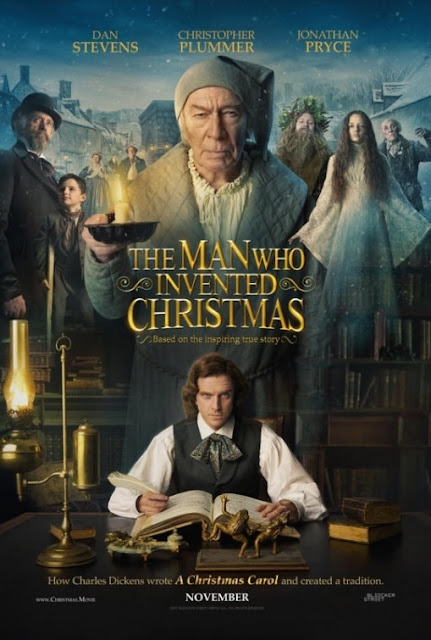 That first trailer for The Man Who Invented Christmas invited a good amount of mocking scorn when it was first released and really, can you blame anyone? Just watch this thing, it seems like a parody of what a prospective biopic drama of Charles Dickens would be like:

Simply put, it's not a great trailer. But trailers can be heavily decieving and while various elements of the trailer like the cutesy origin stories for various parts of A Christmas Carol are intact in the actual film itself, it turns out that The Man Who Invented Christmas is mostly (GASP!) diverting yuletide fare. It mostly achieves this by fully committing to being a conventional family Christmas movie, the kind youngsters can watch, instead of an introspective drama about Charles Dickens. No reason those two concepts couldn't be the same movie, but as far as modern-day live-action family movies go, I've seen way worse than this.

The stories more concentrated narrative is also helpful in making the film better than expected, as it foregoes being one of those biopics that follows the entire life of a real life individuals and instead simply focuses on Dickens and his attempt to write A Christmas Carol over a multi-week span of time. Charles Dickens (Dan Stevens) is writing this book in response to his recent pieces of literature that have failed to sell well. Needing money in a hurry, he promises to put together a book about a grouchy old miser visited by some helpful spirits super duper quickly. In order to pen such a novel tohugh, he'll have to confront his own past as well as his damaged relationship with his father, John Dickens (Johnathan Pryce).

All the while, Dickens is pestered by the characters from the book he keeps tyring to write depsite constant family drama and that includes Ebenezer Scrooge (Christopher Plummer) himself. Writer Susan Coyne pens the entire story in broad strokes that mean there's really no chance for fully formed characters to emerge from Charles Dickens and his real-life family members while the story itself has a tendency to lose track of its own subplots, most notably one involving Dicken's best pal John Forster (Justin Edwards) and his attempts to marry a girl despite that gir'sl father disapproving of the marriage. After that situation is introduced midway through the film, it's never mentioned again until the ending when it's revealed that the whole thing just resolved itself off-screen.

Luckily, there is a sincere spirit to the story that means it's fully committed to spreading some holly jolly cheer, lessons about appreciating your family and other morals that may be tidy but at least Coyne knows how to make execute such ideas in a way that makes them feel warm & cozy instead of treacley. Making this one heavily geared towards kids also means the film has a shorter runtime (credits roll before the 100 minute mark arrives) and that means things do move on at a reasonable clip. Unfortunately, those attempts to include real-world inspirations for pieces of Dickens writing that are seen in the trailer still don't work in the actual film, especially an encounter Dickens has with a law enforcement officer named "Mr. Copperfield" in one of the movies final scenes, which just made me want to put my face in the palm of my hand.

The cast appears to be aware of the kind of safe but amusing project they're in and still give it a go, which is another nice surprise from the production. Dan Stevens, capping off quite the 2017 for him, is going through the motions in a typical ecccentic genius role, but at least he's reaosnably fun as Charles Dickens while Christopher Plummer is perfectly cast as Scrooge. In her first feature film role, Anna Murphy puts in solid work as the Irish servant of Charles Dickens, Tara, while Morfydd Clark is stuck in the thankless role of "The Wife" that too many women find themselves playing in these male-led biopics.

I know I'm coming off as pretty cynical about The Man Who Invented Christmas, and it's hard not to be about a movie that has Charles Dickens get a sense of inspiration upon meeting a decriped elderly waiter named "Marley", but I'd say as a whole its pleasant enough, though not all that memorable, stuff that'' probably work fine as a way to pass the time when it inevitably airs in regular rotation on Freeform's 25 Days of Christmas. This one is better than expected overall than that dreadful trailer would suggest, though I do hope someone one day mines the life of Charles Dickens for more of a page-turner of a movie.
Posted by Douglas Laman (NerdInTheBasement) at 2:20 PM