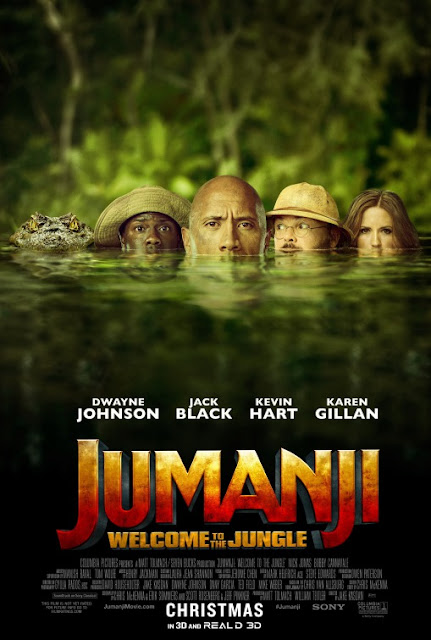 I'm not sure a Jumanji sequel (yes, this new Jumanji adventure is a follow-up, not a remake or reboot, to that 1995 family film that I haven't seen) was exactly necessary, but it's here as part of Sony/Columbia's ongoing attempt to exploit any potential franchise from their library of movies, and luckily, it's one of the better results to emerge from this initiative. It's not really memorable or all that inventive but it passes the time nicely and the actors in the lead roles are utilized quite well. Never would have thought the best aspect of a 2017 Jumanji follow-up would be the way it allows actors to really excel and show off their talents, but here we are!

In order to get to the fun comedic performances of Jumanji: Welcome To The Jungle though, you have to get through introductory sequences setting up a quartet of High Schoolers, paranoid nerd Spencer (Alex Wolff), football superstar "Fridge" Johnson (Ser'Darius Blain), Bethany Walker (Madison Iseman), whose obsessed with herself and her image, and the reclusive Martha (Morgan Turner). These portions of Jumani play like an after-school special, complete with the broad unimaginative personalities that populate such entities, as we get to see the interpersonal conflicts develop between the four of them as well as what kind of individual personalities and flaws they're grappling with.

Finally, that elusive Jumanji game, here appearing as a video game that the four of them stumble on during detention, shows up and sucks the four of them into the world of Jumanji, where they each turn into video game characters that directly conflict with their real-life personalities. Spencer is now Dr. Smolder Bravestone (Dwayne Johnson), an Indiana Jones/Nathan Drake archeological hero, Fridge is now the diminuitive zoology expert "Mouse" Finbar (Kevin Hart), Martha is now a Lara Croft-esque figure known as Ruby Roundhouse (Karne Gillan) and Bethany has been turned into the middle-aged male professor Sheldon Oberon (Jack Black).

None of them are comfortable in their new forms but they're gonna have to embrace them and work together if they wanna complete the game and return home. A simple plot emerges from there, but that's actually one of the better assets of the screenplay (credited to a whopping five writers), there's, thankfully, no compulsion to constantly introduce forced twists just to make things needlessly convoluted, it's just a straightforward adventure story that doesn't feel the need to make the standards settings or mechanics of an old-timey jungle adventure "hip" or "edgy" just because it's 2017. Plus, keeping the story relatively simple allows for the best part of the movie to really have time to shine and that best part turns out to be the four actors chosen to play the in-game versions of the four lead characters.

Dwayne Johnson seems to really excel at playing awkward geeky guys in a way that comes off as humorous without ever teetering over into mocking, so he's of course a ball playing Spencer. Karne Gillan spends too much of the first half of the movie playing the "Mom" of the group (which way too often happens with the lone female characters in these ensemble blockbuster movies) but thankfully, she gets a super funny sequence in the middle of the story that allows her to use that same command of body language and posture that made Nebula's walk so memorable for the purpose of garnering big laughs. Jack Black, meanwhile gets to turn a character that could have been an easy punching bag at the expense of mocking thinly sketched teenage girl stereotypes into something a lot more humorous than that thanks to his full commitment to the role as well as the scripts overall desire to treat its High School characters as characters instead of punching bags.

Like Johnson and his ability to not seem like he's making fun of High School dorks, the writing and performance of Black's character is more interested in watching Bethany grow as a character than anything else. A pivotal scene showing Bethany-as-Sheldon giving CPR to a fatally wounded male character might have been used as fodder for a tired "gay panic" joke in a lesser comedy, but here is used as a sincere demonstration of her growing into a more selfless person. That's nice to see, though not all the lead characters get that kind of depth, as seen by how Kevin Hart's the only one of the four who doesn't get much to do (I can't even really describe what, if any, character arc he goes through). He still gets a handful of funny moments while Nick Jonas, of all people, turns out to be a natural and likable actor and Bobby Cannavale gets to portray an enjoyable over-the-top in-video-game baddie whose got centipedes crawling out of his ears.

There's a bunch of Jumanji: Welcome To The Jungle, whether it's in the unremarkable sets, Henry Jackman's generic score  or the awkward pacing, that's pretty middling, but its ability to actually become more character-centric once it gets into the video game and actually properly utilize the talented actors at its disposal does make it much more pleasant to watch than expected. Execution is key to make family fare, which typically revolve around predictable or well-worn storytelling mechanisms, work and director Jake Kasdan and the cast & crew under his watch have actually put together a better than expected project that does know how to execute things in a diverting fashion. One request though; if we go back to the world of Jumanji, can we get some baby elephants and/or baby hippo's next time? It's a crime that this movie spends so much time in the jungle but never once has the camera focusing on such adorable critters! 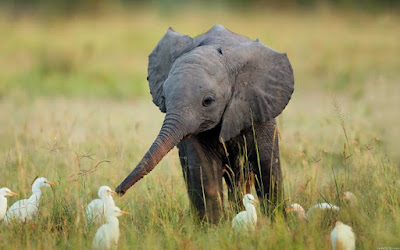 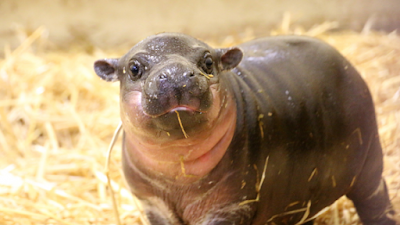