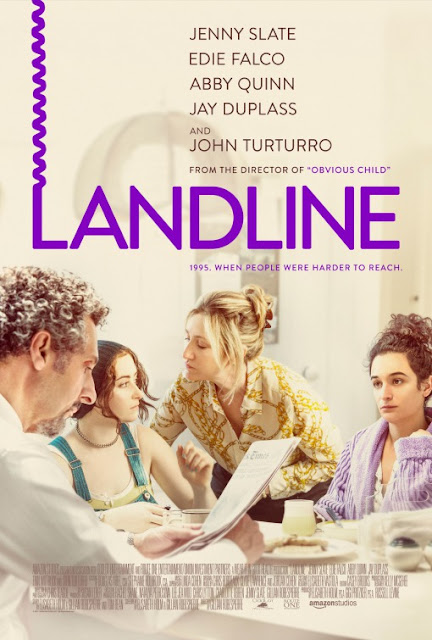 Back in the bygone year of 1995, the Jacobs family is undergoing tons of familiar strife from all of its individual members. There's wife-to-be Dana Jacobs (Jenny Slate) whose impending marriage is giving her plenty of anxiety and leading her to cheat on her husband while her younger sister Ali Jacobs (Abby Quinn) is a rebellious 18-year-old who has turned to drugs and shirking school. These sisters have entirely different personalities, with Dana being more anxious while Jacobs is a foul-mouthed whirlwind of rebellion, but they're both trying to put on an exterior built on a facade to conceal their internal woes and that helps them connect even in the most turbulent of times.

Dana and Ali soon learn they're not the only member of their family to be concealing some pivotal secrets though as it turns out their dad, Alan Jacobs (John Turturro), is cheating on their mom, Pat Jacobs (Edie Falco). Who is this mysterious woman he keeps sending lewd romantic messages to? They're determined to find out while coming to terms with just how much of the families currently fraught dynamic emerges from an inability to be in touch with reality. The characters of Landline resist the gravitational pull of reality and all the responsibilities it entails like a cat being placed into a bucket of bathwater!

Though each of the four members of the Jacobs family are explored in the course of the story, Landline is mostly a two-hander tale of sisterhood between Dana and Ali, a relationship which serves the film well both in terms of creating humor and also concocting interesting human drama. Much of this comes down to Jenny Slate, an actor reuniting with writer/director Gillian Robespierre after the two worked together on the acclaimed 2014 project Obvious Child. Having not seen that feature, I cannot comment on how Landline stacks up to their previous collaboration but I can say here that the writing by Robespierre and Elisabeth Holm and the performance by Jenny Slate work quite well together.

Jenny Slate as an actor frequently channels that endearing & relatably dorky vibe that the last decade of cinema has seen comedic actors like Michael Cera & Jay Baruchel inhabit. Slate portrays that specific persona with winning conviction, a scene of her character constantly saying the wrong thing or being awkward while on a big date in an unusual location (her exclamation of "It's on fire!" when being handed a lit cigarette to smoke is wonderful) really pops from a humor perspective because of Slate's performance. Moments where Dana is supposed to come off as remorseful or vulnerable also manage to show off Slate's acting chops, she really gives a great lead performance here.

The sense of realism embedded into both Slate's performance and the writing of her character can't help but reinforce how Ali seems to get the short shrift in terms of depth. Now, Abby Quinn is fun in the part for sure and she has strong chemistry with Jenny Slate, but the character as written feels like a hodgepodge of too many stereotypical troubled teen storylines. There's a way to breathe life into cliches and evoke to the viewer the realities that inspired such long-standing tropes, but Landline just can't quite get there, especially since the wrap-up for Ali's storyline feels much too tidy considering the darker drug-infested terrain the character is already so well-versed in.

There are other elements during the closing scenes of Landline that feel similarly too immaculate considering how many of the best moments of the rest of the movie derive themselves from realistic depictions of flawed human behavior. Still, don't let a more middling conclusion dilute the fact that Landline is still a pretty good movie, especially since it allows Edie Falco to shine as the mother of the Jacobs family whose frank tendencies show that Ali's personality is, well, "the apple does not fall far from the tree" and all that". Plus it's cool to see John Turturro in a movie of substance again, his acting here reminded me just how good he can be. More work for him and the rest of the lead actors of the enjoyable Gillian Robespierri feature Landline please!
Posted by Douglas Laman (NerdInTheBasement) at 1:56 PM