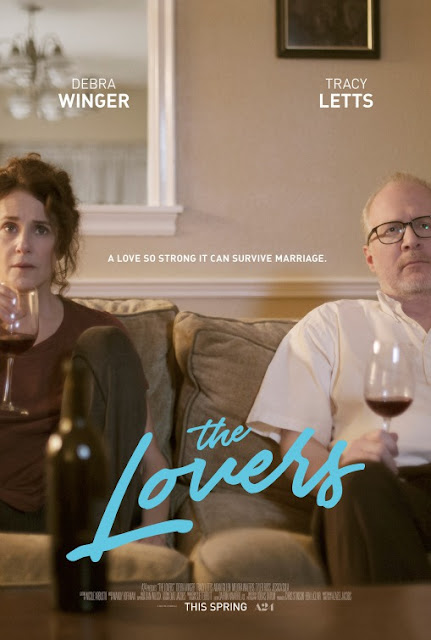 Once The Lovers starts, the marriage between Mary (Debra Winger) and Michael (Tracy Letts) is not in the middle of a rough patch nor is it about to hit a speed bump that interrupts romantic paradise. No, the moment the story begins, it's pretty damn clear that these two have drifted apart from one another for eons now. They're both seeing other people behind the other's back, with Michael striking up a romance with dance instructor Lucy (Melora Waters) and Mary engaging in an affair with writer Robert (Aidan Gillen). Each of their affairs have gone on long enough now that Michael and Mary's secret romantic partners beg them to cut off the marriage that has been going on for so long now.


Michael and Mary make promises to tell the other that their marriage is off, things aren't working out, all that good stuff, but then something funny happens...Mary and Michael begin to rekindle their romance. The prospect of things becoming more serious with their secret lovers seems to have re-energized their romance. The shoe is on the other foot, as it were, with Mary/Robert & Michael/Lucy originally being romantic partnerships created to escape the commitments of marriage and now those roles being reversed now that the responsibilities of the affairs has made Mary and Michael engaging in romance for the first time in eons feel like the romantic connection that's an escape.

Of course, Mary and Michael are, even once they begin to rekindle the spark that once brought them together, still unaware the other person is cheating on them, so there's still plenty of undiscussed tension between the two of them. Azazel Jacobs script is chock full of deceit, lies and intertwining secrets that coalesce into an entertaining exercise in character-driven romantic dramedy storytelling. Jacobs writing here is firmly situated close to reality, which makes the intriguing presence of a bombastic orchestral score composed by Mandy Hoffman all the more entertaining to hear. Mundane on-screen actions are accompanied by vibrant melodies that serve as a musical manifestation of just how mentally daunting this whole romantic situation is for the lead characters.

Their exteriors may be commonplace but the two lead characters of The Lovers have situations that are as big & brash as the omnipresent score that they're constantly grappling with internally. The way each character is consumed by their own internal issues is nicely reinforced by some clever visual cues, most notably a recurring motif of having a medium shot depicting Mary in the foreground and Michael engaged in an activity in the background, a clear demonstration of how these characters can even be in basically the same room together while still existing worlds apart. These sort of clever visual touches lend a lot of depth that's augmented by the great lead performances delivered by Debra Winger and Tracy Letts.

Debre Winger, doing only her third on-screen appearance in a feature film this decade here, and Tracy Letts seem to just be able to wring out strong chemistry in any situation, whether it's in depicting their characters fraught and distant dynamic early on in the story or when they're tasked with handling a more easygoing air between the two once they begin to rekindle their relationship. The small bits of realistically imperfect body language, like Winger trying to walk around this potted plant that's always in her way at work, they bring to their roles is especially good at reinforcing the realistic nature of the project while Letts deserves specific kudos for acing some of the funniest moments of the entire film which includes a mighty humorous fake cell phone call in a parking lot. If we're talking about the actors in this film though, I will register some disappointment that Aidan Gillen never once welcomed anybody "To The Scarch!", real missed opportunity there.

There is a climactic visit from the couple's son that ends up resulting in some of the weakest sequences of the entire duration of The Lovers, but at least those subpar moments end up dovetailing into an unexpected but lovely ending that refuses to tie up everything into a nice little bow. Romance is never orderly and it's smart of Azazel Jacobs to end the feature on a note that suggests the story of these two characters is far from finished. Truth be told, if Azazel Jacobs ever wanted to explore more of their story in a sequel called 2 The 2 Lovers, I'd be down for it since the two lead characters of The Lovers are so richly written and performed.
Posted by Douglas Laman (NerdInTheBasement) at 12:54 PM