The Room Will Tear You Apart With Confusion And Yuks 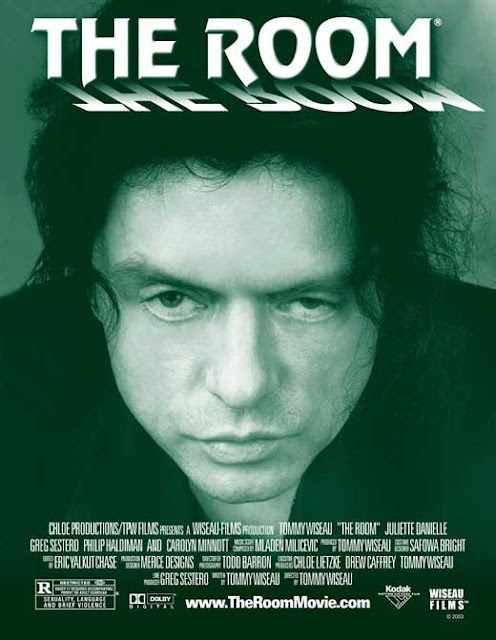 I've been hearing jokes centered around various lines and situations from The Room on the internet for as long as I can remember. You'd think that would diminish the experience of seeing the actual movie for the first time, but on the contrary, seeing the whole thing in full really is a whole other type of experience unto itself. Tommy Wiseau's attempt to channel the works of Tennesse Williams is thoroughly sincere and 110% committed to itself, but what it's committed to is absolute madness. It's a unique kind of madness though, the kind that could only come from the mind of Tommy Wiseau for better and for worse.


Johnny (Tommy Wiseau) is a successful guy who works at a job we never get to see and lives with his girlfriend Lisa (Juliette Danielle), whom every person in the movie can't stop slobbering over. Johnny and Lisa seem to have the perfect life, one that also involves a neighboring college student Denny (Phillip Haldiman), but unbeknownst to Johnny, Lisa is carrying on an affair with Johnny's best friend, Mark (Greg Sestero). You just know this kind of secret can't be contained forever and Johnny's birthday party may just be the time that all of the subliminal tension comes roaring to the surface and tear everything apart.


That's the most cohesive plot I can string together from the assorted sequences that play out throughout the feature, which is heavily comprised of random sequences that go absolutely nowhere like Denny getting mugged on the roof of his apartment building or Johnny and his buddies playing football in tuxedos. There are also a large number of sex scenes set to music that just screams "early 2000's" and were truly something I was not prepared for witnessing. It's as if Wiseau just typed down a stream of consciousness he had one morning that was entirely comprised of ideas for random short films and decided to jam them together into a conventional three-act movie.

A total disaster on a storytelling level does make for some glorious comedy though, especially any scene where Denny (a character I had no idea was in the movie prior to actually viewing it) is involved, this kid just comes in and out of the movie at random intervals in such a hilarious fashion. Tommy Wiseau's delivery of various pieces of dialogue is truly incredible too, with something like "How's your sex life?" superseding its status as an oft-repeated internet meme to be reborn as simply a magnificently abrupt out-of-nowhere piece of unintentionally hilarious dialogue that Wiseau delivers as casually as a person asking for a bottle of mustard at a diner.

I can't tell if The Room was more of a confounding experience or a humorous one, it may have been an equal measure of both. But it is cool that, even after having so many of its scenes and lines be repeated to death on the internet, that The Room is still able to work as a fascinating misfire, one whose thorough commitment to its own insane interpretation of intimate character-driven drama is fascinating to behold. Tommy Wiseau obviously started this project with an idiosyncratic vision of the world and for better and for worse, that vision has very much leapt onto the screen with his 2003 motion picture The Room.
Posted by Douglas Laman (NerdInTheBasement) at 12:23 PM