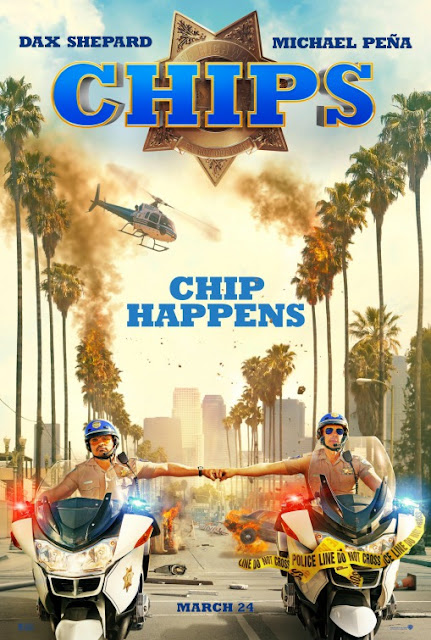 Look, when I said I wanted Michael Pena to headline more movies, I didn't mean....like this.

There's a lot of things that one could describe as odd about CHiPS on a basic conceptual level beyond the fact that human beings funded a major feature film adaptation of the 1970's TV show CHiPS in 2017. Most notably, the screenplay for CHiPS, which has its script credited solely to Dax Shepard, who also directs and headlines the film, seems to be channeling classic action/comedy cop movies (the kind Shane Black popularized) with extended action sequences, most notably one introducing us to the films antagonists played by Vincent D'onofrio, that are played entirely straight-faced. It then moves into the kind of raunchy foul-mouthed humor you'd expect from a D-grade R-rated American comedy in 2017.


Playing so much cop conspiracy intrigue in a serious vein is such an odd thing to do, especially since the audience is informed from the get-go who the corrupt cops are and, just like Baywatch, 2017's other anemic comedy adaptation of a classic TV show, we've gotta wait around for the boring protagonists to wade through clues and dead ends before finding the actual culprits behind various nefarious crimes. It makes for boring storytelling, which is in hefty supply here in a plot that revolves around undercover  FBI agent Frank Poncherello (Michael Pena) and Jon Baker (Dax Shepard) going through the oddball buddy cop routine as they try to adjust to being California Highway Patrol Officers.

Frank is aggressive and brash and he's also a sex addict, a trait of his character that goes nowhere while Jon is super by-the-book and studious. Their personalities waver as the movie goes on and don't end up adding to much in terms of either comedy or long-term character arcs. Pena and Shepard don't have much chemistry either together, which is the real killer of any potential buddy cop duo, and the jokes they exchange just keep dying on arrival at an alarming rate. Baker having an expansive vocabulary and being insightful into Poncherello's psyche wasn't all that funny the first time around, why keep bringing it back?

There aren't even any delightful supporting characters to help bring the yuks that our two lead characters certainly aren't supplying. D'Onofrio's baddie is somehow even worse than the one he played in Jurassic World and his personality of being a tough guy who feels protective of someone close to him (it's his son here) just makes the character feel like a lackluster knock-off of Wilson Fisk. There isn't even a fun police captain to bounce off of Poncherello and Baker, though there are a few female characters in the story that exist to either be love interests, ungrateful exes or the butt of jokes about their appearance.

The treatment of women in CHiPs is thoroughly uncomfortable even by the standards of bro-tastic American comedies. One extended gag in the third act revolves around Poncherello reacting to seeing the naked body of an older woman by recoiling in horror and agony like he's just caught a glimpse of the pits of hell themselves. That's the kind of humor we're dealing with in CHiPs and it makes for an agonizingly overlong experience.  The rampant sexism, the dumb corrupt cop espionage plot taken way too seriously and the direly executed jokes would all be bad on their own but combined here, they make for one uniquely awful cinematic entity.