"This Is Getting Out of Hand! Now There Are Two of Them!": Star Wars: The Last Jedi Avoids Sophomore Slump And Has Massive Box Office Bow 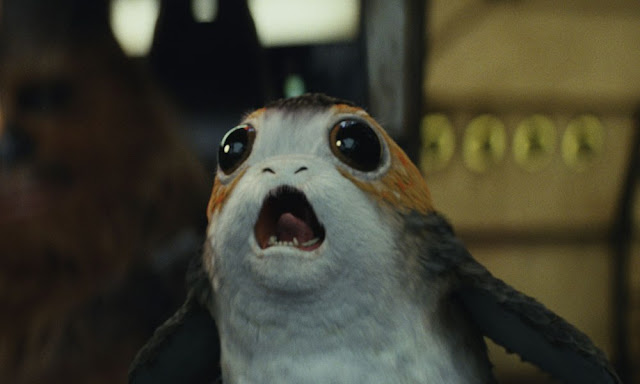 Star Wars: The Last Jedi was a movie whose box office performance I was most curious to see given how prior sequels to big record-breaking blockbusters had performed in the past. Most movies that open to over $150 million end up having sequels that open below their predecessors, with the occasional exception of something like The Hunger Games: Catching Fire (which went up 5% from the first Hunger Games) and The Dark Knight Rises (which went up 1.5% from The Dark Knight). The Last Jedi was down from The Force Awakens (how could it not?) but that's the only real complaint you could lob at the title as it ended up generating a massive $220 million opening weekend.

The good news for The Last Jedi was that people absolutely loved The Force Awakens and its characters and trailers promising new & exciting developments for them assured viewers that they weren't just repeating stuff from The Force Awakens. An omnipresent marketing campaign combined with positive buzz from The Force Awakens ensured that The Last Jedi was destined for massive box office. If it holds like Rogue One last year, it would make around $755 million domestically and if it holds any better than that over the lucrative holiday season, it's gonna end up surpassing $760 million haul of Rogue One to become the second biggest movie ever at the domestic box office.

In second place was fellow newcomer Ferdinand, which grossed $13.3 million, by far the lowest-grossing opening weekend in history for Blue Sky Studios and the first time one of their titles has opened beneath $20 million. Of course, family movies opening in December leg out far better than they would at other times of the year; the fourth Chipmunks movie opened against The Force Awakens two years ago and opened to $14.2 million before doing 6 times its opening weekend for an 85 million haul while Charlotte's Web opened in this same December 15th corridor and did 7.3 times its opening weekend for an $82.9 million haul. Ferdinand's a more expensive project than those two though (it's got a $111 million budget) and has greater box office expectations placed to it being a computer-animated family movie. Plus, competition from The Greatest Showman and Jumanji means the future could be tough for Ferdinand, though it'll probably still crack $80 million here domestically.

Thor: Ragnarok dropped 52% this weekend, on par with the 51% Doctor Strange dropped in the face of Rogue One last year, and grossed another $2.9 million, bringing its domestic haul to $306.3 million. Dropping more than expected this frame was The Disaster Artist, which dropped 58% to add another $2.6 million to its domestic run that now stands at a solid $12.9 million. Will it become only the fifth A24 movie ever to gross over $20 million? That depends on how many of its screens it can hold onto next weekend. Murder On The Orient Express chugged into ninth place this weekend, dropping 52% to add another $2.4 million to a domestic run that now stands at a great $97.2 million. Rounding out the top ten was Lady Bird, which was one of only three titles in the top 12 to drop under 40% from last weekend by going down only 39% to gross another $2.1 million, bringing its domestic gross to $25.9 million, making it the second biggest A24 movie of all-time.

The Star was nestled right outside of the top ten and managed to gross another $1.7 million, a 52% drop from last weekend, and now this one's grossed $35.3 million. No word yet on how last weekend's new wide release Just Getting Started performed this weekend, Broad Green Pictures has not reported any box office figures from that film yet. Anywho, The Shape of Water expanded into 158 theaters and continued its strong box office run by grossing $1.73 million for an $11,000 per-theater average. Guillermo Del Toro's newest movie has grossed $3.6 million so far and seems poised and ready for a strong wide release opening weekend this coming Friday. Fellow Holiday Season 2017 Fox Searchlight title Three Billboards Outside Ebbing, Missouri was right behind Shape of Water with a $1.6 million gross this weekend, a 43% drop from last weekend, that gives the Martin McDonagh movie a $21.3 million domestic gross. It is now only the seventh movie of 2017 to start its domestic run in limited release and end up grossing over $20 million domestically.

The top 12 movies this weekend grossed a total of $270.4 million, the biggest 50th weekend of any given year and the third biggest weekend of all-time. Looks like 2017, which has grossed $10.27 billion so far and is now running ahead of every other year in history except for 2016, is going out on a high note in terms of domestic box office performance.
Posted by Douglas Laman (NerdInTheBasement) at 11:54 AM