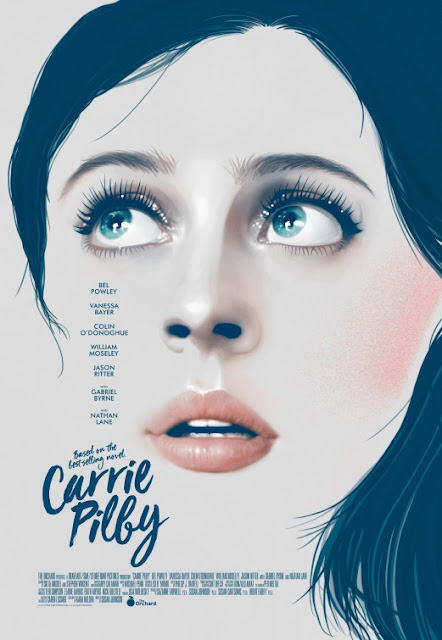 Being intellectually gifted has served Carrie Pilby (Bel Powley) well in some areas of her life, such as her academic pursuits that had her skipping grades like crazy and then going to Harvard at a young age. On the other hand, that same IQ has left her distancing herself heavily from people, meaning she's a 19-year-old with little to no social experience. Her therapist, Dr. Petrov (Nathan Lane), suggests Carrie Pilby put together a list of goals (which consist of stuff like "Going On A Date" or "Make A Friend") that she can achieve in the coming months so that she can begin to expand her horizons in meaningful ways.


Carrie Pilby's journey following through this list, chronicled in the Susan Johnson directed movie named after its lead character, has her engaging in, among other tasks, a new job that her estranged father got her as well as trying her hand at the dating scene. It's a journey that has its share of interesting moments but it's really hindered by a screenplay penned by Kara Holden and Dean Craig that just can't seem to make its titular character as unique and interesting as possible, which is a shame because there's some really interesting elements built into Carrie Pilby's very DNA simply from the fact that she's a female version of the loveable intellectually gifted asshole, the type of character Benedict Cumberbatch is constantly playing.

It's rare you see that type of character get played by a woman and the best moments of Carrie Pilby stem from gender-specific details, such as how, twice in her life, older men (one of whom is an older predatory college professor) who are looking at her as a potential romantic partner only get indignant with Carrie Pilby when she begins to stand up for herself and her own thoughts & desires. Recognizing that women who stand up for themselves against men are typically going to be seen as simply "disagreeable" or "whiny" by those same men is an interesting perspective that you don't get to see in typical movies starring this type of, frequently male, character. Bel Powley's performance, her first lead role since her phenomenal work in The Diary of a Teenage Girl, also frequently adds in little details that help make this character and her experiences feel more real and vibrant.

Unfortunately, a lot of this movie gets sunk in more generic storytelling details that is direly derivative. The various supporting players in her story, including a wacky partying co-worker played by Vanessa Bayer (an actor who frequently struggles with delivering convincing line deliveries), all feel cribbed from other movies, they're just not interesting enough to feel as unique as they should be. Late-in-the-game story turns are also heavily predictable, as potentially interesting developments, like Pilby (correctly) saying that a few items written on a sheet of paper can't rectify her entire life, are eschewed in favor of more bland and tidy conclusions that have her resolving all her personal problems, including her long-standing issues with her dad, in the span of one movie.

Wrapping up the plot in such a woefully broad manner means Carrie Pilby's larger character arc concludes in an underwhelming manner. What a pity given factors like what an interesting character she frequently is, how talented Bel Powley is as an actor and how director Susan Johnson shows some clever instincts as a filmmaker, most notably in how she frames a pivotal yet casual conversation between Pilby and her love interest in a single take. Those kinds of elements deserved a better movie to inhabit than the mixed bag that is Carrie Pilby which really should have taken a cue from its idiosyncratic lead character and opted for less generic storytelling developments.