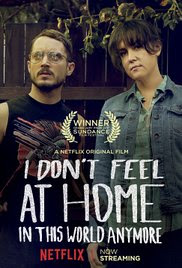 For his first feature-length project as a director (and his second foray into such a field as a writer), Macon Blair quickly establishes a glib view of humanity that's dragging the lead character of I Don't Feel At Home In This World Anymore, Ruth Kimky (Melanie Lynskey) down. Every day she see's people polluting the environment with their cars, random strangers acting cruel to one another and everyone around her constantly acting so so selfish. Her idea that everyone else on this planet is just selfish and cruel gets reinforced when her home gets burglarized and the law enforcement officers in charge of the case don't seem to be in too much of a hurry to solve the burglary.


These opening sequences of I Don't Feel At Home In This World Anymore are a relentless assault of despair but there is a morbid fascination to be wrung out of watching such a pessimistic (and frequently accurate) vision of the world, especially when it results in some great dark comedy like Ruth getting asked about a vehemently racist deceased patient's last words. The introduction of local loveable weirdo Tony (Elijah Wood) is also fun, especially since Tony is the kind of stylized character who totally feels ripped out of reality, I've totally known dudes like him who are just as devout to Christ as they are to being total experts on every piece of weaponry known to man.

Surely after she meets Tony, Ruth decides she's done just watching the world go to hell around her, she's going to take matters regarding her own life into her own hands. She manages to track down the location of her stolen laptop and, after much internal debating on what to do in this situation, settles on asking for the help of always battle ready Tony to get it back. A joke involving one of Tony's ninja throwing stars getting stuck in a wall during this rescue mission is one of the best gags of the film and the dynamic between Ruth & Tony (they're both so out of their field in this kind of scenario for very different reasons) here is certainly enjoyable.

However, Ruth's decision to track down all her stolen items leads the entire film down a more lackluster storyline that soon takes main precedence involving a trio of local criminals who are mad about how Ruth and Tony's new attempts for vigilant justice are interfering with their own criminal operations. David Yow is sometimes fun as the leader of this trio, but it all feels more rote than it should be. I Don't Feel At Home In This World Anymore starts out with such interesting somber views of humanity and the fact that it leads to a climax comprised of generic gangster action just feels like an underwhelming capper to a story that squanders its potential.

More successful on a storytelling level is Ruth's second and third act detours into embracing the kind of selfish behavior she used to deride, especially since it leads to a handful of thoroughly humorous moments. However, even this element of the story ends up fizzling out in a particularly predictable manner. Our two lead actors are at least consistently putting in good work here though, Melanie Lynskey is great at portraying her character as a realistically and relatably frustrated individual who seems to be the only one aware of just how topsy-turvy the worlds gotten in terms of adhering to any sort of selfless moral code.

Elijah Wood departs heavily from his loveable everyman role in Lord of The Rings as well as his jerky faux-"nice guy" routine in Eternal Sunshine of the Spotless Mind by playing the endlessly quirky Tony in a way that makes it clear the actor loves this character and isn't performing him in a mocking manner, a smart decision that turns out to be a key reason for why Tony works so well as a character. If only these two noteworthy lead performances got to star in a movie that didn't end up following up its more promising earlier sequences with underwhelming & non-substantive gangster hijinks that just didn't feel at home with the better parts of I Don't Feel At Home In This World Anymore.
Posted by Douglas Laman (NerdInTheBasement) at 7:54 PM