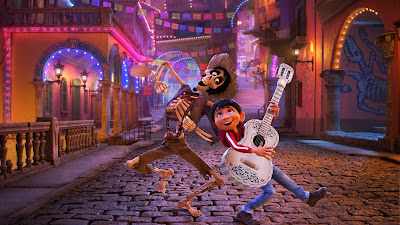 For only the third time in 2017, a single title has managed to be number one at the domestic box office for three weeks in a row. Following in the footsteps of The Fate Of The Furious and The Hitman's Bodyguard, Coco led the 2017 box office again with $18.3 million. That's only a 33% dip from last week, a better third-weekend decline than Moana and on par with the 33% third-weekend drop of Tangled and on par with the $18.5 million third weekend sum Moana had last year. With $135.5 million in the bank so far, this one's playing only 7% behind Moana through the same point and has already handily surpassed $123 million domestic cume of the last PIXAR movie released at Thanksgiving, The Good Dinosaur. How high this one goes at the domestic box office will depend on how it holds in the face of the deluge of newcomers coming out during the holiday season, but right now it should handily surpass $200 million, becoming only the second animated movie of 2017 to gross over $200 million.

In second place for the third weekend in a row was Justice League, which went down 42% to gross another $9.5 million. That's on par with the 42% drop fellow pre-Thanksgiving blockbusters Fantastic Beasts and Mockingjay- Part One saw in their fourth weekends, though both titles had bigger individual fourth weekends. Justice League has now grossed $212 million domestically and, unless it thoroughly collapses in the face of The Last Jedi, should be able to play through the holiday season and is likely looking at a final domestic gross around $245 million. Meanwhile, Wonder kept on being a box office, well, wonder by grossing another $8.4 million, a 30% dip from last weekend. This one's now grossed $100.3 million, making it only the twelfth movie ever from Lionsgate to cross $100 million domestically and this also means its now done five times its $20 million budget. Considering this one will have no trouble holding onto its screens through Christmas, expect this one to gross at least $130 million domestically.

Expanding into wide release this weekend was The Disaster Artist, which opened to a robust $6.4 million from 840 theaters for a per-theater average of $7,661. In ten days of domestic play, this James Franco directorial effort has grossed $8 million, already making it the tenth biggest movie ever from A24. The fact that The Disaster Artist was able to play beyond just a cult curiosity can be chalked up to a strong marketing campaign from A24 that emphasized social media stunts that resonated with the millennial audience that has truly fallen in love with The Room. The plan is to apparently further expand this title in the weeks to come (how much wider it can go is debatable given just how many movies are coming out in the next two weeks) but it wouldn't be surprising to see this one eke past $20 million domestically.

Thor: Ragnarok went down 36% in its sixth frame to gross another $6.2 million, taking it well past $300 million with a domestic gross to date of $301.1 million. How many screens this one can hold onto after next week will determine how much it ends up making at the domestic box office, but at the very least, this one is headed for a strong $325 million finish. Daddy's Home 2 had the second-smallest weekend-to-weekend drop this weekend as it eased only 21% and added another $6 million to its domestic gross that now stands at $91.1 million. This one will easily crack $100 million domestically, making it only the tenth Christmas movie to ever do that domestically. Fellow early November 2017 title Murder On The Orient Express also held well this frame, dipping 24% to gross another $5.1 million for a $92.7 million domestic haul to date and is also handily going to crack $100 million domestically.  The Star dipped a tiny 10% this weekend to gross another $3.6 million, meaning its now grossed $32.2 million and has become the 16th biggest Christian movie ever made. Meanwhile, Lady Bird finally decreased weekend-to-weekend, though it only went down 17% to add another $3.5 million for a domestic gross of $21.3 million.

The sole movie to debut in wide release in North America in the time span between Thanksgiving and Star Wars: The Last Jedi premiered this weekend and that movie was the Morgan Freeman/Tommy Lee Jones vehicle Just Getting Started. This one got off to an anemic start of $3.1 million, which is the 41st worst opening weekend ever for a movie bowing in over 2,000 theaters. It's also the second worst wide release opening weekend ever for Broad Green Pictures, only behind the $589,014 debut of The Neon Demon. Struggling indie studio Broad Green Pictures has had a pretty terrible 2017 that included the studio shutting down their in-house production arm, and this is an anemic capper to that year.

Further expanding its theater count to 1,620 locations, Three Billboards Outside Ebbing, Missouri grossed another $2.8 million this weekend, a 35% drop from last weekend. This Martin McDonagh feature has grossed $18.3 million and that means it's now surpassed the $15 million domestic gross of Seven Psychopaths to become the directors biggest movie ever domestically. Going down only 22% was A Bad Moms Christmas, which meant it added another $2.6 million to a solid domestic haul that now stands at $68.7 million.

And now we move on to the arthouse releases, which have just been killing it at the box office since November 2017 kicked off and this weekend was no exception. The Shape Of Water was the highest grossing of the bunch, grossing $1.1 million from 41 theaters for a $26,829 per-theater average. In ten days, this one's grossed $1.3 million and looks like it's on its way to becoming a crossover mainstream hit. Grossing $777,000 from 53 locations for a per-theater average of $14,660 was Darkest Hour, which has now grossed $1.2 million domestically.  Continuing to expand in a minuscule amount of theaters was Call Me By Your Name, which went down only 1% from last weekend as it grossed $291,101 from 9 locations for a per-theater average of $32,345. This one's grossed $1.3 million so far and has plenty of gas left in its domestic box office tank. I, Tonya got off to a fantastic start, grossing $245,602 from 4 locations for a per-theater average of $61,401. This is handily the biggest opening weekend ever for the studio Neon and it'll be interesting to see how this one plays in the weeks ahead at the box office since it won't go into wide release until January 19th. Conversely, Wonder Wheel struggled mightily in its second weekend as it grossed only $155,805 from 47 theaters for a per-theater average of only $3,315. This one's grossed only $321,985 domestically and may not clear $1 million domestically, which would make it only the second Woody Allen directorial effort to gross under $1 million (along with 2008's Cassandra's Dreams) since 1987.

The Top 12 movies this weekend grossed a total of $76 million, which is about average for these post-Thanksigivng but pre-Holiday Season blockbusters weekends. Expect Star Wars: The Last Jedi to surpass that entire top 12 gross in its first day of release.
Posted by Douglas Laman (NerdInTheBasement) at 12:20 PM