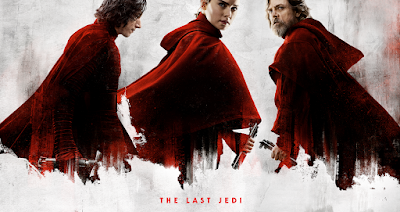 Wait, it's really December 2017? Where did the year go? Well, if it's the start of December, that can mean only one thing....it's time for my Holiday Box Office Predictions essay! Yep, for the fourth year in a row, I'm here to speculate on the box office performance of the various movies being put out in wide release over the next three weeks! Before we go further, you should note that all the opening weekend predictions cover only a movies 3-day opening weekend (spanning from Friday to Sunday) and that the only movie expanding from limited release into wide release over the next three weeks covered here is The Disaster Artist. Wonder Wheel, The Shape Of Water and Darkest Hour are all supposed to go into wide release over this period, but The Disaster Artist was the only one with a projected theater count to work with and that really does help things out when trying to predict how a film will fare when it goes into wide release.

With all that out of the way, let's look at my predictions for how things will go down at the box office over the holiday season of 2017!

The Disaster Artist
After bowing to such great results in limited release, can this James Franco directed project find similar success in wide release? It's a coin toss on that front in my opinion. The Room is a major cult movie and may just appeal to a niche audience, but that niche audience may be bigger than people realize since The Room really has caught on like wildfire beyond just movie geeks. An avalanche of positive buzz should boost the movie's profile and help this one have a decent wide release opening weekend and who knows, this one may go slightly higher than my box office predictions. Stranger things, like a movie being made out of Tommy Wiseau making The Room, have happened...

Just Getting Started
Be honest dear reader, did you even know this was coming out? Even if you were unaware of its existence, there is a comedy starring Morgan Freeman and Tommy Lee Jones from the director of Tin Cup debuting this coming Friday that will be the lone new wide release opening in between Thanksgiving 2017 and Star Wars: The Last Jedi. This title hails from Broad Green Pictures, a studio that's had dire straits this year after a number of major financial misfires like The Infiltrator and Bad Santa 2 and even shuttered their in-house production arm, Just Getting Started is the last result to emerge from them creating their own in-house projects. Given the meek marketing push it's receiving, Broad Green Pictures is looking to just dump this one and then move on and audiences are likely to do the same.

Star Wars: The Last Jedi
So, this is the big one. There's no question that Star Wars: The Last Jedi will end up becoming the biggest movie of this holiday season, but there is a question over just how big this thing will be. There's basically no chance that The Last Jedi will beat out the domestic performance of The Force Awakens, mainly because its predeccesor was buoyed by it being the first new Star Wars movie in over a decade. Plus, sequels to movies that gross over $300 million, aside from the occasional Catching Fire or Finding Dory, typically make less than their predeccesor and that includes past Star Wars sequels like The Empire Strikes Back and Attack of The Clones that made less than the Star Wars entires that came just before them.

Still, The Last Jedi should still make massive amounts of cash and handily walk away as the biggest movie of 2017. Expect this one to also become only the fourth movie in history to open to over $200 million on its domestic opening weekend and then play over the holiday season to become one of the biggest films in history. These Star Wars things seem to be real moneymakers folks, what can I say?

Ferdinand
Following up on Horton Hears A Who! and The Peanuts Movie, Blue Sky Studios returns to adapting beloved figures of children's literature with Ferdinand. The enduring popularity of its source material as well as being the most traditionally family-friendly film released over the extended Holiday 2017 are major boons to this one's profile as well as highlighting popular and well-liked celebrities John Cena and Kate McKinnon. However, the last few months of marketing have taken the film in a more generic direction highlighting pop tunes (most notably The Macarena) that will likely alienate adult viewers, meaning competition from more all-ages entertainment like Star Wars and Jumanji could end up really hurting this one. I'll say, right now, this one ends up doing ok but not great business domestically. 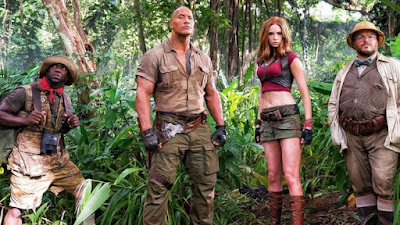 Jumanji: Welcome To The Jungle
Jumani looked like it could really go either way at the box office for a while there considering that, in its favor, it did have Dwayne Johnson firmly planted in the family-friendly light hearted material audiences love seeing him the most in, but on the other hand, would it be too different from its predecessor and end up alienating both fans of the original film and potential new fans in the process? Recent marketing and the first box office tracking for the title indicate Sony/Columbia have a much needed box office hit on their hands though and much of that can be attributed to how this one's been smartly marketed as fun escapist fare instead of as a grim n' gritty take on the Jumanji mythos. Expect this one to be a big hit over the holiday break.

Pitch Perfect 3
The Pitch Perfect movies have been some of the most popular comedies of the last few years so this new entry in the series is looking very much like another box office smash hit in the making. This one won't make as much as Pitch Perfect 2 both because of more competition in the marketplace and because the second film didn't generate as much as positive buzz as the first one, but this one should still handily cross $100 million domestically and close out the series on a financial high note.

The Greatest Showman
I can really see The Greatest Showman going either way in terms of box office performance. Could this one break out big time at the box office like past 20th Century Fox Christmastime family movies and even just most musicals released at Christmastime? Certainly! Even competition from Star Wars, Jumanji and Ferdinand won't be too much of a factor since past holiday seasons have shown multiple family movies can thrive in the marketplace. On the other hand, the marketing for this one has felt weirdly meek (why did a second trailer for it get released just one month prior to its release?) and the premise of following a musical version of P.T. Barnum's life may not have much appeal to the family audience that its PG MPAA rating makes it clear it wants to attract. In summation, I can easily see The Greatest Showman being a Les Miserables-like box office hit....but I can also see it possibly following in the footsteps of past Christmastime musical box office duds like Phantom of the Opera and Sweeney Todd.

Downsizing
Paramount Pictures has actually put together a fun marketing campaign for Downsizing that takes full advantage of the premise of Matt Damon shrinking down to minuscule size and combining that with Matt Damon being a consistent box office draw would normally make Downsizing a prime candidate for this holiday seasons big adult drama sleeper hit. However, there are some obstacles in this one's way, most notably that the premise apparently doesn't line up with the marketing campaign entirely, audiences are not fans of that in the slightest. More mixed reviews are also cropping up for this Alexander Payne project and those can be anemic for an adult-skewing drama. Point being, it'll be very interesting to see how this one performs at the box office and if it can manage to close out Matt Damon's rough time at the 2017 box office (The Great Wall and especially Suburbicon were box office bombs) on a high note.

All The Money In The World
Being a big budget drama from director Ridley Scott and starring actors like Michelle Williams and Mark Wahlberg meant All The Money In The World was gonna be a high-profile motion picture one way or the other, but the fact that it's been swept up in the Kevin Spacey sexual assault allegations has put the film on everyone's radar. Kevin Spacey, originally slated to play J. Paul Getty, has been replaced at the last minute by Christopher Plummer, who started filming the role just two weeks. That means the marketing for the film has been minimal up to this point, this explaining the lackluster tracking up to this point. Call me crazy, but I have a hunch this one will beat its tracking big time, though it's going to be more middle-of-the-road in terms of domestic box office performances of Ridley Scott directorial projects.

Father Figures
Originally supposed to come out on the first weekend of November 2016,  Father Figures arrives this Christmas a way to continue a recent trend of releasing comedies centered around fathers during the holiday season (see also: the first Daddy's Home feature and Why Him?).. Father Figures will likely be lucky to even get close to the success of Why Him? from last year though thanks to trailers and TV commercials that have been low on memorable humorous moments while its two leading men, Ed Helms & especially Owen Wilson, have mixed track records headlining recent comedies. Barring a Christmas miracle, Father Figures will likely be the big money loser of this holiday season.