Pottersville Is Strange Yuletide Fare That Embraces Sentimentality Over Laughs 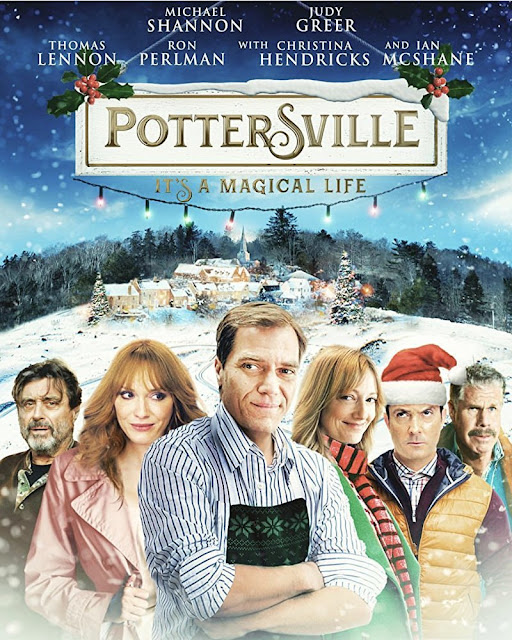 We typically cast Michael Shannon in dark, foreboding roles that take advantage of the man's ability to play intense characters so well. But Shannon can play different kinds of characters equally well too, just look at last years Midnight Special which has him deliver some of his best work as a man just looking to get his super-powered son to safety. For Pottersville, Shannon steps into the realm of comedy, an area he's not entirely inexperienced in (he was in the David Wain spoof comedy They Came Together as well as having a key supporting role in The Night Before) and one he could flourish in given the right project. Pottersville...is not that project.


For Pottersville, Michael Shannon plays the lead character of Maynard Greiger, the owner of a local shop who lives a delicate easygoing life that's thrown into disarray when he discovers his wife (Christina Hendricks) is cheating on him. He also makes the discovery that his wife is a furry. In a drunken stupor, he dons a Bigfoot costume in an angry response to his wife being a furry and his antics in that outfit lead the local townspeople to believe that Bigfoot really exists and actually lives in their small town. This discovery leads Maynard to don the Bigfoot outfit each night and for a reality TV show personality, Brock Masterson (Thomas Lennon), to come into the town and investigate the Bigfoot situation.

If that sounds like a weird jumble of a plot, well, that's because it is, the movie really has to tie itself into knots to get the basic plot of "Michael Shannon dresses up as Bigfoot each night" into motion. The movie goes full steam ahead on trying to get that storytelling endpoint and the destination isn't funny enough to justify the convoluted road to get there. If only there were more jokes here to compensate for the lackluster storytelling (in a comedic movie, the presence of good jokes is ultimately more important than anything else!), but Pottersville mostly just goes for lazy jokes either mocking furries or mocking reality TV shows, both of which feels stale and the latter element is an avenue for comedy that was done to death a decade ago.

An indie production like Pottersville does manage to become noticeably better (though that only adds up to it being merely average overall) than bigger-budgeted 2017 comedies like Baywatch and The House mostly because the cast feels game for whatever kookiness the story throws at them and I wish such a troop of actors could have been utilized under a more bold comedic director (oh to think what David Wain could have done with this premise). Michael Shannon doing an extended Jimmy Stewart impression is pleasant while Ian McShane playing the Quint of this small town (a comparision the film makes explicit) allows for some fun committed McShane mayhem. Judy Greer, alas, is stuck in a thankless romantic interest role, a type of character she's been pigeonholed into far too often.

Even a solid cast that delivers sporadic moments of amusement can't keep Pottersville from sinking into a bizarre climax wherein a film that's spent 80% of its runtime making odd jokes about Bigfoot shenanigans and reality TV suddenly turns into sentimental sludge about how Michael Shannon's character is the real heart of this small town. An extended homage to the ending of It's A Wonderful Life feels like it could have come out of any random Hallmark holiday movie aside from one character saying "ass". It's a weird choice for Daniel Myers screenplay to end things on such a pathos-driven conclusion given that such endings need fully formed characters to work properly and Pottersville doesn't really have that at all. In a movie full of oddball decisions that don't result in nearly enough laughs as they should, that may be the most puzzling creative decision made in the underwhelming, but not painful, Yuletide tale Pottersville. Please let Michael Shannon's next foray into comedy be more consistently humorous than this!
Posted by Douglas Laman (NerdInTheBasement) at 1:23 PM