Denzel Washington Decides To Fight The Law And Nobody Wins In Roman J. Israel, Esq 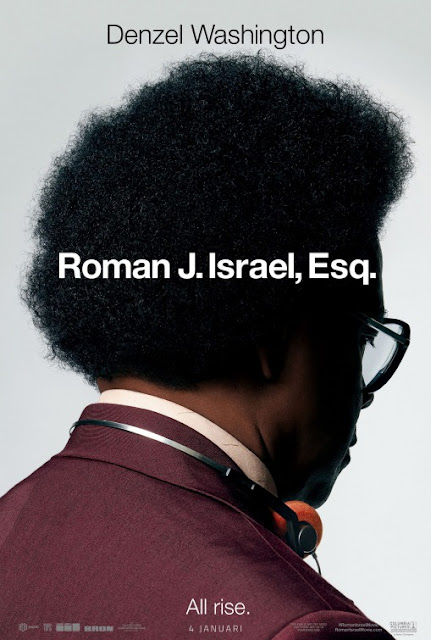 The new Dan Gilroy movie, Roman J. Israel, Esq., reminded me explicitly of last year's two Illumination Entertainment movies, The Secret Life of Pets and Sing (boy, I'm sure you're all tired of hearing that oft-repeated comparision, huh?). Like those two 2016 animated features, Roman J. Isreal, Esq. seems to have started out as a basic one-sentence pitch (what if Denzel Washington played a morally virtuous lawyer who becomes corrupt?) that people were understandably enamored with and then nobody bothered to flesh it out beyond that, resulting in a motion picture that tries to be a thoughtful character-drvien drama but it has no meat on its bones, it's skinnier thematically than a praying mantis.

The Roman J. Israel, Esq. of the title is played by Denzel Washington and a legal expert who spends most of his days using his savant skill in mathematics and remebering the tiniest of details to help his law firm behind closed doors. But when his partner (nicknamed The Bulldog) falls prey to a heart attack, he is forced to exit his cozy office and actually defend his clients in the courtroom, a task his socially inexpereinced demeanor isn't cut out for. His problems only escalate once he starts working for a law firm for George Pierce (Colin Farrell), a guy who has no time for the goody-two-shoes act Roman J. Israel lives by.

Feeling unappreciated and betaen down by a corrupt world, our main character soon makes some unsavory choices in the name of personal gain that ensure his world will never be the same, for good and for ill. It's easy to see why studios and producers would be intriogued by this basic outline of a story, especially when paired with how well Dan Gilroy's last movie Nightcrawler went. But any of the pulsating intrigue that Gilroy brought to his last project has eveaporated here, leaving good actors like Denzel Washington, Colin Farrell and Carmen Ejogo (can we please find something for Carmen Ejogo to be in that's worthy of her talents?) floundering around on-screen.

The problem we have here is that the various situations in Roman J. Isreal Esq. are played so broadly and undercooked that they can't actually function as being either intriguing or thoughtful. There's really no morally grey area here in on-screen actions or plot points, people are just as overtly good or bad as they seem and express their internal desires in dialogue that's simialrly obvious. Inherently, going down a more conpicuous route for the characters and their story isn't an awful idea but in execution here it leaves the whole movie feeling sorely lacking in depth and renders Roman J. Israel's entire story as simply the tale of a man whose morally upright until he isn't for a little bit.

Even the thoroughly reliable Denzel Washington suffers in the titular role as he decides to swing for the fences in his lead performance by portraying Roman J. Israel as one of the nerds from Revenge of the Nerds all grown up. Trying to turn such a caricature into a real human being in an amdirable task Washington occasionally achieves but Isreal mainly ends up being a bunch of quirks in a goofy wardrobe. There are times, most notably at the end of his character's first conversation with Carmen Ejogo's conversation, where it feels like stereotypical traits and attribtues of people on the Autism spectrum might be informing Washington's performance and, honestly, seeing Denzel Washington doing a depiction of a person explicitly on the Autism spectrum probably would have been farm ore interesting, even if it was bad, than the more generic uber-nerd he ends up playing here.

At least Isreal's character's tendency for quirky behavior means he pulls a Baby Driver and always lugs around an iPod with him that allows the film to play some well-chosen tunes over certain scenes. The soundtrack of existing songs that recurringly pop up in Roman J. Isreal, Esq. may be its best attribute overall, as the rest of it mostly just lands in the realm of being mediocre and disposable. Despite all the endless monologues Denzel Washington delivers about entities like morality and what not, there's just not much on the mind of Roman J. Israel, Esq., and that means a whole bunch of talented people (including cinemaotgrapher Robert Elswit, who I was shocked to see in the credits given how visually lackluster the project is) are stuck in this movie taking a cue from the audience; just twiddling their thumbs and waiting for this forgettable film to be over.
Posted by Douglas Laman (NerdInTheBasement) at 12:05 PM