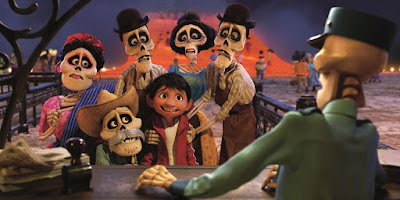 So the post-Thanksgiving 2017 weekend was a departure from past post-Thanksgiving frames in that all but two of the holdovers in the top 12 had weekend-to-weekend drops under 50%, whereas it's typical for most movies to lost over 60% in the post-Thanksgiving frame. What caused this? I don't have a clue, maybe it's the large amount of movies with positive buzz in the marketplace (Lady Bird and Three Billboards have oodles of critical accolades and awards attention to their name while Coco and Wonder both have an A+ CinemaScore grade stirring up audience goodwill) or maybe it's because a bunch of these holdovers are centered around the holidays or even just winter in general.

Whatever the reason, there's a lot to talk about in this weekend's box office and that includes the number one movie in America for the second week in a row, Coco. This PIXAR feature grossed $26 million in its second weekend, a 48% drop from its opening weekend, which is a much better second weekend hold than the majority of past animated Disney movies that opened over Thanksgiving, including Frozen and Moana. With $108.6 million in its coffers after twelve days of playing in the domestic marketplace, it looks like Coco has plenty of gas in the tank to help it play through the holidays.

Next up is Justice League, which went down 59%, a more traditional post-Thanksgiving hold and on par with the third weekend hold of Warner Bros. pre-Thanksgiving blockbuster Fantastic Beasts And Where To Find Them from last year. Grossing $16.5 million this frame, The Steppenwolf Movie has now accumulated $197.3 million domestically and will surpass $200 million sometime this week. Looks like this one's headed for a final domestic gross just under or over $240 million. Meanwhile, Wonder held nicely and went down just 45% to gross another $12.5 million, bringing it up to a domestic haul of $88 million. If this one is able to still play on movie theaters into the extended holiday break at the end of the month (and it looks like it should be able to do just that), this one could go as high as $140 million domestically.

In fourth place was Thor: Ragnarok, which held much better in the post-Thanksgiving frame than past early November blockbusters like Skyfall and Doctor Strange. The newest Thor adventure went down only 42% and grossed another $9.6 million, giving it a $291.4 million domestic haul. Rounding out the top five was Daddy's Home 2, which went down only 43% to gross another $7.5 million and bringing it up to an $82.8 million domestic gross. Maybe this one will end up cracking $100 million domestically after all.  Easing down 49% was Murder On The Orient Express, which grossed another $6.7 million for an $84.7 million domestic total that is setting on the path for a $100 million final domestic cume.


For proof of the kind of unusually strong holds seen over this years post-Thanksgiving box office, look no further than a pair of November 2017 arthouse releases that increased over their grosses from last weekend, something that's never happened before in history. First up, a little movie called Lady Bird went into the history books by having the smallest post-Thanksgiving hold of all-time. This sleeper hit went up 12% from last weekend and grossed another $4.54 million at 1,194 theaters for a per-theater average of $3,806. Greta Gerwig’s directorial debut has grossed $17 million domestically so far and looks like it should be able to surpass Moonlight’s $27.8 million domestic cume to become A24’s biggest movie of all-time. Three Billboards Outside Ebbing, Missouri caught $4.5 million, a 3% increase from last weekend and a big enough gross to bring it up to $13.6 million. Looks like this one's just $1.4 million away from beating out Seven Psychopaths to become the biggest movie of Martin McDonaugh's career.

Going down 42% was The Star, that animated movie about Nativity animals that grossed another $4 million and has now amassed $27.2 million. Rounding out the top ten was A Bad Moms Christmas, which grossed $3.4 million, down only 29% from last weekend, giving it a domestic cume so far of $64.8 million. Just outside the top ten was Roman J. Israel Esq. which was the only other holdover to drop over 50%  this weekend. Going down 56%, this one grossed $1.9 million this frame and has only grossed $9.5 million this frame.

And then in twelfth place was the real success story of the weekend, the opening weekend of The Disaster Artist. Opening in only 19 theaters, this one grossed a whopping $1.2 million for a per-theater average of $64,254, one of the best per-theater averages ever for a movie not opening in wide release but also opening in over 5 locations (Precious is one of the few movies bow in this kind of release before). Who knows if this one will be able to have similar box office success when it goes into wide release on Friday, but The Disaster Artist got off to a phenomenal start this weekend that managed to become A24's third biggest opening weekend in history.

Charles Dickens made miserly amounts of money this weekend with the second weekend gross of The Man Who Invented Christmas, which went down 36% to gross $863,053, bringing its domestic gross up to $3.1 million. Oh, did you know Titanic came back to theaters this weekend? Yeah, it played in 87 Dolby Vision locations (which it seems are only at AMC Theaters?) and grossed a solid $415,000 for a per-theater average of $4,770. Studios should do more re-releases of big movies like this beyond just one or two night Fathom Event screenings, this kind of box office performance shows there's totally an audience for it.

Moving on to new arthouse fare, Call Me By Your Name eased only 32% and grossed $281,280 from 4 locations (it didn't expand its theater count this weekend) for a phenomenal per-theater average of $70,320 for a domestic total of $908,175. The Shape Of Water bowed this weekend and continued the recent trend of holiday season 2017 arthouse hits by grossing $166,800 from just two theaters and garnering a per-theater average of $83,400, the fourth best per-theater average of 2017. Fox Searchlight plans to bring this one into wide release on December 22nd and it could be one that ends up being a box office sleeper hit. Meanwhile, Wonder Wheel bowed to underwhelming numbers, kicking off Amazon Studios tenure as a stand-alone self-distributing studio with a whimper. Grossing only $140,555 from 5 locations for a per-theater average of $28,111. This is the worst opening weekend for a Woody Allen directorial effort in the 21st century and does not bode well for its box office chances, especially given how many high-profile movies are playing in the arthouse sector right now. In its second weekend, Darkest Hour grossed $109,000, a 37% drop from last weekend, from 4 locations (like Call Me By Your Name, this one didn't adjust its theater count in its second weekend) and has now amassed $411,481 domestically.

The top 12 movies this weekend grossed $98.7 million, which is the second biggest post-Thanksgiving frame of all-time and kicks of December 2017 in high gear.
Posted by Douglas Laman (NerdInTheBasement) at 10:47 AM