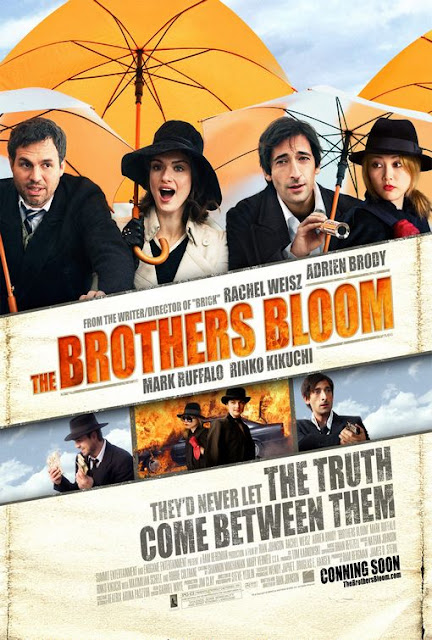 The occasionally wacky humor of Star Wars: The Last Jedi was a surprise to many viewers of that space opera, but thinking on it, that sort of humor feels like trademark Rian Johnson, especially in regards to his 2009 feature The Brothers Bloom, which is chock full of stylized gags that feel heavily reminiscent of Monty Python or perhaps Wes Anderson. It takes a little while to get into the heavily ridiculous aesthetic of The Brothers Bloom, but taken as a whole, it's easy to see why Rian Johnson decided to go full-on silly since he's doing an extended homage to the caper subgenre with this project and that's a section of cinema that's well-known for its heightened tendencies.


The two brothers of the title are Bloom Bloom (Adrien Brody) and Stephen Bloom (Mark Ruffalo), brothers who were orphaned at a young age and forced to survive on their own in this world. As part of this survival, Stephen Bloom began to use his wits to create elaborate cons to help himself and his brother get ahead in the world. At first, Bloom was fine with just going along with his brother's plans, but as an adult, he yearns for a simpler life devoid of espionage and long-cons. Stephen manages to wrangle in his brother for one last job involving Penelope Stamp (Rachel Weisz), a woman heavily isolated for her entire life who yearns for adventure, that keeps spiraling out of control as new difficulties keep showing up and complicating matters.

In order for something as kooky as The Brothers Bloom to work, you need a group of actors who are able to fully commit to the irreverent spirit of the film and thankfully, Rian Johnson has just that in his four lead actors. Adrien Brody is fantastic as a guy who can serve as either a straight man to the lunacy happening around him or a more self-serious vessel for that lunacy to emerge from while Mark Ruffalo reminds us all what an incredibly versatile actor he is by being so entertaining as the constantly scheming member of the two Bloom brothers. Rinko Kikuchi as the Bloom's assistant and explosives expert is a total subdued riot and it's so much fun to see Rachel Weisz throw herself completely into her frequently bonkers role.

With these four actors immersing themselves fully into the caper craziness of The Brothers Bloom, it's no wonder the film is so frequently thoroughly enjoyable, even if Rian Johnson's does have a tendency to meander for too long and thus undercut the overall pacing of the movie, a crucial aspect for any film relying heavily on absurdist comedy. On the other hand, Johnson's screenplay does excel at emanating a confident air in its stylized tendencies, this movie hits the ground running with rapid-fire editing (that comes courtesy of Gabriel Wyre) and unorthodox gags and never looks back, this production is taking cues from its lead actors and just diving right into the fun the unique spirit of The Brothers Bloom provides.

It's also noteworthy how Johnson's script creates a surprisingly emotionally resonant climax that takes one by surprise in realizing just how much the viewer has come to care for these Bloom Brothers and their well-being as well as how the movie has subtly made the lead duo's relationship so engaging without you even noticing. It's a thematic card trick of sorts, the stylized gags and wacky tone distracting you from realizing that you're growing closer and closer to the lead characters and all of those elements are realized through some assured filmmaking and all around terrefic performances. Needless to say, The Brothers Bloom is the rare con one wouldn't mind getting wrapped up in!
Posted by Douglas Laman (NerdInTheBasement) at 11:59 AM