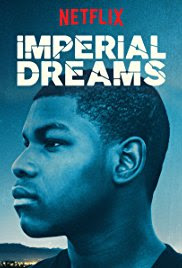 "Pull yourself up by your bootstraps". That famous phrase gets touted a lot in regards to someone not being able to live up to their full potential or realizing their goals as if saying such a phrase will immediately spark in a person the idea to finally go out there and live out the idealized version of their own life. But for many, it's not as simple as just "pulling yourself by your own bootstraps", there are more complex issues, both large and small in scale, to face on a daily basis that hinders one's ability to complete even the most basic tasks of trying to improve one's station in life. How can one even begin to pull themselves up by their bootstraps if their arms are being so heavily weighed down?


This is the kind of issue Bambi (John Boyega), the lead character of the 2017 Netflix movie Imperial Dreams, faces. Recently released from prison, all he wants to do now is be a good father to his son Daytone and focus on finding a career where he can use his skills in the art of poetry. That's all much easier said than done, of course, when he finds out that various government programs designed to help him ease back into society aren't able to help him while his criminal uncle, Shrimp (Glenn Plummer), wants Bambi to get back into the world of criminal activity that our protagonist is desperately trying to escape the shadow of. All Bambi wants is a better life for himself and his son but it seems like something that's always just out of his determined grasp.


This is a tale told in a glib manner that writers Malik Vitthal and Ismet Prcic don't shy away from depicting in an unflinching manner. There's a never-ending barrage of troubles and challenges for Bambi to face and the story does a fine job of placing the viewer within its lead character's perspective and communicating how weary & devastating it is to have to handle these sort of experiences on a daily basis. Even moments of triumph manage to carry long-term negative consequences for Bambi as he does his best to hold on to all that he holds dear, namely his son, in the face of constant hardship. Vitthal and Prcic make the austerity of Bambi's situation palpable but there's a human being within our lead character that helps lend a humanistic grounding to all the anguish, this isn't just watching suffering for the sake of suffering.

While the script works well with handling the majority of the penury Bambi and his son experience, I was left wishing certain key characters, like Bambi's uncle or his alcoholic mother, weren't such thinly sketched individuals who feel too much like cliches. The actors playing these characters do fine with the roles they're given, but there's a number of such unique elements to Bambi's experiences that I was left wishing these pivotal characters in his life had a similar sense of distinctiveness to them. It also must be said, without getting into spoiler territory, that the ending rushes through what should be a monumental blow to Bambi in too rapid of a succession, that concluding development really needed an extra scene to breathe so it could hit the viewer as hard as it hits Bambi.

Playing the lead role of Bambi is John Boyega, an actor who shot this movie about a year prior to filming his lead role in Star Wars: The Force Awakens. Like in his other 2017 drama Detroit (which I really liked for the record) Boyega gets to show off dramatic chops in Imperial Dreams that prove he's plenty capable and then some of being a memorable dramatic actor, he's excellent at portraying a man whose constantly trying to get back up and improve his life even when life keeps knocking him down. Even when the script deviates into more trite characters or plot points, Imperial Dreams is still a solid effort from promising first-time feature-film director Malik Vitthal (why hasn't he gotten any more directorial work since this premiered at Sundance in January 2014??) that deserves more notices if only for how much John Boyega excels playing the features lead character.
Posted by Douglas Laman (NerdInTheBasement) at 11:21 AM