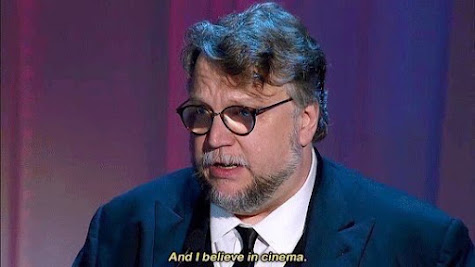 2020 has come to a close. And as we look to the future, it's hard not to be a bit gloomy about the future of movies.

With movie theaters still largely shut down in North America, it's hard to tell what the future of cinema will look like. Is everything moving to PVOD platforms? Will streaming services usurp the major studios? It doesn't help that the last month has reminded us all of how the biggest movie studios on Earth are in some pretty clumsy hands. WarnerMedia justifying repellant behavior towards artists as something "for the fans" was already worth a million eye rolls. A Disney Investors Call, meanwhile, was similarly discouraging. How many times can you hear people refer to movies as content before you feel like you wandered into a dystopia?

Mainstream movies have always been tainted by commercialism, but it's no longer something hiding between the lines. Millions of people watched that Investors Call, normalizing the use of language like "content" in the process. It's a turn of events that seems like a disappointing epilogue to the last few years of American cinema, which have squeezed out mid-budget filmmaking entirely for largely tentpole features. To boot, 20th Century Fox, sorry, 20th Century Studios, after nearly a century of regularly producing films, no longer exists. Having been absorbed by Disney, another producer of mid-budget films is now gone and turned into just another tentacle on the Disney octopus.

Throughout the last few years, essays expressing concern over where movies are headed have been commonplace. The concerns in those pieces have only been exacerbated by the COVID-19 pandemic. Over the last nine months, big companies have consolidated and the future of numerous movies has been put into question. With Tom Hanks recently saying that his new movie News of the World would be "the last adult movie with people just talking" released to theaters, it's all enough to make one, or at least me, despair about the future of cinema.

Sometimes, though, the easiest path out of despair is not to solve it, but to recognize that it's everywhere.

Doing research for a Looper article this week, I came across a most interesting New York Times article about the summer of 1982. In 2020, this is a season that's now gone down in history for delivering countless classics. The Thing. Tron. E.T. An Officer and a Gentleman. But in the moment, it didn't seem like a great summer for movies. On the contrary, this NYT piece was lamenting the state of film culture. Perhaps most fascinatingly is this passage which references how E.T. and Poltergeist were responsible for the majority of the box office that summer:

The wealth is not being spread around. The rich are getting richer and the poor are getting poorer, and all with a speed and a finality that scarcely allows the producer of the inbetween film even to daydream about having a hit.

Spielberg-produced movies have changed to Marvel movies, but this paragraph could literally be talking about the modern movie scene. This is true right down to the struggles of mid-budget films or "inbetween films" to get made in a Hollywood system that values big-budget spectacle above all else. The same sense of "what's old is new again" can be felt in a later paragraph, which reads:

Hollywood has always catered to the largest possible audience it could find but, as production costs have risen and as audiences have become more polarized, the gap between the hits and the flops has become so wide that margin for error has ceased to exist.

Extra amusing too is how this article claims that none of the films released in the summer of 1982 will become "seminal works". E.T. alone, which this piece dismisses as just "a nice film", would like to have a word, ditto The Thing! Additionally, it was intriguing to stumble upon a December 2007 Deadline Hollywood piece that remarks how Warner Bros. was in dire financial straits at the time of I Am Legend's release. The year and circumstances affecting Warner Bros. may be different in 2020, but its precarious state is, apparently, nothing new.

American cinema has always dealt with the fact that a handful of movies have dominated the box office. Major studios have always been caught up in seemingly apocalyptic scenarios. And as Robert Altman's The Player from 1992 indicates, movie studios being the place where creativity goes to die has been the norm for ages. This is not to say that these problems aren't massive issues, they certainly are. The fact that the problems referenced in the 1982 NYT article have only gotten exponentially worse in the last 40 years is a testament to how much America just lets the rich do whatever they want at the expense of the working-class.

But I do find some comfort in knowing that these problems aren't brand-new and, most importantly, that good movies have still emerged from these tumultuous times. Like I said, 1982 delivered numerous great movies despite two blockbusters dominating much of the pop culture conversation. Similarly, 2020, despite being the year movie theaters closed, delivered too many great movies to count. Cinema, as an artform, is in a precarious place right now. But the fact that it has been in the past and that good art has still endured under those conditions gives me hope. If good movies could make it through 2020, well, maybe they can make it through anything. Even Disney executives loving the word content almost as much as Mitch McConnell hates Americans can't dilute my hope that movies will endure just as they have in the past.

So long as we have each other, anything's possible.

Posted by Douglas Laman (NerdInTheBasement) at 9:07 AM