A Sun is a richly complex feat both visually and thematically 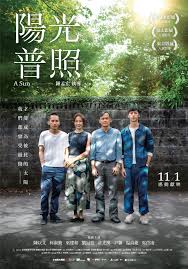 "Seize the day, decide your path." So reads a sign at A-Wen's (Chen Yi-wen) driving school and it's an expression he holds close to his heart. But as he and his family soon learn, claiming control over one's destiny is easier to talk about than actually practice. A-Wen and his family are thrown into chaos when the family's oldest son, A-Ho (Wu Chien-ho) is involved in his friend Radish's (Liu Kuan-ting) successful plan to chop off a man's arm off. Subsequently, A-Ho is sent into prison and the ripple effects of this event reverberate throughout the whole family. Mom Qin (Samantha Ko) tries to hold onto a relationship with A-Ho while taking care of his pregnant girlfriend while A-Wen completely ignores his son.
A Sun begins on one path before diverging into many fascinating different directions. In the process, it's able to insightfully explore how one person's actions are not just their own. The impact of A-Ho's reckless behavior stretches far and wide. In a brilliant stroke, writer/director Chung Mung-hong makes sure to emphasize how even the aftereffects of A-Ho's actions don't exist in a vacuum. For instance, the father of the man who lost an arm to Radish approaches A-Wen for money. Disgusted with the whole situation, A-Wen disregards the father and his obsessive pleas. Instead, A-Wen claims his son had no responsibility in this matter.
The desperate father doesn't just vanish from the story from there. Instead, he comes back to A-Wen's work the next day and begins to spew sewage from a sewage truck all over the driving school. A-Wen's dismissiveness has come back to haunt me in a most repugnant way. Lin Sheng-xiang's score incorporates pervasive wailing saxophones to accentuate the ludicrousness of this whole scenario as A-Wen's chickens come home to roost. It's an incredibly over-the-top sequence, but it's also a bold manifestation of this father's anger. Between his son losing a hand, his financial woes, and being dismissed by A-Wen, the only way this man can truly represent his feelings of anguish is through this sewage-laden demonstration.
This is one of many examples of Chung Mong-hong making such visually evocative reflections of the interior experiences of the characters of A Sun. Sometimes these manifest in more subdued ways, such as the shots of A-Wen simply stewing on his couch as his adopted son returns home from prison. The stark silence in the room as father-and-son reunite, A-Wen's refusal to make eye contact with A-Ho, the way cinematographer Nagao Nakashima quietly makes the space between the characters in this room feel like a massive canyon. It all works in beautiful harmony to perfectly sell just how far apart these two characters have drifted from one another. The successfully detached quality in this interaction has the extra benefit of making a later intimate conversation between A-Wen and A-Ho outside of a convenience store all the more emotionally affecting.
Colors are another well-employed visual trait of A Sun. Just because he's making an expansive drama doesn't mean that Mong-hong and Nakashima hold back on bright colors. Hues of blue are a constant fixture throughout the movie, especially in A-Ho's time in prison. Throughout the runtime, gold (like in A-Ho's eventual workspace as a car washer), red and green also get put to ample use. These colors pop off the screen and make A Sun as pleasing visually as it is on a character level. Also proving memorable is a visual motif of framing these characters through windows, between hallways, or other objects. There's always the sense that these characters, even when they're not in prison, are confined by forces larger than themselves. Even in their own homes, Mong-hong makes sure to emphasize to the viewer that they cannot escape the feeling of being trapped.

A Sun is a rich text on a visual and thematic level. Just those qualities alone make its 156-minute runtime fly right by. As a cherry on top, the cast is also top-to-bottom excellent, with Chen Yi-wen proving to be the standout as A-Wen. A character as cantankerous as he is haunted, Yi-wen has to handle some hefty material that makes the viewer alternate between sympathizing with A-wen and hating his guts. It's such a dense role but Yi-wen handles it with such grace. Plus, he nails the characters' final crucial scene, which lends further layers of complexity to an already intricate figure. Within him and A Sun as a whole movie, we see how labyrinthine one's life can be and how our actions never remain just our own. Keeping that in mind makes one contemplate if it's even possible to "seize the day, decide your path."

A Sun is now streaming on Netflix.