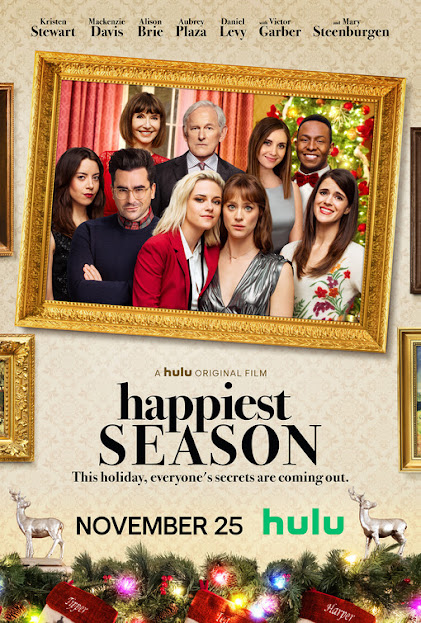 Happiest Season is the newest movie from writer/director Clea DuVall, a Christmas rom-com fixated on happy couple Abby Holland (Kristen Stewart) and Harper Caldwell (Mackenzie Davis). Harper invites Abby to come meet her parents, Ted (Victor Garber) and Tipper (Mary Steenburgen), over a big Christmas week gathering. On their way to the event, Harper drops a bombshell on Abby: she hasn't come out to her parents. Abby will now pose as Harper's heterosexual roommate as Harper gathers up the courage to come out to her parents. Holiday season family gatherings are always difficult but this particular week is gonna be a nightmare for Abby.

Happiest Season fares best when screenwriters DuVall and Mary Holland lean into the unique possibilities offered up by the fact that the film's protagonists are queer. An extended rendezvous into a gay bar with two drag queens leading a packed house into redefinitions of Christmas carols is already an entertaining sight. Stewart and Aubrey Plaza (playing the character of Riley) are so entertaining in their rapport in this scene while the entire sequence is something that you won't get from, say, The Holiday. The fact that it's followed by an extremely amusing visual gag contrasting the cozy interior of the gay bar with the cold & sterile aesthetic of a straight bar (appropriately named FRATTY'S) is just the icing on top.

A later scene where Abby and best friend John (Dan Levy) openly talk about what how coming out of the closet is different for everyone is another similarly unique highlight of Happiest Season. It's also another sequence that reminded me how nice it is to have queer cinema that isn't afraid to explicitly talk about queerness. Don't get me wrong, I love movies like Call Me By Your Name where queer experiences are reflected in longing gazes and ellipses in a conversation. But that doesn't have to be the only way queer experiences are explored in cinema. The most insightful dialogue in Happiest Season shows the value of being upfront on cinematic queer experiences.

But if the best moments of Happiest Season break new ground for holiday rom-com's, the home stretch of the movie struggles to fit its storyline into the tonal norms of this genre. Holiday rom-com's are supposed to have cozy happy endings where everything gets wrapped up with a pretty red bow on top next to a crackling fire. Happiest Season tries to do the same thing here but it feels too easy considering how repugnant Harper's family has been up to this point. DuVall and Holland's screenplay has to rush everybody in Harper's family through drastic character changes so that Happiest Season can adhere to a formulaic happy ending. It's all so hurried and inorganic.

What if Happiest Season had found a different way to create a happy ending? Maybe one that involved a found family or at least dealt with the darker complexities of its story? Props to DuVall and Holland for attempting to subvert the bleak endings that befall so many cinematic lesbians. However, there's a dissonance between Happiest Season's storyline and its eventual cozy tone that leaves something to be desire in the execution of that subversion. Despite this issue, I'd be lying if the ending of Happiest Season didn't manage to instill some warm and fuzzies in my heart. Also leaving an impact in DuVall and Holland's screenplay are nice little details, like an eventual friendship between John and Harper's eccentric sister Jane (Mary Holland).

Those clever features keep Happiest Season a pleasant diversion, as do the uniformly entertaining cast. Mary Steenburgen, for example, wrings effective dark comedy of the coldness of her character while Dan Levy, surprising no one who's seen his work on Schitt's Creek, absolutely nails all his comedic line deliveries. Best of all, Kristen Stewart makes the leap from dark indie comedies to lighthearted rom-coms with ease. Turns out Stewart really can do anything as she makes for an engaging lead character. In fact, Stewart got me so invested in Abby that I wished her movie ended up going down a more creative path in its flawed third-act.

Happiest Season stumbles the most when it's most adherent to formula. Thankfully, the moments where it chases its own unique vision of what a holiday season rom-com can be truly sparkle.