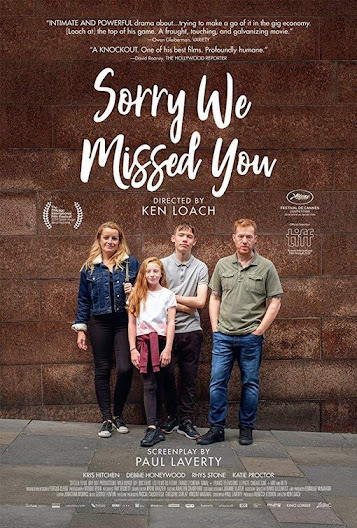 The gig economy is a new bedrock of the world economy. In the wake of the 2008 global recession and the popularity of services like Uber, this form of employment has become dominant for many people. While on the surface it offers opportunities for immediate cash, the fact that these companies don't have to adhere to labor laws creates enormous problems. As companies like Amazon and Uber make headlines for their dehumanizing approach to employees, it's astonishing more pop culture properties haven't tackled the perspective of living in this kind of economy. It's a problem that likely ties in how often poverty is overlooked in modern cinema from all over the world, which itself is tied into toxic notions about how poverty is "a choice".

Anywho, at least the new Ken Loach movie Sorry We Missed You is here to help counter the lack of stories about gig economy workers with this yarn about the Turner family. This family unit is led by Ricky (Kris Hitchen) and Abbie (Debbie Honeywood), the former working as a package delivery person and the latter working as a home care nurse. Their jobs keep the pair working almost all hours of the day. Meanwhile, they also have two kids,  Liza Jane Turner (Katie Proctor) and troubled teenager Seb Turner (Rhys Stone). Trying to keep this family together with all their employment responsibilities proves a monumental task, especially in regards to Ricky's increasingly demanding job.

Paul Laverty's screenplay is packed to the brim with great examples of real-world details that make the plight of the Turner family so discernible authentic. For one thing, there are their transportation woes. Ricky sells the family's van to have his own transportation for his delivery job. This leaves Abbie stuck taking the bus for her nursing gigs. This is the kind of struggle that other movies might only reference in offhand dialogue. Here in Sorry We Missed You, it's just another example of how turmoil is used to flesh out the individual perspectives of Ricky and Abbie. We can see why Ricky wants to have his own van for his job while fully understanding Abbie's frustration with being beholden to a bus route schedule.

Then there are the difficulties at Ricky's job, which isn't presented as an evil lair or anything like that. There's a naturalism to its presentation that makes it look like a run-of-the-mill location, which is the point. Brutal working conditions can thrive anywhere, not just in places that have been color-coded to indicate they can't be trusted. The performance of Ricky's superior Maloney (Ross Brewster) channels a similar vibe.  Whenever Ricky comes to Maloney with problems, Maloney's only response is a rehearsed line about the importance of working for the company and that "everyone's got problems". Maloney's cold and detached line deliveries play as a heartbreaking contrast to Ricky's constantly tormented circumstances.

In the character of Maloney and the business he oversees, Sorry We Missed You realizes the inevitable endpoint of seeing other human begins as just a means to a financial end. When you have more value for telxon's than people, well, that's where you have a problem. This problem is reflected in such a thoughtfully-rendered manner in Laverty's writing and Loach's direction. The latter element always keeps a level of a tangible reality in the plights of the Turner family. Melodrama is kept at bay thanks to Loach's keen eyes for knowing how to evoke real-world experiences and for making each new piece of character drama feel uniquely rendered.

Take the woes of Seb, a troubled teen boy with a penchant for graffiti. His storyline could have felt derivative of countless other stories about similarly wayward teenagers. But in the hands of Loach and Rhys Stone's performance, Seb comes alive as his own character. It's especially impressive how effectively the production reflects how his parents' financial struggles impact his own behavior. This isn't meant to shift the blame onto his parents but rather show the wide-ranging ripple effects of dehumanizing employment. The real world has shown just how devastating the consequences of the modern gig economy can be and Sorry We Missed You provides a boldly-realized cinematic reflection of that reality.

Posted by Douglas Laman (NerdInTheBasement) at 11:06 AM