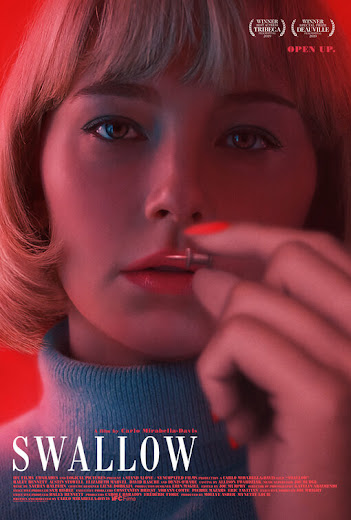 When it comes to Hayley Bennett, call me one of the neutral people from Futurama because "I have no strong feelings whatsoever" on her. This is not me attempting to be too cool for the room or insult Bennett, who seems like a really nice person in interviews. It's just that I haven't been especially bowled over by the performances I've seen from her up to this point, though, to be fair, movies like The Girl on the Train don't really offer any actor anything of substance to do. But now I've gone from neutral to utterly excited about Bennett as a performer thanks to her totally fearless lead performance in Swallow.

In Swallow, Bennett plays Hunter, a woman who lives a seemingly comfortable life with her wealthy husband, Richie Conrad (Austin Stowell). In reality, Hunter is constantly ignored by Richie and his parents. It's like she's just a prop for him to use and that only grows worse once she realizes that she's pregnant with Richie's kid. To give herself some jolt of life, Hunter begins to develop a fascination for swallowing things like ice cubes, thumbtacks, and marbles. This fascination gradually becomes a fixation as her life with Richie grows more and more unbearable. Swallowing inanimate objects is dangerous but it's still less painful than living with Richie.

So Swallow has a weird premise. This story is presented with nary a wink to the audience in sight. Writer/director Carlo Mirabella-Davis decides to just go all-in on executing this outlandish plot with a straight face. This all leads down a third-act detour into extremely heavy material involving a traumatic backstory for Hunter. The ambition inherent in this concept is admirable and, luckily, the execution proves even more impressive. Mirabella-Davis lends an eerie but also melancholy and discernibly human aura to Swallow. Those qualities are even more apparent in Bennett's performance, which serves as the lynchpin of the entire proceedings.

Bennett starts out the movie channeling the epitome of a rich wife, someone who could be on magazine covers and stock photos...well, almost. That's the brilliant thing about her lead performance. From the get-go, even before her character starts swallowing things, Bennett finds way to subtly suggest that not everything is alright with Hunter. The characters internal pain comes through even when she's grinning and bearing it during an awkward meal with Richie and his parents. There''s something so tangibly authentic about Bennett's depiction of concealed yet palpable torment. It's a quality that grabs you from the start and never lets go.

As the plot gets more and more outlandish, Bennett continues to imbue Hunter with down-to-Earth qualities. This is especially true in her depiction of Hunter trying to downplay her newfound fascination with eating things. Of course someone, when confronted about this, would shrug it off or try to play it off as "not a big deal". Hunter has spent her whole life being told she doesn't matter, why would she think this does? Bennett's performance effortlessly conveys these harrowing concepts while also fully embracing the utter strangeness of Swallow's central premise. It's hard to imagine Swallow being able to work properly without the character of Hunter working. Luckily, Bennett's work in the role delivers a standout lead performance.

Bennett's strong work is complimented by similarly noteworthy direction from Carlo Mirabella-Davis. I was especially impressed with Mirabella-Davis in regards to how both his writing and direction kept me on pins and needles unsure of where Swallow was going. Commendably, the proceedings never devolve into predictable treacle and nor do they end up spinning their wheels in the service of empty lunacy. Swallow follows its bold storytelling traits right to the very end all while digging deeper and deeper into Hunter as a character. To borrow another Futurama quote, good news everyone! Turns out you can have your cake and eat it too, or in the case of Swallow, have a thoughtful character study that also features a lady eating dirt.

Posted by Douglas Laman (NerdInTheBasement) at 8:42 AM