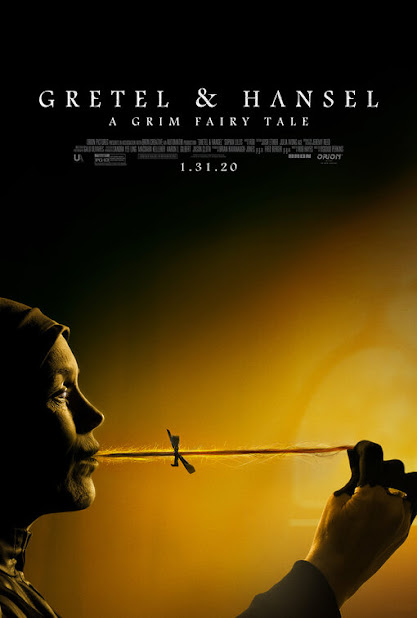 At this point, it's about as novel pointing out that classic fairy tales were actually dark creations as it is to observe that something "is really a Western if you think about it."  After so many years of gritty takes on public domain fairy tales, it's not exactly a fresh idea to ask "What if Rumpelstiltskin but he swears?" If you're gonna do a modern horror movie predicated on a "grim" reinterpretation of fairy tale, you better bring something new to the table. Gretel & Hansel doesn't exactly rewrite the book on these kinds of movies. However, it's got enough of its own warped charms to make it a decent exercise.

We all know the Hansel & Gretel tale so you know the basic concept for Gretel & Hansel (written by Rob Hayes and directed by Oz Perkins) concerning two kids who stumble onto a witch's home. In this version, though, Gretel (Sophia Lillis) is significantly older than her younger brother Hansel (Sam Leakey). The two aren't just left in the forest, they're abandoned by their mother because of the financial constraints she lives under. While traveling to a potential home with some woodcutters, Gretel & Hansel stumble onto a witch named Holda (Alice Kirge). She invites them into their home, but she isn't just interested in devouring the two of them like in the original fairy tale. She has plans for Gretel that could lead this young lady to discover wholly new parts of herself.

Above all else, Gretel & Hansel suggests that the A24 mold of horror movies have become mainstream enough to inspire duplicators. An unorthodox aspect ratio (in this case, 1.55:1), a pre-electricity period era setting, an emphasis on a slow-burn atmosphere, sparse yet intricately detailed cinematography. The ingredients that were such a critical part of The VVitch, Midsommar, and Hereditary are all here in Gretel & Hansel. Of course, those indie horror titles did not invent those qualities, but they did popularize them as required ingredients for modern heady horror titles, like Gretel & Hansel, to imitate.

How does Gretel & Hansel manage to evade feeling derivative? The striking cinematography from Galo Olivares does the trick. Gretel & Hansel is chock full of imagery that totally impresses in its ornate blocking and quietly eerie atmosphere. Extra props for how well Olivares and director Perkins incorporate stylized imagery into the proceedings to make both the viewer and Gretel doubt what is and isn't real. Such creepy shots and ambiguity ensure that Gretel & Hansel's PG-13 rating does not restrict its ability to instill actual fear in the viewer. For those worried this is a sanitized affair, though, worry not. There's a scene with Holda reaching into a barrel that's appropriately stomach-churning.

The rest of Gretel & Hansel isn't especially noteworthy, mostly because the restrained aesthetic keeps the viewer from totally connecting to the characters. I was never bored by Gretel's journey but I'd be lying if I said I was totally absorbed by it. However, as an atmospheric exercise, Gretel & Hansel registers as extremely well-crafted. Understand what you're getting into beforehand and Gretel & Hansel works well as a subdued and visual-oriented feature. If we must keep doing darker takes on classic fairy tales, let's get more of them in the mold of Gretel & Hansel, please.