Soul has got heart and visual imagination to spare 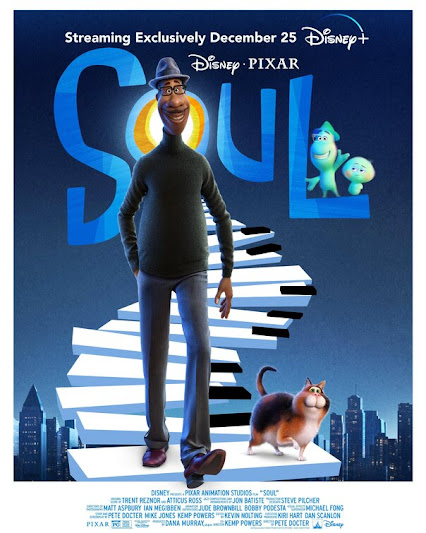 In the summer of 2018, I took a trip to New York City. It was my first-ever voyage to the Big Apple and offered up my first chance to meet some dear friends from the internet in the real world. In my time there, I didn't go to the usual NYC landmarks glimpsed at in the movies. No State of Liberty visits, no races up the Empire State Building staircases. Instead, me and my friends went to small thrift stores, we sang show tunes all night long in Marie's Crisis and we ate at hole-in-the-wall pizza shops. Not the kind of locations you see on a postcard, but they were so fun and made for such unique memories.

It's been more than two years since that trip, but my memories of it remain as vibrant as ever. A reminder of that glorious week remains in my wallet in the form of my Metro card, which I used to trace on NYC's subway system. One look at that ratty yellow card and I'm immediately transported to that life-changing week. Late into Soul, the film's protagonist, Joe Gardner (Jamie Foxx), takes a look at a Metro card in a wistful state and I immediately knew this film got it. Writer/directors Pete Docter and Kemp Powers understand what defines our best memories. They get what's really precious. Best of all, this duo, and Soul as a whole movie, understand what makes life worth living.

As Soul opens, Gardner is working as a Middle School music teacher in New York City. It's a job with its perks, but it's not his dream occupation. Gardner wants to be someone who plays the pianos in professional gigs. He gets the chance to do just that when he succeeds in an audition for the Dorothea Williams Quartet. Now with a public performance on the horizon, Gardner's life is looking up. Then he fell down that manhole. Now, Garden, in his spirit form, has fallen into The Great Before, the place where souls get their personalities and quirks prior to coming to Earth. Desperate to get back to his body on Earth, Gardner finds a potential route home through a jaded soul named 22 (Tina Fey), who wants nothing to do with going to Earth.

Among the many achievements in Soul is that it finally finds a proper home for PIXAR's love for combining stylized visuals with realistic backgrounds. This tendency really started to become prominent with their short film The Blue Umbrella and has since been a key trait of movies like The Good Dinosaur and Onward. Here in Soul, this design aesthetic finds a real purpose beyond being an impressive tech demo. The computer-animation renders Gardner's Soul as someplace you can reach out and touch. Every crack in the sidewalk, drop of sweat on the human characters, and piece of peeling paint on the walls feels like something you can reach out and touch. Especially impressively-realized are tight interior environments, which feel so cozy and intimate.

Meanwhile, everything in the realms beyond the mortal world is rendered with such grandiose visual tendencies. The vastness of a literal stairway to Heaven echoes the expansive cosmic canvas seen in 2001: A Space Odyssey. A realm between that stairway and The Great Before is a nightmarish zone devoid of color that's genuinely unsettling. As for The Great Before itself, it's a gloriously unpredictable world where the rules of physics are delightfully eschewed. Mentor figures that look like hand-drawn rendering of wire art figures loom over the physical manifestations of souls, who can conjure up anything (like lighters) as if they're Looney Tunes characters. Soul is a movie where so many of its visuals are motivated by unbridled imagination and it's a joy to witness.

Embracing both realism and stylized tendencies provide a great contrast between its two primary settings that helps to place viewers into the mindset of both Joe and 22. For Joe, we're just as overwhelmed as he is by all the wonders of The Great Before. As for 22, the everyday charms of reality are beautifully reflected in the tiniest details of the richly-realized animation. Soul manages to have its cake and eat it too on an animation level by pulling off totally opposing visual aesthetics. It's a great interpretation of a recurring visual technique in PIXAR's filmography while also making Soul visually pleasing on its own terms.

While the film is totally eye candy central even in its quiet scenes, part of what impressed me most about Soul is its commitment to keeping its story low-key. A movie contemplating everyday existence can't get swept up in pointless action sequences or superfluous digressions. The screenplay, thankfully, keeps things focused and appropriately restrained. Entire scenes are dedicated just to conversations between Gardner and one of his students or a particularly memorable scene where Garden gets to know his barber better. There's nary a Minions-esque loud joke in sight during these exchanges that could interrupt the emotional power of these sequences. Instead, Soul has enough confidence in both its story and its audience that it can just let these naturalistic conversations breathe.

As a result of this boldness, Soul quietly but effectively reflects its central theme related to the importance of getting to know the people around you. It's one of many deft touches throughout the story that proves as stimulating emotionally as the animation is dazzling. The richly human nature of the story is complemented by an assortment of memorable performances that bring so much extra personality to these characters. Rachel House is the stand-out of the cast with her turn as the humorously determined figure Terry, who functions as an ethereal complement to her similarly hysterical and resolute character in Hunt for the Wilderpeople.

There's plenty to praise with a movie as good as Soul, particularly in regards to its outstanding original score from Trent Reznor and Atticus Ross. But what really stuck with me most of all is how quietly wise this movie is. Soul understands the power the seemingly most throwaway parts of our life can have. What makes our life fulfilling can be found anywhere. In our interactions with others. In making movies as good as Soul. Or even in the memories we associate with a ratty old Metro card.