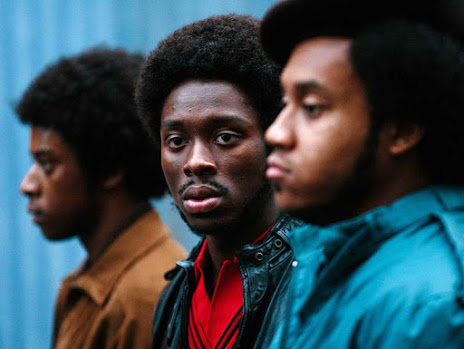 Across Steve McQueen's collection of Small Axe movies, the director has kept dipping his toes into new genres to exciting results. For Mangrove, McQueen made a courtroom drama that reverberated with urgency. Lovers Rock was a hangout movie in the style of Richard Linklater. Red, White and Blue was a unique approach to the police drama where antagonism emanated from the institution of policing itself rather than outside criminal forces. And now we have Alex Wheatle, the fourth Small Axe film that sees McQueen doing his own take on a biopic. While more bog-standard than the preceding three Small Axe entries, this is still a Steve McQueen movie so there's plenty to recommend.

Alex Wheatle (Sheyi Cole) is a real-life author whose origins are chronicled in a non-linear fashion in Alex Wheatle. Growing up in an adopted abusive household, Wheatle enters adulthood with a limited view of the wider world. However, with a little help from his new friends, he soon gets exposed to whole new cultures he'd previously only heard about, including the reggae music scene. Wheatle's first years as an independent adult end up coinciding with the 1981 Brixton Uprising, which forces a guy who has so often been on the sidelines to recognize that now is the time to fight back against oppressive forces. This is all told against a framing device that sees Wheatle in prison and sharing a cell with an eccentric cellmate.

Like many biopics, Alex Wheatle bites off more than it can chew in terms of how much story it wants to tell in such a limited amount of time. Running only 66 minutes, Wheatle has a tendency to just blaze right past seemingly crucial character developments for its titular lead character. Most notably, Wheatle's mid-movie transition to embracing his heritage feels too sudden. Giving things more time to breathe could have just made the already-fascinating detours all the more engaging. Even this abrupt development has its upsides though. Cole's performance, for instance, capably reflects Wheatle's transformation while still reminding us of the character we've always known.

Meanwhile, a whole sequence consisting of still images of the actual 1981 Brixton Uprising while a voice-over recites a poem ends up being one of the most stirring sequences in this entire Small Axe collection. Combining such powerful words with equally evocative imagery perfectly captures the humanity that this uprising against the police was trying to reaffirm. As someone who had no clue about this historical event prior to watching Alex Wheatle, the production does a great job making the circumstances surrounding this riot easily digestible without hindering the storytelling to make it "accessible" to newcomers like me. These on-screen characters should be living their lives, not providing exposition to confused moviegoers.

Save for one strange use of slow-motion straight out of that shot of a camera guy getting speared in Peter Jackson's King Kong (remember when that was what we all associated Jackson with instead of 48fps?), McQueen's filmmaking remains sublime in Alex Wheatle. An extended shot of Wheatle watching from an alleyway as one of his friends is brutalized by police is especially well-realized, particularly in the placement of the camera. Sure, Alex Wheatle sees McQueen adhering more to the formula of a genre rather than revamping it entirely as he did with prior Small Axe productions. But Alex Wheatle has enough memorable qualities to make its more familiar nature manageable.

Posted by Douglas Laman (NerdInTheBasement) at 10:33 AM