Jingle Jangle is an overstuffed but endearing Christmas movie 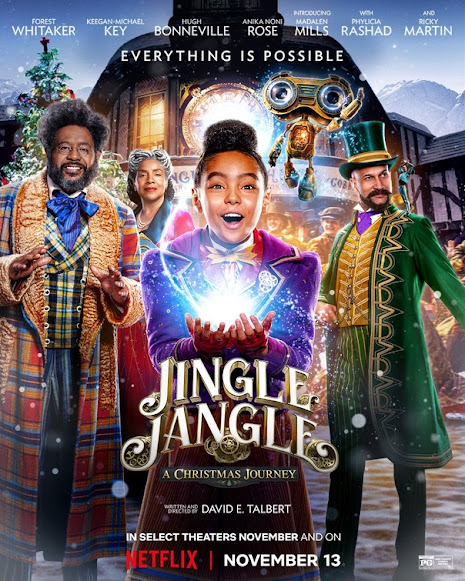 Will Netflix Christmas movies become annual staples like traditional movies? It's a question I hadn't pondered prior to writing the review of Jingle Jangle: A Christmas Journey, one of the many new Christmas movies dropping on Netflix in 2020. Traditionally, Christmas movies became ubiquitous staples of the holiday season because of how often they would run on broadcast networks or cable channels. In the last few decades, that's transitioned over into certain titles being watched constantly on home video. Being able to move between mediums like physical media and TV airings allowed these films to be seen far and wide. Netflix movies, meanwhile, never air anywhere besides Netflix and rarely get physical media releases. This restricts their presence in the Christmas pop culture landscape, will it also restrict how they endure in the years to come?

If any Netflix Christmas movie is going to end up being the next Elf or The Santa Clause, it's probably gonna be Jingle Jangle: A Christmas Journey. An original story that the current generation of kids can claim as their own, it's also something that could easily translate to a stage musical if Netflix chooses to go that way. God also knows it's got a bunch of characters practically tailor-made to be turned into popular toys. Oh, and it's also pretty fun, a key ingredient for any Christmas kids movie that doesn't end up gathering dust on the shelf like Fred Claus.

Written and directed by David E. Talbert, Jingle Jangle concerns toy inventor Jeronicus (Forrest Whitaker), who was once the Mr. Magorium of the early 20th century with his lively toy store. But once his apprentice, Gustafson (Keegan Michael-Key), ran off with his book full of toy plans, things went south for Jeronicus. Gustafson got rich off of all those plans and Jeronicus fell into financial ruin and lost his wife. Growing distant with his daughter, Jessica (Anika Noni Rose), Jeronicus now lives as a hermit in the ruins of his toy store. But the arrival of his granddaughter, Journey (Madalen Mills), could help shake Jeronicus out of his stupor. just in time to stop Gustafson from stealing the Buddy 3000, a plucky robot once created by Jeronicus.

Talbert's script is bursting with imagination, sometimes to its own detriment. This isn't just a Christmas musical, it's also a story about father reconnecting with his family. It's also a movie where mathematics is rendered as Doctor Strange-esque magic tied into emotions ("The square root of imagination!"), there's a tiny robot that looks like the offspring of Johnny 5 and Roberto from Futurama, Jeronicus has to deal with the advances of postwoman Ms. Johnston (Lisa Davina Phillip). There's a lot going on in here and Jingle Jangle does suffer from being so overstuffed. Emotional moments, in particular, don't quite land like they should simply because they get lost in the middle of all the hustle and bustle.

That having been said, it is neat to see a modern live-action family movie that's concerned with delivering a lot of new stuff rather than just rehashing old animated Disney movies. The fact that Talbert is delivering everything without a hint of cynicism is also welcome. For example, there isn't a single wink to the camera or jaded one-liner when it comes to Jingle Jangle's merging of mathematics and emotions. It's a strange concept but one that works in the film's confidently fairy-tale-esque style.  To boot, no pop culture references or bathroom humor emerge here, two of the laziest crutches of any kids movie.

Plus, even when Jingle Jangle becomes too overstuffed for its own good, it's at least gorgeous to look at. The costume designs, especially, are radiant-looking, all bursting with color and grandiose touches, like Gustafson's scepter that just screams "villain". The assorted sets are also well-realized and help to lend a tangible quality to the movies whimsy. Uses of CGI are less successful, particularly anytime they transition between the practical puppet version of The Buddy 3000 and his CGI stunt double. The practical version just has such palpable weight to it that makes it feel so real. The distractingly weightless CGI version of the same character, by contrast, just reminds you that you're watching digital VFX trickery.

And then there are the musical numbers, which sometimes suffer from Talbert's inability to just let audiences watch these set pieces in an uninterrupted fashion. Awkward cuts are an unfortunate side effect in a number of these tunes and negatively reminded me of the worst instances of how Rob Marshall and Bill Condon have directed musical numbers. But the best of these musical numbers have more cohesive filmmaking that allows audiences to appreciate all the visual polish and fun of these proceedings. Opening tune This Day, especially, is a great earworm that kicks things off on an energetic high note. Also, Keegan Michael-Key is actually doing really good work in musicals in the last two months of 2020, I wouldn't mind one bit if he just decides to become a fixture of movie musicals!

Jingle Jangle is a give-and-take kind of movie. It gives you great costume work, but it takes you out of the movie with awkward uses of CGI. It gives you some lively musical numbers but takes you out of the movie with clumsy editing and direction. You get the idea. But enough of what it gives is successful and endearingly sincere enough to make it a pleasant Yuletide distraction. Best of all, I have a hunch it will become a favorite among kids. The thought of them having their own original Christmas movie to cherish like I had with Elf as a kid is really nifty. Only time will tell if Netflix Christmas movies are able to become enduring holiday season staples. But if any of them could, Jingle Jangle: A Christmas Journey seems like the most likely candidate.

Posted by Douglas Laman (NerdInTheBasement) at 11:22 AM