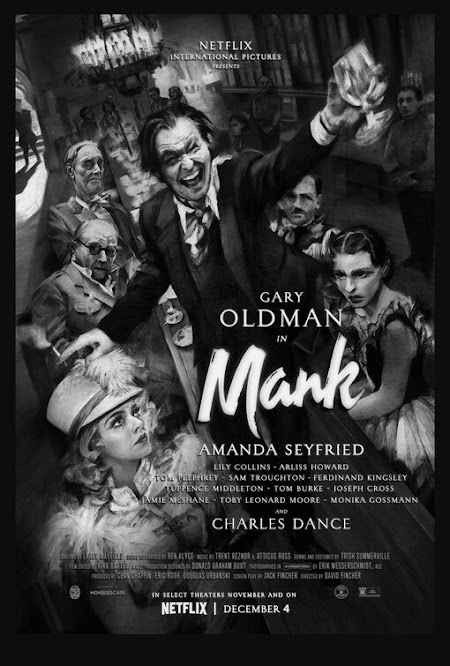 In some ways, Mank isn't all that revelatory of a film. It's yet another historical drama starring a white guy who acts like a heel (particularly towards women) yet the audience is supposed to find his behavior endearing. It's also another example of modern filmmakers examining classic periods of Hollywood filmmaking and focusing exclusively on White dudes. Funny how we keep going back to classic Hollywood stories yet they never star Oscar Micheaux or Alice Guy-Blaché. However, if anyone could make the familiar approach and ideas of Mank work, it's director David Fincher and the cast & crew he's assembled here. Against my better nature and the shortcomings of the production, Mank managed to win me over despite its familiar tendencies.

So who is Mank? Well, he's Herman J. Mankiewicz (Gary Oldman), a screenwriter who worked all throughout Hollywood in the 1930s. He's also the man who, as Mank begins, has been tasked with writing the screenplay for a film for Orson Welles (Tom Burke). Mank's new passion project in between consuming copious amounts of liquor will eventually become Citizen Kane. Taking a cue from the non-linear structure of Citizen Kane, Mank engages in frequent digressions into the past to explore what informed Mank's ideas for Citizen Kane. In particular, these sequences set in the past explore Mank's relationship to William Randolph Hearst (Charles Dance), a wealthy man who basically controls the film industry and so much of California.

If you don't know who Hearst is from David O. Selznick, I'm not sure how much enjoyment you'll wring out of Mank. Jack Fincher's screenplay makes no attempts to help out audiences who may be unfamiliar with these figures or their world. In its weakest moments, Mank, much like Once Upon a Time in Hollywood, feels like showy name-dropping without much of a purpose. Thankfully, also much like with Hollywood, those aren't the only moments of note in Mank. Much of the films does manage to create its own identity apart from references to figures in older eras of Hollywood. In this case, Mank crafts its own identity by functioning as a fascinating exercise in ripping off the rainbow-colored vision people have of the "good o'l days" of Hollywood.

In a welcome surprise, Mank is no empty nostalgia trip. The Hollywood Mankiewicz inhabits is one of deceit. People struggle for work, studio executives openly talk about screwing over customers ("We work in the only business where we still own the item after the customer purchases it") and Mank views anything that goes on in this town with a sideways glance of skepticism. How does this system endure? Well, Mank's smartest concept is showing how it all thrives not on active villainy but laidback acceptance of the status quo. At one point, Mank talks to a studio executive who recalls that, as a child, he was physically tormented for handing out fliers promoting a  socialist candidate. "I didn't make the rules of politics," the executive notes. "I just live by them." In the world of Mank, the people with all the power aren't the only problem. Those who just go along with everything out of their own self-interest are just as much of an issue. Mank paints an outright bleak portrait of this era of Hollywood, right down to its portrayal of Marion Davies (Amanda Seyfried) as someone all-too-aware of her status as arm candy for Hearst.

The unexpectedly grim atmosphere of Mank caught me totally by surprise but it turned out to be one of my favorite parts of the whole movie. Going this route ensures that Mank has more to offer than trivia about 1930s Hollywood and parallels to Citizen Kane. Also helping to make Mank work as well as it does is the visual look of the movie. Brought to life through Fincher and cinematographer Erik Messerschmidt, a meticulous level of detail informs nearly every frame of the enterprise. In the hands of these two gentlemen, Mank is such a handsome looking affair that had me constantly impressed with its blocking, staging, and especially the evocative use of black-and-white coloring.

The film also gets bonus points for subtly incorporating all the restrictions of filming a movie in the 1940s. If a piece of camerawork couldn't be accomplished in this era, Mank avoids utilizing it. If Mank was being made in 1942, it would likely look remarkably similar. In its visuals, one finds the best example of Mank's adherence to the past. While clearly leaning on visual traits of early 20th-century filmmaking, you don't need to be an expert or even all that knowledgeable of this style of filmmaking to be wowed by the imagery Fincher and Messerschmidt deliver. Mank looks so impressive that it'll serve as great eye candy for all.

Filtering through the prism of 1940s filmmaking informs the majority of Mank, including another great film score by Trent Reznor and Atticus Ross. Though they've delivered sublime work with Fincher on multiple occasions prior, Reznor and Ross don't just rehash the past with their score for Mank. Bound to just instruments that existed in the 1940s, their compositions, many of them short bursts of music, find unexpected ways to enhance the ominous atmosphere of the story. Tracks like The Organ Grinder impressively combine tubas, wind instruments, and even xylophones to instill a sense of unshakable uncertainty in the viewer.

The level of quality seen in the tone, visuals, and score of Mank is further reflected in other standout elements like a barrage of memorably snappy dialogue exchanges (very reminiscent of classic Hollywood fare like His Girl Friday) and an unforgettable supporting performance from Amanda Seyfried. Conceptually, Mank covers a lot of familiar storytelling territories and it's easy to imagine this extremely long and insular exercise not being everyone's cup of tea. But for me, a fan of both well-executed bleak tones and old movies, Mank just hit all the right buttons. It's not rewriting the book on biopics regarding either classic Hollywood or troubled white dudes. However, Mank does end up having its fair share of revelatory qualities that'll make you glad David Fincher is back directing movies again.