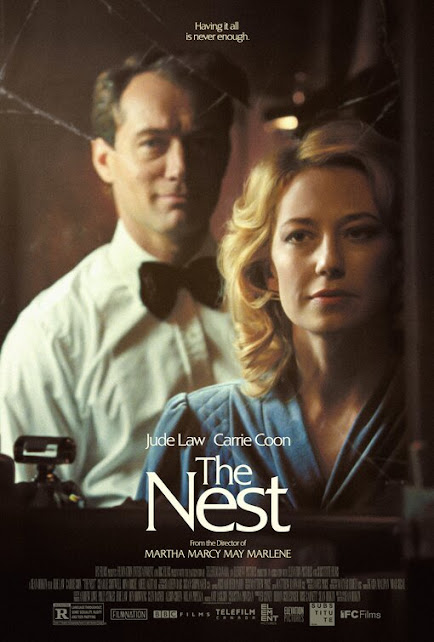 In his first directorial effort since the 2011 movie Martha Marcy May Marlene, director Sean Durkin has made The Nest, which explores a married couple slowly crumbling as they move into a new home. It's the kind of storytelling that defines escapist entertainment! All joking aside, Durkin's newest feature is a great example of a quiet drama that can still leave a memorable impact. At times, the production, which features several big emotional scenes framed in extended single-takes, carries all the emotional immediacy of the best live plays. It's not going to be for everyone but I'll be darned if this subdued production didn't grip me.

In a New York suburb, Rory O'Hara (Jude Law) and his wife, Allison (Carrie Coon), carry out a reasonably pleasing existence with their two kids. Rory works as a trader while Allison teaches people horseback riding. But Rory is fearful about his future employment opportunities in America. It takes some convincing, but Rory coerces Allison and the kids to move to his home country of England. Now residing in an old mansion in Surrey, Rory is trying to make it big at his firm while Allison and the kids adjust to an unfamiliar land. There are always growing pains when you move somewhere new. But for this family, the turmoil will prove especially challenging.

My favorite quality about Durkin's screenplay is how it well it juggles instilling an ominous tone without making it obvious where The Nest is headed. At first, all the struggles the central family faces feel like normal issues anyone would face going to a new home. Even Rory's initially promising desire to get his boss, Arthur (Michael Culkin) to sell his business to a Chicago bidder looks like it might go someplace. But gradually, Durkin peels back a new layer of displeasure in these characters that keeps chipping away at their new life. All the while, both Durkin's writing and directing make sure The Nest isn't just a whole lot of build-up to inevitable trouble.

Instead, it's a portrait of a family crumbling in front of our very eyes as they each respond to their own dire circumstances. Rory, for example, retreats into being a pathological liar. Whether he's schmoozing clients at fancy parties by acting like he owns multiple homes or lying about his finances to Allison, Rory lives under the idea that if you keep repeating a lie enough, it'll automatically become the truth. Allison, meanwhile, runs in the opposite direction, embracing brutal reality like an old friend. An early scene where she speeds along the highway while the radio blares, a cigarette lies in her fingers and a haunted expression lingers on her eyes cements how Allison is always staring at the world as it is.

Durking delicately unwraps these individual personalities and then creates such compelling drama in challenging them. This goal is executed through Durkin's decision to frame much of The Nest through single-takes captured in wide shots that instill a sense of coldness into the movie. There's as much physically emptiness in each individual frame as there is internal emptiness in the characters of The Nest. Best of all, this filmmaking style ends up working as immersive rather than gimmick. Throughout The Nest, I got wrapped up in the conversations between characters and the mood of certain scenes rather than being distracted by Durkin framing things without any cuts.

Of course, how could not get absorbed by a pair of superb lead performances from Jude Law and Carrie Coon? After spending a couple of years delivering supporting turns in a series of big blockbusters, it's great to see Law in more grounded acting territory again, complete with a role that makes great use of his movie star looks and charisma. Rory can talk and look like a guy who knows how to do anything, but Law does great work in depicting the messier, vulnerable and angrier sides of the character. Meanwhile, after acing so many supporting film roles, it's great to see Coon nail a lead role like Allison, she captures the characters haunted nature with such devastating clarity.

Though its restrained nature and relentlessly grim tone won't be to everyone's tastes, The Nest certainly worked for. The lead performances are both so thought-provoking while Sean Durkin's commitment to both the gradual unraveling of a family and a unique filmmaking style left me thoroughly impressed.