Promising Young Woman is as thoroughly impressive as it is bold 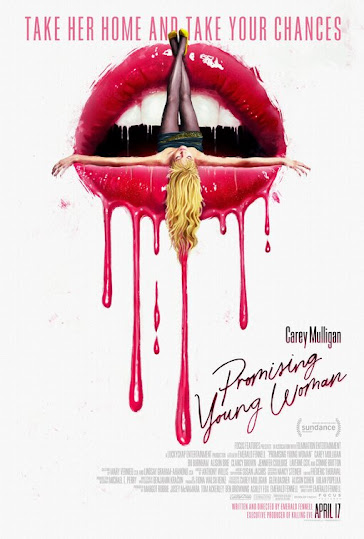 CW: Discussions of sexual assault
As Promising Young Woman begins, we meet Cassie Thomas (Carey Mulligan) slumped over in a booth at a bar, seemingly heavily intoxicated. A trio of men notices her, with two of the guys immediately hurling insulting remarks her way. One member of the group goes over to help her and ends up, against her wishes, taking her home. As they sit on his bed, the guy begins to force himself on top of Cassie...just as she reveals she's not intoxicated at all. This opening establishes a number of critical details regarding Promising Young Woman. The way it establishes that predators can be anywhere. Carey Mulligan's fearless lead performance. Best of all, it cements that what you're about to see is something that has gusto to spare and will keep you glued to the edge of your seat.

From this opening, we soon learn more about Cassie, a thirty-year-old working in a coffee shop. She spends her nights pretending to be intoxicated at bars so that she can intimidate the guys who try to assault her. Everything about her current life stems from her abrupt drop-out of medical school five years prior, which coincided with a tragedy involving sexual assault at her school. While the guys accused of this act have been able to move on and secure fiancees, Cassie is still tormented by the past. Now, she's beginning to execute a plan of revenge for the past just as hope for the future emerges through a new relationship with former classmate Ryan (Bo Burnham).

It's already been said that Promising Young Woman is a bit of a Drive-scenario, where the marketing is selling one movie while the actual film is something else entirely. That turns out to be a bit true since Promising Young Woman's marketing couldn't convey how much of this film centers around the psychological trauma Cassie is dealing with. Cassie isn't depicted as "crazy" so much as she's stuck in a society where closure for her trauma is impossible. Everyone else just wants to sweep under the rug the horrors that keep her up at night. It's important to maintain the reputations of college-aged boys, not offer support for women in distress.

These rules of reality provide the impetus for Cassie's new double-life and her inability to move on to the future. Writer/director Emerald Fennell does exceptional work rendering the complexities of Cassie's psychology. I especially love how her exploration so thoroughly challenges the viewer as to how they should be feeling about what they're seeing on-screen. Should we be thrilled at Cassie becoming a quasi-vigilante? Should we be distressed that this is the lengths people have to go to in a society that dismisses the humanity of sexual assault survivors? It's all so messy, but appropriately so. Nobody surviving extreme trauma comes out with a tidy psyche and Cassie is no different.

Through the exploration of Cassie as a character, we see how well Promising Young Woman keeps the viewer on their toes. This is further reflected in the clever casting, which is primarily filled out by actors playing against type. Comedic actor Molly Shannon, for instance, gets a one-scene appearance as a grieving mother. Meanwhile, fellow comic performers Christoper Mintz-Plasse and Allison Brie get to play antagonistic figures embodying the systemic misogyny Cassie is being crushed under. Best of all in this style of casting is Jennifer Coolidge and Clancy Brown as Cassie's parents. Who knew Brown could channel the soft-spoken dad routine so well? He evokes Tracy Letts in Lady Bird here and it's such an unexpected but welcome turn from the guy.

Of course, it's impossible to talk about the cast of Promising Young Woman without bringing up Carey Mulligan. The whole movie revolves around her turn as Cassie and she proves to be more than up for the challenge. Mulligan's experience with capturing interior anguish in films like Brothers and Wildlife means she's more than prepared to tackle all the pent-up horrors stirring up inside Cassie. But her handling of dark comedy, an area we haven't seen her explore much before, proves especially impressive here. Her glib line delivered excellently reflected the detached nature of Cassie. To boot, Mulligan gives Cassie a constant air of unpredictability that always puts you on edge. It's like even Mulligan isn't 100% sure what this character is capable of and it makes for a livewire of a performance.

The unique tone and performances of Promising Young Woman are paired up with sharply-detailed visuals. Fennell and cinematographer Benjamin Kračun keep coming up with, among other visual feats, such interesting pieces of staging throughout the runtime. An exchange between Cassie and a remorseful lawyer (Alfred Molina) doesn't settle for stagnant medium-shot/reverse-medium-shot framing. Wider shots are employed for the two characters that situate them each at the bottom of the frame with a vast amount of space hovering above them. This emptiness reflects the horrors of the past weighing on the heads of both of these characters. To boot, starting their dialogue in this style makes it palpable when the camera shifts to more cramped shots for the later more intense parts of their conversation.

The clear layers of thought put into Promising Young Woman's visuals extend onto the use of bright colors (Cassie's fingernails that each have their own vibrant hue is a great touch) and the different outfits Cassie wears out to her nighttime bar trips. Promising Young Woman gives one so much to contemplate on every level, including in its bravura ending that pulls a Trojan Horse in sneaking a haunting ending into a seemingly upbeat conclusion. A boldly-realized concoction, all the creative promise apparent in Promising Young Woman's opening scene endures right until the credits begin to roll.