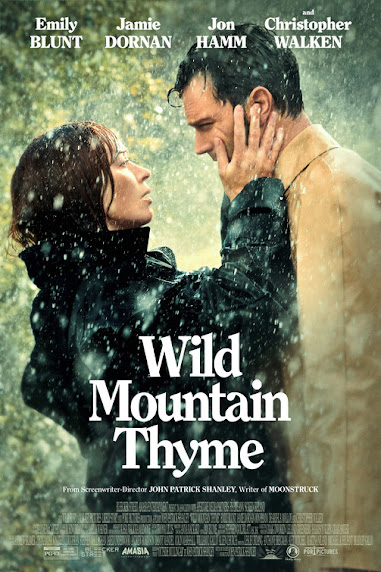 They say there aren't any innovations in cinema anymore. Everything that can be done in this medium has been done. I don't believe that. I strictly believe that as long as film exists, artists will find new ways to innovate it as much as trailblazers like Oscar Micheaux and Lynne Ramsey have in the past. It can be hard to think like that in 2020, a year where blows to the film industry are as common as racist cops. But within Wild Mountain Thyme, one can see hope. Writer/director John Patrick Shanley has broken new ground here by making the first-ever cinematic distillation of melatonin. Who knew this herb could be translated into a cinematic form so easily? Not since How It's Made has a piece of pop culture been seemingly engineered to put viewers to sleep.

Wild Mountain Thyme takes place in Ireland and follows a pair of neighbors, each of whom resides on a large piece of farmland. Rosemary Muldoon (Emily Blunt) is the stubborn horse-wrangler who loves doing things independently almost as much as she loves smoking cigarettes. Then there's Anthony Reilly (Jamie Dornan), who works hard on the farm owned by his father, Tony Reilly (Christopher Walken). Despite this, Tony isn't sure about giving his son this property when he dies. An American, Adam (Jon Hamm), might just be the one to take over the land and also win Muldoon's heart. Why can't Reilly commit to the woman who lives next door?

Shanley has had a prolific career as a writer, having been responsible for directing Doubt and writing Moonstruck. Unfortunately, his writing for Wild Mountain Thyme is more along the lines of his screenwriting for Congo and without that films saving grace of a lively ape sidekick to keep things interesting. For one thing, the decision to immerse Reilly in so much mystery as to why he can't commit to a relationship with Muldoon proves a poor one. The "Will they/Won't they?" dynamic between the two lead characters has nothing to build upon. There's Muldoon's yearning and then nothing on Reilly's end but constant rejections. How can one get invested in a character dynamic so thinly-developed?

Also proving to be a problem is Shanely's penchant for extremely old-fashioned dialogue. It's nice that Shanely didn't feel the need for jaded cynicism to intrude on a classical romantic yarn. It'd be even nicer if the dialogue was actually good. Early on, Muldoon openly tells a horse "When [Reilly] speaks like that, I can't help but fall in love with him," and it's all downhill from there. Attempts to do erotically-charged dialogue in one of Wild Mountain Thyme's final scenes only go even worse. It's hard to imagine any moviegoer reaching for a fan to cool themselves off when Emily Blunt reads off tin-eared dialogue like "Have you ever imagined what I look like with less clothes on?"

Tasked with bringing this dialogue to life is a talented crop of actors saddled with a poor script and even worse Irish accents. The best thing one can say about the accents in Wild Mountain Thyme is that they make one further appreciate how Chernobyl and A Beautiful Day in the Neighborhood emphasized engaging characters rather than fully accurate accents. Christopher Walken is an absolutely fantastic actor and even he can't make an Irish accent work. A pivotal father/son scene between Anthony and Tony meant to drum up tears is rendered unintentionally hysterical because of how Irish Walken trying to sound sad just makes him sound like Grover from Sesame Street.

On top of everything else, the production is so unimaginatively staged that all the individual flaws don't even add up to an entertaining catastrophe. The uninspired direction and cinematography ensure that Wild Mountain Thyme is mostly a snoozefest...except for the ending. The eventual reveal of what's been plaguing Anthony is an utterly bizarre moment that simultaneously evokes Eugène Ionesco and Bee Movie. It's not worth slogging through the whole movie just for that bit of unexpected lunacy. But if more of Wild Mountain Thyme had been this brazenly strange, it would be worth seeking out. As it is, it's merely a boring movie that clearly didn't have any of the luck of the Irish on its side.