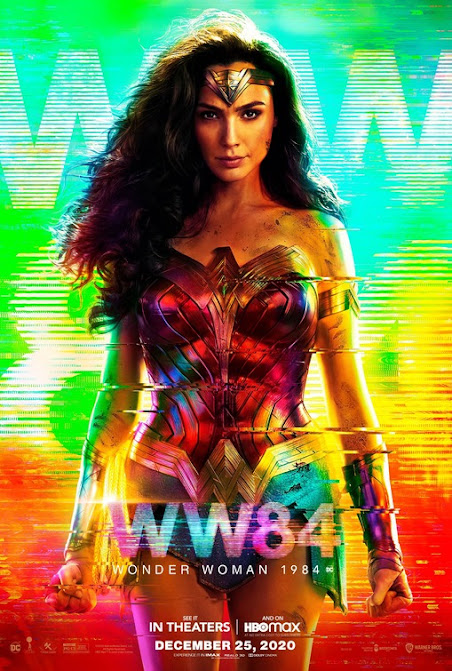 Wonder Woman 1984 leaves you with a lot of questions. Unfortunately, they're not the kind of questions superhero movies should inspire, like "When can I see it again?" Instead, I was left puzzling some of the outright baffling choices writer/director Patty Jenkins and her fellow screenwriters Geoff Johns and David Callaham made here. For instance, why set the film in 1984 and not utilize the time period? Why did you use John Murphy's Sunshine (Adagio in D Minor) from Sunshine in a scene? Where did all the imaginative set pieces go? Why can't we spend more time on the island of Themyscira? Most of all, what went wrong here?

Set in 1984 (surprise surprise), Wonder Woman 1984 picks up with Wonder Woman, in the guise of her alter-ego Diana Prince, working in a museum in Washington D.C. alongside colleague Barbara Minerva (Kristen Wiig). One day, Prince's workplace uncovers a stone that has an incredible ability to grant wishes. This intrigues wanna be tycoon Maxwell Lord (Pedro Pascal) as well as social outcast Minerva. Heck, even Prince has some wishes of her own that end up bringing back Steve Trevor (Chris Pine) from the dead. But as the wishes pile up, the world begins to turn into a chaotic mess. To fix it all would take the strength of Wonder Woman...and even she may not be up to the task.

Wonder Woman 1984 starts out with the titular superhero foiling a bank robbery in a shopping mall, a task that entails saving the lives of two young girls. The light-heartedness of this sequence and the bright visual aesthetic immediately establish that WW1984 is going for an old-school approach to superhero storytelling. This is a superhero movie where costumed crusaders save cats from trees, not ask each other if they bleed. That's all well and good by me, especially since two of the best superhero movie directors of all-time, Sam Raimi and Richard Donner, based their superhero movies on this very style.

Unfortunately, WW1984 writer/director Patty Jenkins is missing a crucial element that made Raimi and Donner's light-hearted superhero fare work: a love for everyday people. In Superman II and Spider-Man 2, everyday people are just as heroic as the superhero. The citizens of Metropolis will rush in to stop General Zod when Superman is down for the count while subway passengers will lay down their lives to prevent Doc Ock from reaching Spider-Man. There's a hopeful optimism there that Wonder Woman 1984 lacks. In this movie, everyday people are either objects to be saved or beings prone to being evil and falling apart unless Wonder Woman steps in to corral them.

There's no personality to these people, they're barely above being props. Part of the problem is that Wonder Woman 1984 wants to channel this lighthearted aesthetic while also commenting on the "Greed is good" style of excess in the 1980s. "Life is good...but it can be better!" goes Maxwell Lord's mantra on TV and it's one most everyday people in WW1984 abide by.  So the film wants to be a bleak social commentary on human behavior in the 1980s like a classic Paul Verhoeven movie...while also channeling the original Superman movies. That's just not a mixture that works. As a result, social commentary lacks punch.

This is one of many baffling choices in the film, which also include the decision to have Kristen Wiig modulate her performance like one of her SNL characters, right down to the way she delivers dialogue. Wiig has proven her dramatic chops in The Diary of a Teenage Girl and The Skeleton Twins, why is she performing a leftover SNL routine? Worse still, her character turns out to be superfluous to the plot. Another puzzling storytelling move lies in the decision to hold off on the action sequences for nearly an hour after Wonder Woman foils that bank robbery. Tired gags about Steve Trevor encountering 1980's culture for the first time aren't entertaining enough to make one realize this action movie is sorely lacking in thrills.

Without much in the way of thrills, a dynamic plot, or even impressive visual effects (the CGI stunt doubles for human characters laughably bad in some instances), what does Wonder Woman 1984 have to offer? Well, a good Pedro Pascal performance for one. After delivering a restrained vocal-heavy performance on The Mandalorian, Pascal is apparently having a ball going over-the-top channeling fun campy comic book villains like Jack Nicholson as Joker with his own turn as Maxwell Lord. Gal Gadot doesn't have much of a character arc to work with this go-around. But she still makes for an engaging on-screen presence. Plus, both of Wonder Woman's costumes, including a new golden eagle armor, look well-realized.

Perhaps best of all, at least Wonder Woman 1984 opts to go for a slightly different than usual comic book movie climax, one that forgoes blue sky beams and gigantic CGI baddies for something a little more personal. It's still a messy finale that suffers from the film's detached approach to everyday people, but conceptually, it's at least something different from the norm. Hans Zimmer is also doing fine work in the score department, but it's all in the service of a movie that's more empty than dazzling. In the end, the best decision Wonder Woman 1984 ever made was getting released on Christmas Day since the movie will leave you like the Grinch on Christmas morning; puzzling and puzzling until your puzzler is sore.