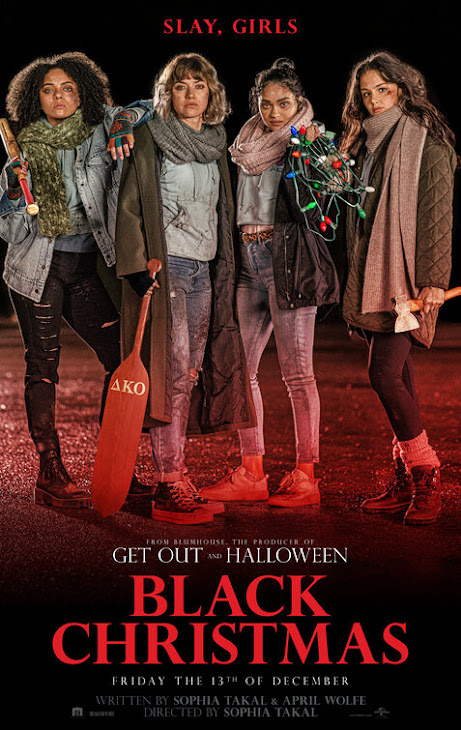 Back in the 2000s, every classic horror movie from the 1970s and 1980s was getting a remake. The success of the 2003 Texas Chainsaw Massacre had spurred on a wave of movies trying to cash in on familiar brand names for easy money. Among these remakes was the 2006 Black Christmas movie, a remake of the 1974 Bob Clark movie of the same name. While the original Black Christmas is widely held up as a classic, the 2006 Black Christmas was largely forgotten within a few days of its release. Well, now that the 2018 Halloween movie has reminded Hollywood how valuable famous horror movies can be, another Black Christmas remake from director Sophia Takal was snuck under the tree last December.

A very very loose remake of the original movie, Black Christmas concerns Riley Stone (Imogen Poots) a student whose a part of the Mu Kappa Epsilon sorority. Stone has a close bond with her fellow sisters in this sorority, which includes Kris Waterson (Aleyse Shannon), and that bond has become all the more important after Stone was raped by the leader of the fraternity Delta Kappa Omicron. As Winter Break approaches, members of MKE begin getting slaughtered by a cloaked figure. Though she think they've merely vanished, April begins to get worried, especially since the disappearing students seem to tie into the DKO fraternity. It won't be a very merry Christmas for anyone if Riley and her friends don't figure out what's going on.

Screenwriters Takal and April Wolfe have gone the smartest route for a horror remake with Black Christmas.  They've decided to basically make their own original movie and just slap a familiar name on it. I'm curious why microbudget horror outfit Blumhouse needs even a familiar name if the movies are gonna be so cheap to produce, won't they be profitable even without a recognizable title? Still, Blumhouse wanted a Black Christmas remake and Takal and Wolfe have opted to use that opportunity to provide something new. To boot, it's a project that humanizes a survivor of sexual assault, a welcome reprieve from how often slasher movies handle anything related to women and sexuality.

The various scary scenes are also appropriately chilling, particularly one scene executed through one single-take following a girl walking around the sorority house along searching for the source of an odd noise. It's a very well-composed scene that gets a lot of tension out of the knowledge that, inevitably, blood's gonna spill...but when? Plus, Takal and Wolfe do a good job of getting a lot of the scares from grounded places. Sudden unexpected manifestations of toxic masculinity, like a sudden outburst from the boyfriend of one of Riley's sorority sisters, are just as frightening as a masked guy with a knife. Ditto the looming presence of a college professor (played by Cary Elwes) who casually paints himself as a martyr at the hands of marginalized groups.

If there's one thing really holding Black Christmas back, it's the puzzling choice to make it PG-13. Considering the college-aged protagonists are way older than the minimum age to get into an R-rated movie and that slasher movies aren't usually PG-13, it's puzzling Black Christmas went for this MPAA rating. But it did and it was clearly a post-production decision given how the films editing clumsily walks around showing anything graphic. When they do this with the early kills of the sorority girls, it kind of makes sense. We're supposed to sympathize with Riley and her friends, not revel in the gruesomeness of their murders.

But when Black Christmas starts awkwardly cutting away from male villains getting run over or set on fire, then it becomes apparent that Black Christmas is just avoiding any of the nasty violence that any slasher movie needs to deliver. The decision to trim things down for a PG-13 has hurt Black Christmas, but luckily, its bold creative tendencies incorporate a decent amount of thrills into the proceedings. It's not the greatest or most consistent horror movie remake out there, but more of these movies could stand to take a cue from Sophia Takal's take on Black Christmas. Swing for the fences, don't just rehash what previous movies did, and if you need to write a cutting rendition of Up On The Housetop, call up Riki Lindhome to pen the lyrics.