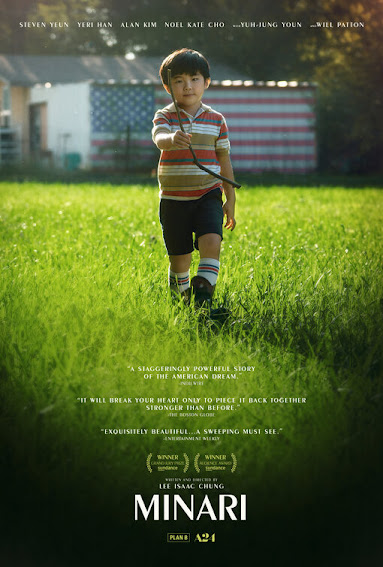 Throughout Minari, director Lee Isaac Chung employs a visual motif that just knocked me on my feet every time. The motif consists of Chung cutting to a shot of something like a dresser, a building, or two characters talking. Then, the next shot reveals that we've been watching things from the perspective of a character, usually that of young child David (Alan Kim). It's such a masterful way of immersing the viewer into the world of Minari without us even realizing it. To boot, Chung's restrained sensibilities as a filmmaker means he keeps deploying it sparingly enough that it doesn't become predictable. It's just one of many ingenious decisions Chung has made here.

The Yi family, father Jacob (Steven Yeun), mother Monica (Han Ye-ri), and their kids David and Anne (Noel Kate Chao) have moved to a small remote home in Arkansas. It's an unusual destination that takes the family far from their previous home in California. However, David is convinced that this is the perfect place to raise a fortune for his family through farming. As the families encounter all kinds of difficulties in their lives, Monica calls in her mom from South Korea, Soon-ja (Young Yuh-jung), to help take care of things. David is not a fan of Soon-ja, though this grandmother is a fiery spirit and she's not going to be brought down by just a precocious youngster.

A sense of melancholy permeates Minari, a quality made apparent in an early scene set at a poultry factory. David inquires to his father what a chimney constantly spewing smoke is for. That, Jacob explains, is where they dump male chicks, since they're unable to produce eggs and, thus, useless to the company. "We must be useful," Jacob informs his son. This desire to be useful to his family above all else drives all of Jacob's actions and it isn't long before it takes on a quietly tragic quality. Jacob is never an abusive father and it's easy to see why he's so committed to making money. But as Minari goes on, it's also clear that he's losing sight of what's important.

This is an example, alongside David's heart condition, of the quiet challenges that motivate the characters of Minari. But fear not, it isn't all doom and gloom here. One of Chung's most impressive feats in his script for Minari is the balance between subdued sorrow and touching moments of kindness. The first time we meet Jacob's farmhand Paul (Will Patton), for instance, the character emanates such genuine warmth ("Y'know, the first time I saw you, I knew we were going to be friends!"). Ditto for Soon-ja, whose constant patience for David despite all of his misbehavior is thoroughly heartwarming. She's especially great at exuding a calming presence in a scene where she reassures David that he doesn't need to worry about Hell yet.

There's a sense of tonal balance in Chung's writing that reflects how real-life rarely delivers one singular mood. Moments of joy can so easily turn into tragic events in the blink of an eye. Minari manifests this aspect of reality so beautifully while the character of Soon-ja similarly radiates authenticity. An elderly woman obsessed with drinking Mountain Dew and watching boxing matches, Soon-ja could have easily been another caricature of an "extreme" grandmother. Instead, Chung's filmmaking and Yuh-jung's performance both treat her unorthodox traits with a matter-of-fact quality that makes the character feel so believable. Of course, one can also attribute this level of believability to how Minari is an autobiographical venture, which certainly explains the richly unique details that littler the script.

Soon-ja and the other characters in Minari are filmed through crisp camerawork courtesy of director Lee Isaac Chung and cinematographer Lachlan Milne. This whole movie looks so striking, especially in regards to the colors seen in bright exterior scenes. The way Chung and Milne capture the vivid green grass and blue sky dancing across Jacob's farmland, we can immediately see why David is so attracted to this space. Ditto for the riverside Minari garden Soon-ja grows, which looks like something out of a painting. Meanwhile, there's a controlled quality to how interior scenes are filmed. The minimal amount of space in the Yin family's home is always apparent, but it can be used for such drastically different purposes. Sometimes, the domicile carries a cozy quality but then Chung and Milne can so gracefully make it feel claustrophobic on a dime.

Truthfully, every detail of Minari left me impressed and not just on a visual level. The screenplay, Emile Mosseri's ethereal score, and the performances! From Steven Yeun's richly detailed lead turn to Young Yuh-jung's fascinating supporting performance, Minari is packed with unforgettable performances. And while I know it's trite to say this in movie reviews, I will say Minari did feel like such an unintentionally relevant movie to 2020. Lee Isaac Chung's incredible movie reminds us all that tragedy is inevitable in life and we'll rarely walk away from it unscarred. But with ones we love to hold onto tightly, maybe we can hold on and find ways to endure.