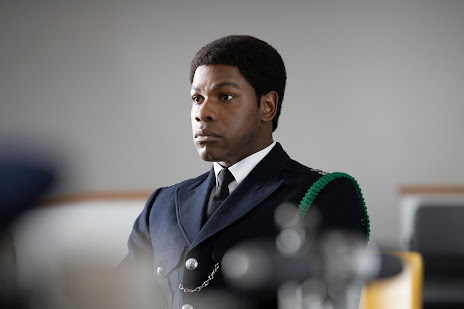 I never got to see Attack the Block until last year. However, I'll never forget watching its trailer when it first came out and being so enamored with it. The project looked so fun, so unique, so gnarly. Best of all, the glimpses of Attack the Block leading man John Boyega in it utterly captivated me. In just a trailer, Boyega conveyed such charisma and talent. I was immediately fixated on this guy and hoped he would be destined for great things. Well, after getting to headline a trilogy of Star Wars, Boyega is doing a light for himself. However, after he appeared in a pair of movies with more green than actual humanity, it's unspeakably great to see Boyega back to acting in down-to-Earth movies like Red, White and Blue again.

The third installment in director Steve McQueen's Small Axe collection, Red, White and Blue chronicles the true story of Leroy Logan (John Boyega). After earning a degree in Biology in the early 1980s, it seemed like Logan was headed for a career in a lab. However, he decided to instead pursue a career as a law enforcement officer. Seeing the struggles between minority communities and cops, Logan carried a desire to help instill reform in the local police from within. It's a noble goal that proved far more difficult than he could ever imagine. Everywhere Logan turns, there's a new challenge in front of him, particularly from his predominately white colleagues in the world of policing.

Screenwriters McQueen and Courttia Newland pull off quite the impressive storytelling feat with Red, White and Blue. On the one hand, this is an intimate portrait of Leroy Logan's journey into the belly of the beast of British society. On the other hand, the project also offers up plenty of time for differing perspectives on the role police play in society. McQueen and Newland make the smart choice to fill up the differing perspectives almost entirely with ordinary citizens. Only Leroy Logan and fellow police officer of color Asif Kamali (Assad Zaman) are the only cops whose points-of-view are explored in-depth.

Red, White and Blue is concerned with the people whose lives are adversely impacted by cops, not the perspectives already dominating pop culture through shows like NCIS. These varying perspectives are vividly-realized even if they only show up briefly in the runtime. The perspective of Logan's dad, Ken (Steve Toussaint), is especially well-realized. After getting beaten at the hands of cops simply for the color of his skin early on, Ken reacts with anger at the idea of his son becoming a cop. Red, White and Blue lends empathy to both Logan and Ken's viewpoints. Through understanding the factors informing their decisions, the tragedy of their increasingly distant relationship becomes only more potent.

The writing in Red, White and Blue is just as sharp as McQueen's filmmaking. Across these Small Axe projects, I continue to be impressed with the creativity in how and where McQueen employs his camera. Logan and Ken's farewell before the former character attends police training, for instance, is filmed from a distance inside Ken's car. This subtly serves as a signifier of how, even a moment of tenderness, there exists such a distance between the two characters. Then there's the haunting scene where Logan comes across racist graffiti on his locker. McQueen captures this moment in a single take filmed in a profile shot position.

This means our gaze is entirely on Logan's reaction to the graffiti and the dismissive comments from his peers. Through just this shot, McQueen's direction epitomizes how these Small Axe films are supposed to emphasize the human beings affected by bigotry rather than just lingering on the bigotry itself. This masterfully-executed scene is also one of many great showcases for Boyega's chops as an actor found throughout Red, White and Blue. Boyega handles the swirling vortex of conflicted emotions inside Leroy Logan with such effortlessness and his depiction of the characters growing sense of frustration is especially well-realized. Boyega displays the kind of acting chops that made him so eye-catching in that Attack the Block teaser from a decade ago.