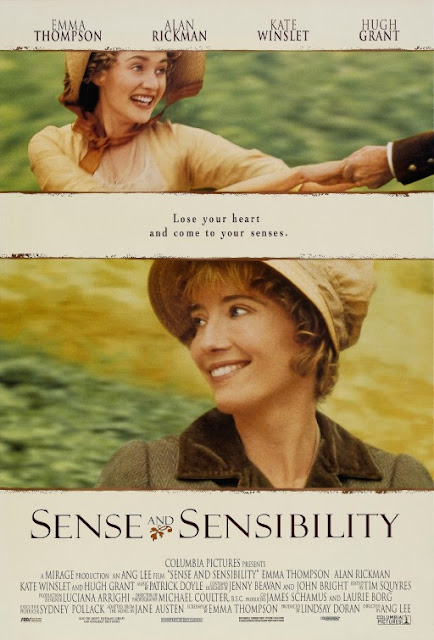 Ang Lee is not content to do just one type of movie. The filmography of this Oscar-winning filmmaker spans all kinds of movies inhabiting a variety of genres and exploring different scopes of storytelling. Sometimes he goes small and intimate, other times he does sweeping visual effects heavy allegorical exercises and other times still he does a Marvel Comics superhero movie that explores the long-term effects of parental abuse. Ang Lee goes in such bold directions as a filmmaker that even a more lackluster film like Billy Lynn's Long Halftime Walk has individual elements one can admire. No wonder then that pairing this kind of filmmaker with a collection of top-notch British actors and one of the most acclaimed works by Jane Austen resulted in a truly special film.

Sense & Sensibility begins with the three Dashwood daughters experiencing a great tragedy. Their father has passed away, leaving the trio of girls, Elinor (Emma Thompson), Marianne (Kate Winslet) and Margaret, in a state of despair, though their lives continue to move on as they recover from this loss. This recovery includes Elinor trying her best to help her two younger siblings while some individual romances begin to blossom for the oldest two members of this trio. For Elinor, a relationship begins to develop an infatuation with Edward Ferrars (Hugh Grant) while Marianne finds herself in a bit of a love triangle between Colonel Brandon (Alan Rickman) and John Willoughby (Greg Wise).

All of these plotlines amount to a story that's primarily about exploring how different kinds of love between people can impact our lives for the better, particularly the love felt between the trio of Dashwood sisters that helps them be reminded that they're never alone even in their most sorrowful moments of grappling with their father's demise or the worst of their romantic woes. Emma Thompson's screenplay doesn't so much approach this theme as it does embrace it, this is a script with its heart on its sleeve as well as all over its wardrobe! There's so much sincerely expressed warmth extended towards these characters, especially our two leads Elinor and Marianne, that it's hard not to become enamored with them and their personal struggles before long.

All of that effective pathos is accompanied by a similarly successful executed sense of wit that turns out to be one of the best parts of Emma Thompson's screenplay. Preserving this crucial element of the works of Jane Austen, Sense & Sensibility has plenty of dialogue-driven moments of humor that find clever ways to utilize the unique syntax of this era to create comedic lines of dialogue that only this movie could possibly deliver. Thompson's script similarly succeeds in juggling a whole bunch of intersecting plot threads and love triangles without driving the whole feature into the world of convoluted storytelling. Under the careful writing of Emma Thompson, new complications in the lives of Elinor and Marianne instill entertainment rather than a dreadful sense of confusion.

That same sense of assuredness that runs throughout the screenplay is maintained by director Ang Lee. Lee, making his English-language feature film directorial debut here, eschews the digital visual effects gimmicks that would be so prevalent in his most recent directorial efforts (sometimes to successful results, sometimes to more mixed results) but considering the cast, script and sets he's got at his disposal, Ang Lee still finds way to dazzle the viewer even without the aid of gigantic CGI whale. In particular, Lee's direction of the actors does a great job of making sure these characters come across as individually distinct human beings instead of simply ending up as a smorgasbord of 19th-century European stereotypes.

Of these actors, screenwriter Emma Thompson especially impresses in the lead role of Elinor, I absolutely adore how well Thompson captures the characters unwavering affection for her siblings while also making sure that Elinor has a personality of her own seperate from her siblings. Playing opposite Thompson for much of the film is Kate Winslet in one of her first major film roles that see's her delivering such a strong performance that it's no wonder she managed to take off like a rocket as an actor after Sense & Sensibility. The supporting cast is stuffed with a gaggle of famous British talent (including a shockingly young Hugh Grant and a delightfully dry comedic turn from Hugh Grant) that ensure nary a scene goes by without some colorful supporting performance capture one's attention. Sense & Sensibility certainly knows how to best use all the famous talent at its disposal, particularly the artistic talents of Ang Lee, Emma Thompson and Jane Austen herself, it's only sensibile then that a movie with that skill would end up being so good!
Posted by Douglas Laman (NerdInTheBasement) at 3:53 PM