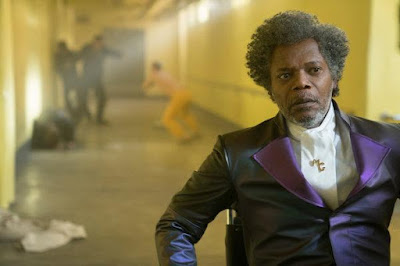 Why did Hollywood give up on Super Bowl weekend? Sure, the big game on Sunday saps a lot of business out of the box office, but we've had a whole bunch of hit movies opening over this unique weekend that proved that it wasn't an instant box office death sentence to open against the big game. Starting with the gargantuan $31.1 million bow of Hannah Montana/Miley Cyrus: Best of Both Worlds Concert Tour 3D in 2008, the subsequent five years saw five different movies (Taken, Dear John, Chronicle, The Woman in Black and Warm Bodies) all opening to over $20 million. Once 2013 came and went though, studios just stopped releasing enticing titles in this timeframe (the biggest weekend gross for a Super Bowl weekend new release since 2013 is the $13 million bow of Rings), leaving the box office a ghost town just like it was over this frame that saw Glass securing its third straight domestic box office victory.


Glass fell 49% this frame, a solid hold for the film that gave it another $9.5 million for a domestic gross to date of $88.6 million. Only $11.4 million to go before this becomes the first movie of 2019 to gross over $100 million. In second place, The Upside dipped just 26% this weekend for a fourth-weekend gross of $8.8 million, giving it a domestic gross of $75.5 million. Barring an out-of-nowhere plunge in the next two weekends, this feature is definitely crossing $100 million domestically. If and when it does that, it'll be only the second live-action movie Bryan Cranston has appeared in to cross $100 million, following Godzilla and Argo.

Miss Bala was the lone brand new wide release this frame, but it got off to a meek $6.7 million start. That's on par with the $6.74 million bow of New in Town in terms of past Super Bowl weekend newcomers and for a film with a $15 million budget, this Gina Rodriguez star vehicle came up short, though at least its lower theater count (Miss Bala only opened in 2,203) allowed it to have the second-best per-theater average ($3,041) in the top 22 movies at the domestic box office this frame.

Moving on to holdovers, there was a trend this weekend of strong weekend-to-weekend holds for holdover titles, including movies that have been playing in theaters for months now. Starting this trend was Aquaman, just kept on chugging this weekend by dipping only 34% to add another $4.7 million to its massive domestic haul that now stands at $323.5 million. Fellow December 2018 superhero blockbuster Spider-Man: Into The Spider-Verse also held well this frame as it dipped just 27% for a $4.4 million eighth weekend gross for a $175.2 million domestic gross. Yet another holdover holding nicely this weekend was Green Book, which dipped only 21% to gross another $4.3 million. This award season darling has taken in $55.8 million domestically. The Kid Who Would Be King didn't get much of a boost in its second-weekend as it fell 41% for a second-weekend haul of only $4.2 million and a domestic gross of $13.1 million. Considering The LEGO Movie 2 is around the corner, there's a chance The Kid Who Would Be King ends its domestic gross below $20 million.

A Dog's Way Home dipped just 31% this frame for a third-weekend gross of $3.5 million and a current domestic total of $35.9 million. Escape Room continued its impressively strong domestic run by easing only 29% this frame, giving it a fifth-weekend haul of $2.9 million for a $52 million domestic cume. After three separate days of theatrical release, They Shall Not Grow Old expanded into a traditional wide release this weekend which resulted in it grossing $2.4 million from 735 locations, bringing its domestic gross up to $10.8 million, making it the fifth documentary from 2018 to cross $10 million domestically. Right outside the top ten was Mary Poppins Returns, which dropped 42% this weekend for a seventh-weekend gross of $1.92 million, bringing this Rob Marshall directorial effort up to a $168.2 million domestic gross.

Bumblebee revved up another $1.9 million this weekend, a 36% drop from last weekend, for a $124.2 million domestic haul. Best Picture nominee Bohemian Rhapsody dipped only 27% this weekend as it gross another $1.8 million, bringing it up to a $208.5 million domestic gross. 2019's hysterical misfire Serenity plummeted 61% this weekend for a second-weekend haul of only $1.7 million. Having gross $7.5 million after ten days of release, it's anyone's guess if this movie can get past $10 million domestically. Dropping 41% this weekend was The Favourite, giving it another $1.5 million from 1,554 locations for a per-theater average of only $965 and a solid domestic gross of $28.5 million. The utterly outstanding domestic box office performance of Free Solo continued this weekend as the title went back into IMAX locations and had its biggest individual weekend gross yet nineteen weeks into its domestic box office run. Taking in $1.3 million from 483 locations (for a per-theater average of $2,872), Free Solo has now grossed $14.9 million domestically.