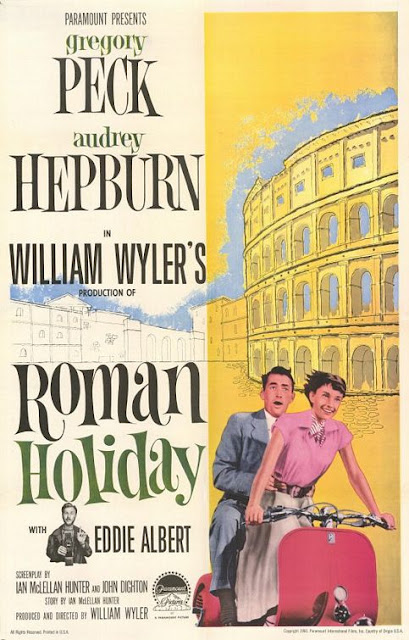 There's something exciting about going back to an iconic movie stars first breakthrough lead performance. Whether we're talking about early films starring Tom Hanks, Toshiro Mifune or Katherine Hepburn, that sensation of going back to a time when a revered household name was merely an up-and-comer looking for their big break is uniformly incredibly exciting. The same can be said for going back in time to the 1953 romantic-comedy Roman Holiday, an elegantly simple affair that served as the first star vehicle for Audrey Hepburn. Though now recognized as one of the pivotal figures of the American cinema scene, there was a time in the middle of the 20th century where Hepburn wasn't a widely well-known leading lady, though, of course, Roman Holiday changed all of that!


In this William Wyler directorial effort, Audrey Hepburn plays Princess Ann, a young figure of prestigious royalty who is expected to conform to the rigidly enforced rules of her family and the job title of princess. That's difficult considering Ann is a normal human being with desires of her own, a point emphasized in a humorous opening scene depicting Ann losing and subsequently trying to subtly retrieve her left shoe during an important royal ceremony. Ann wishes to actually go out and see the world instead of just adhering to all the rules and responsibilities of her job and one night, while her family is situated in Rome, Italy, she makes a break for it and leaves the palace so that she can finally have a normal day to herself.

The night she makes her escape, she has a run-in with Joe Bradley (Gregory Peck), a struggling newspaper writer so desperate for cash he's turned to gambling to make ends meet. At first, he just helps Ann without realizing who she is, but it isn't long before he realizes he's dealing with royalty. Seeing the opportunity for a big story, Joe decides to help Ann have the day of her dreams in Rome, an endeavor that takes up the majority of the plot. Like the trio of Before movies that would arrive decades later, Roman Holiday knows the immense entertainment value of having two characters played by great actors exchange thoughtful dialogue while being surrounded by splendid European locales.

The screenplay, penned by a trio of writers that included Dalton Trumbo, is a fantastically crafted piece of work that's especially good at creating extra unspoken layers of importance to various seemingly mundane elements throughout the story. This is obviously true in regards to the two lead characters, who conceal their true identity and motivations from the others, but it also applies to activities they engage in throughout their journey through Rome, Italy. For instance, a scene showing Ann going to get a haircut doesn't take place at an elaborately fancy barbershop, nor does it have Anna dropping dialogue to indicate that this particular outing is something special. To passerby's, her whole experience here would simply look like a run-of-the-mill haircut.

But the script has done such a fine job of establishing how much Ann's individuality has been stifled by her royal superiors that the scene still carries character-based substance. Seeing Ann get to have her hair cut to her desires is something she's been looking forward to for ages, even when she's acting like she's just another tourist, both the script and Audrey Hepburn's performance perfectly communicate just what a monumental moment this is for Ann. A sense of unspoken significance runs throughout Ann and Joe's time together in Rome, Italy and lends some effective substance to already entertaining scenes like the iconic sequence where Ann takes herself and Joe on a clumsy drive on a scooter.

This kind of character that relies so heavily on under-the-surface motivation would be a daunting challenge to any actor but Audrey Hepburn, in her first lead role no less, is utterly remarkable in such an effortless manner in portraying the part of Ann. There's such engrossing exuberance in Hepburn's work here in how she depicts Ann's desire to see the larger world she's been isolated from that you immediately become enamored with her personal quest to experience all that Rome, Italy has to offer. Hepburn also shows some spectacular comedic chops throughout her performance, the best of which may be how she partakes in a climactic fight scene by way of whacking a dude over the head with a guitar, a moment that certainly left me in hysterics.

Playing opposite Hepburn is Gregory Peck, a more experienced Hollywood leading man who had already been nominated for the Best Actor Oscar at least three times before he headlined Roman Holiday. The contrasting experience in headlining movies between Hepburn and Peck makes for a nice meta-parallel between their characters contrasting experience with the real world, but even separated from that, Peck works as both a great performer for Hepburn to interact with and an actor who's able to make a character like Joe one the audience is actually interested in instead of just being turned off by his more selfish desires. Audrey Hepburn and Gregory Peck are both in top-notch form in Roman Holiday and the same can be said for both the trio of screenwriters and William Wyler's direction, so it's no wonder this romantic-comedy ends up being so great that it's no wonder it managed to launch Audrey Hepburn into superstardom.
Posted by Douglas Laman (NerdInTheBasement) at 12:37 PM