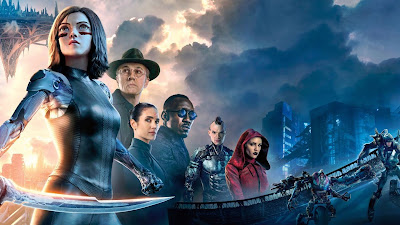 Note: All figures discussed in this piece are for the three-day weekend unless stated otherwise.

20th Century Fox, the studio behind Sunrise: A Song of Two Humans, Alien and The Sound of Music, got to release their last movie before they're absorbed into the Disney conglomerate. At least they got to top the domestic box office one last time with Alita: Battle Angel, which grossed $27.8 million this weekend. Having grossed $36.5 million since its Thursday launch, this one's actually managed to beat out box office tracking that suggested it wouldn't be able to top $25 million in its first five days of release and came in ahead 50% of the opening weekend of Ghost in the Shell despite burning off demand on Thursday, but it's still a far from ideal showing for a movie that cost $170 million to make.


20th Century Fox was right in delaying Alita seven months to the President's Day frame they've heavily utilized this decade (with titles ranging from The Lightning Thief to Deadpool) since Alita basically functioned as the only tentpole in the marketplace in the first two months of 2019. They also heavily pushed the film at every major convention (SXSW, SDCC, etc.) in the past year, but all the marketing bru-hah-hah couldn't push Alita into the next level of box office success, even if it did keep it from becoming the next Valerian or Jupiter Ascending. Look for Alita to finish its domestic gross at only $80-85 million, they better hope for some massive international box office on this one.

The LEGO Movie 2: The Second Part dropped 37% this weekend for a second-weekend haul of $21.2 million, a slightly better second-weekend hold than The LEGO Batman Movie. This newest LEGO movie has grossed $62.6 million after ten days of release which is below the opening weekend of the original LEGO Movie. It looks like the newest LEGO movie is headed for a final domestic total of only $110-115 million.

Also debuting this weekend was Isn't It Romantic, which grossed $14.2 million and has grossed $20.4 million since it debuted on Wednesday. This film apparently cost $31 million to make, so this title came in slightly under expectations but it's not an outright bad debut, especially for a fantasy romantic-comedy, a subgenre that's littered with box office duds like Ghosts of Girlfriends Past.

Speaking of high-concept rom-com's, What Men Want had a solid 40% hold this weekend to gross another $10.9 million. After ten days of release, this comedy remake has taken in $36.1 million, already nearly doubling its $20 million budget.

The big surprise of the weekend has got to be the severe underperformance of Happy Death Day 2U, which grossed just $9.81 million this weekend. That's one of the weakest opening weekends ever for a Blumhouse title, coming in only a few thousand dollars ahead of the opening weekend of The Gallows. Its five-day gross of $13.5 million is only slightly more than half of what the original Happy Death Day took in in its opening weekend. This is an unexpectedly poor performance for the feature, which I guess didn't generate enough goodwill from audiences to warrant a sequel, one whose marketing didn't do enough to differentiate itself from its predecessor. This new Happy Death Day installment will finish its domestic gross in the neighborhood of $25-30 million.

Spider-Man: Into The Spider-Verse dipped 35% this weekend to gross another $1.9 million for a domestic gross of $182.7 million while fellow December 2018 superhero movie, Aquaman, went down 41% this frame for a ninth weekend gross of $1.88 million for a domestic gross of $331.3 million. This takes Aquaman past the domestic gross of Batman v. Superman to become the second-biggest DC Extended Universe movie ever. In its third weekend of wide release, They Shall Not Grow Old dropped 42% to gross another $985,000 for a $15.2 million. Interestingly, this WWI documentary was ahead this weekend of another wide release in its third weekend of release, Miss Bala, which grossed $970,000 (a 64% drop from last weekend) this frame for a current domestic total of $13.8 million.

In a bid to get it past the $200 million domestic box office mark, Disney brought Ralph Breaks the Internet back into 1,354 locations this weekend, which resulted in it grossing $916,000 for a per-theater average of $677 and a domestic total of $198.6 million. Yep, this one should just narrowly get past the $200 million mark domestically. Speaking of movies doing location expansions, A Star is Born went back into wide release (843 theaters, to be precise!) in its twentieth weekend of release, where it grossed another $810,000 for a per-theater average of $961 for a domestic total of $209.8 million. Arctic expanded its location count this frame to 63 theaters where it grossed $256,510 for a per-theater average of $4,072. That's actually a decent hold from its per-theater average from last weekend, so maybe some good word-of-mouth is working in this titles favor. Arctic has grossed $445,094 after three weekends of limited release.

The top 12 movies this weekend grossed a total of $109.1 million, one of the worst seventh weekends of any year in the 21st century. February 2019 has so far grossed around $383 million and next weekend is going to have to work overtime to make sure this month doesn't fall behind the $510.1 million monthly haul of February 2000 for the title of lowest-grossing February in the 21st century. A lack of enticing titles in the marketplace is just killing the 2019 domestic box office so far and I'll be curious to see if more high-profile March 2019 titles like Captain Marvel, Us and Dumbo can reverse course for what's so far been a dismal year that's falling 19-26% behind the domestic box office hauls of the last five years.
Posted by Douglas Laman (NerdInTheBasement) at 10:48 AM