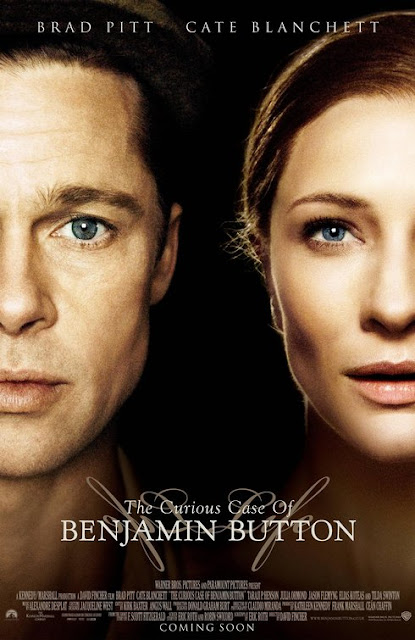 When a movie makes a whole lot of money, the studio behind said movie (as well as other rival studios) tend to want to replicate that box office success. Normally this is done through sequels, spin-off's, cinematic universes, all that jazz, but back in the day it was a lot more common for studios to just make new movies that were clearly executed in the mold of prior box office successes. For example, two of the biggest movies of the 1990s for Paramount Pictures were its pair of Best Picture winners Forrest Gump and Titanic. Making sequels to such lucrative movies is a problematic idea because, for Forrest Gump, the key creative people behind that movie are just so busy while for the problems with making 2 Tit 2 Anic should be self-evident.

This is total speculation on my part, but The Curious Case of Benjamin Button feels like an attempt by Paramount to replicate the success of both of those movies. Certainly, Benjamin Button's framing device of its titular lead character telling his story about living through several decades of American history (complete with a Southern accent) echoes Forrest Gump heavily. Meanwhile, the feature also carries the tragic romance surrounded by oodles of pricey VFX angle that Titanic had. In the process of hewing so close to these two motion pictures, The Curious Case of Benjamin Button becomes a movie lacking in its own identity. It's the kind of film that wants to move you to tears but it does so in such a mechanical fashion that even an emotional sap like me is left dry-eyed by the end of the tale.

In case you're unaware, the curious case that the title is referring to is Benjamin Button's (Brad Pitt) peculiar condition of aging backward. He starts out life as a wrinkly old man baby and then proceeds to get younger as life goes on. As a child, he develops a friendship with a young girl named Daisy (played by Cate Blanchett as an adult) and when they both grow up, the two have a romance that spans decades and countries. All the while Benjamin has a number of adventures over the year, including his time on a fishing vessel, serving in World War II and taking over a button factory that all impart valuable life lessons to himself and the audience.

The primary issue with The Curious Case of Benjamin Button is that it's a movie a bit too concerned with coming off as profound or thoughtful. Everything is filtered through such rose-tinted glasses that there isn't much actual humanity to be found, the world this story takes place in is so buttoned up that it feels like it could be occuring on a whole other planet. A ludicrous premise like this one (which comes from an F. Scott Fitzgerald short story) is far from impossible to pull off but the execution here goes the odd route of trying to make the supposedly normal world around Benjamin Button as divorced from actual reality as he is. To boot, Benjamin Button as a character is an oddly muted fellow who never seems to experience true euphoria or true sorrow, he's always at a mellow tempo like some kind of chill surfer dude, which is not an ideal protagonist for a movie that's trying to be an emotion-driven story. The result is a movie that just doesn't have any grounding in human experiences, just treacly fortune cookie visions of what human experiences are.

How strange to say that about a movie from director David Fincher, the man who made billionaire Mark Zuckerberg's ascension to power something deeply rooted in recognizably human turmoil and flaws. Fincher is a master at making intense riveting features that get under your skin because of the way they echo reality, but here, the story of Benjamin Button that Fincher is working with (Eric Roth and Robin Swicord penned the screenplay) just doesn't succeed in channeling actual humanity, leaving the emotional elements flat when they should be soaring. Meanwhile, setting the story across so many different periods of American history really doesn't play into the proceedings at all once we get past World War II. A clumsy ending that can't seem to decide which visual motif to end things on solidifies the overall messy nature of the screenplay.

At least Fincher's directorial skills come through in the strong performances he gets out of the top-notch assortment of actors he's working with here. The weakest link of the performances, though, would actually be Brad Pitt in my book, he's decent but he doesn't lend much distinct personality to Benjamin Button and the scripts aforementioned problem with making Benjamin such a muted character leaves Pitt without much to work with. Cate Blanchett, on the other hand, at least gets to have a lot more to do (like in Forrest Gump, the love interest in Benjamin Button experiences a far more tragic life than the protagonist) which allows her to show off more of her gifts as a performer. In supporting roles, Taraji P. Henson, Mahershala Ali and especially Jared Harris impress with some of the more recognizably human turns in a movie that too often feels lacking in humanity.

Like many of Fincher's films, The Curious Case of Benjamin Button also looks gorgeous in terms of art direction and production design while the lush cinematography effectively evokes the glossy sweeping nature of classic epic films from the mid-20th century. Less successful on a visual level are the digital effects used to de-age Brad Pitt late into the film, the moment the character begins to look like he's in his 20's, his skin looks like it's made out of plastic to an egregious degree. Things only get worse from there, particularly one of the final scenes showing a digitally aged-up Cate Blanchett and a CGI version of 12 year-old Brad Pitt that's supposed to be heartbreaking to watch but merely looks like a deleted scene from The Polar Express. Perhaps if there was more substance or entertainment in the storyline these visual effects shortcomings could be more easily dismissed but instead it becomes yet another instance of how The Curious Case of Benjamin Button ends up being so curiously underwhelming.
Posted by Douglas Laman (NerdInTheBasement) at 2:57 PM