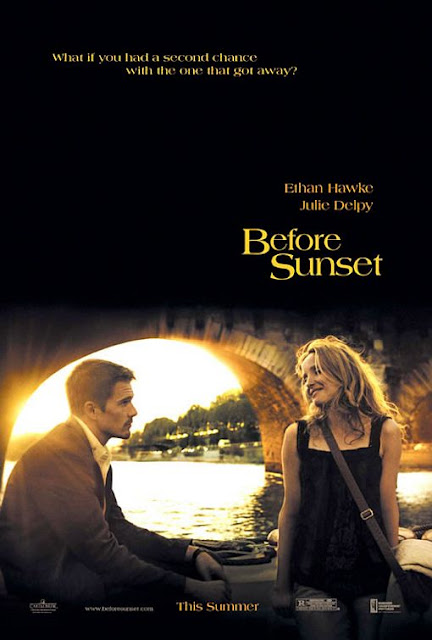 It took me six years, but I've finally watched all three of Richard Linklater's Before movies. I inadvertently decided to watch these in an order that is guaranteed to understandably make many people's skin crawl as I first watched Before Midnight in its initial theatrical back in July 2013 before finally getting around to Before Sunrise just last August and then finally coming around to Before Sunset on Valentine's Day 2019. This wasn't my long-game attempt to create some kind of Machete Order for viewing these three movies, it was merely my inability to watch the original two movies before seeing Before Midnight combined with me taking forever to get around to watching its two predecessors.

My viewing order was dorky, no question, but at least it hasn't inhibited my enjoyment of Before Sunset and its two miraculous sibling films. Taking place about nine years after the original movie, Jesse (Ethan Hawke) is now the author of a book that's clearly based on his own experiences with Celine (Julia Delpy) in Before Sunrise. At one of the last stops on his European book tour, Jesse and Celine run into each other and decide to spend the next hour or so together just walking around Paris, France and catching up on what's been going on in their lives. Much has changed for both of them in the nearly decade since they last saw one another as a fantastically romantic night in Vienna has given way to heavy-duty doses of reality, including the passing of Celine's grandmother.

Among its many accomplishments, Before Sunset is another reminder of how Richard Linklater's films do not get enough credit for their visual sensibilities. Because his works are grounded dialogue-driven affairs that typically don't use flashy camera movements or visual techniques, it's easy to take for granted just how much the subtle visual elements of his works contribute to their overall quality, especially in regards to the editing. On that note, I say huzzah and Excelsior to Sandra Adair, Richard Linklater's go-to editor dating all the way back to Dazed and Confused in 1993, her work as an editor across his filmography is truly impressive and her editing on these Before movies, including Before Sunset, is especially superb.

Early on in Before Sunset, Jesse is regaling reporters at one of his promotional stops with a story that's intercut with footage of Celine from Before Sunrise and then, without warning, we cut from one of these pieces of flashback footage to the first image of Celine in the present-day watching Jesse tell this story. It's an excellent piece of editing from Sandra Adair that took me totally by surprise, at first, I thought this new piece of footage was still a flashback! Beyond just functioning as an effective visual shock, this particular edit does a great job of visually communicating how abrupt the sudden reemergence of Celine must be to Jesse, he's so used to thinking of her as a figure of the past that seeing her once again as a figure of the here-and-now is as much of a shock to him as the aforementioned briefly disorienting piece of editing from Sandra Adair was to me!

Adair's editing continues to impress throughout the rest of the movie, particularly in terms of how she allows shots to linger for extended periods of time so that the flow of conversations between our two characters won't be interrupted. Similarly turning in sublime work here is the trio of screenwriters, which consist of director Richard Linklater and both of our lead actors, Ethan Hawke, and Julie Delpy. I'm constantly impressed with how these three effortlessly make watching people waltz around Europe and exchange dialogue so riveting, but they keep on doing just that. Who needs a barrage of action when you've got Julie Delpy telling a hysterical story about a lecture she received on the virtues of firearms from a New York City cop?

The three writers are also great at communicating an undercurrent of melancholy in the duo's interactions as the thought of what might have been had they managed to actually keep in touch years ago is an omnipresent force throughout the entire movie. It's a powerful atmospheric element of Before Sunset that's also communicated in the excellent lead performances. Hawke and Delpy are just as good in their chemistry together as performers as they are as screenwriters and I love how they portray how these two characters have both changed and stayed constant in the intervening years since they last saw each other. Taking this nuanced approach to depicting the characters of Jesse and Celine in this particular part of their lives is a realistic touch that feels quite fitting for a movie this in touch with reality as this one.

Just when you think maybe they've matured into wholly different people, Hawke or Delpy will brilliantly pull out some piece of body language or a memorable line delivery that reminds the viewer that these are still the same college kids from Before Sunrise. From these performances to Sandra Adair's editing to Richard Linklater's sublime directing, every aspect of Before Sunset reinforces how the past and the present can intersect in fascinating ways and it makes for a quietly powerful wistful experience that I absolutely adored. Though I didn't go in the organic or even intended way of watching these movies Before Sunset made for a phenomenal way to cap off my first time viewing of the assorted films in one of the greatest film trilogies of all-time!
Posted by Douglas Laman (NerdInTheBasement) at 12:23 PM